For Kenny and Amanda Smith, always is never enough 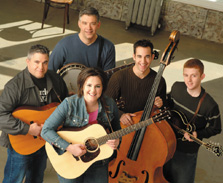 The high and lonesome married singers still love a good old-fashioned 'pick' to the point where this summer, they scheduled a break in their tour to jam and hang out with some old time fiddlers.

Calling from Galax, Va., the Smiths are camping out with a flock of fiddlers, enjoying some all-night picking sessions at the 70th Annual Old Fiddler's Convention.

According to the festival's website, a newspaper item from 1935 states that the convention was dedicated to "keeping alive the memories and sentiments of days gone by and make it possible for people of today to hear and enjoy the tunes of yesterday."

Seven decades later, it's not surprising to learn that this same spirit of togetherness and preservation of old time traditions are still what fuel the fiddle festival and bring bluegrass lovers back year after year.

"Every year, we camp down here for a week," Kenny says. "There is a lot of good music going on, and there is also a lot of camping. Usually, around four or five o'clock in the afternoon, everybody starts pickin'...a lot of times, we'll pick all night long."

"That's sort of how the band got started. Every year, we always looked forward to going to this thing. It was a chance for me to sing with Amanda and all of her friends...it turned into a career move for us."

Hangin' out at this fiddler's fest also turned into a career move for the band's latest addition - mandolin player Jason Robertson. Robertson, who joined the band prior to the recording of "Always Never Enough," recently released on Rebel, is also the group's youngest picker, who grew up near Galax in Giles County, Va.

"He's a young boy we met down here at the Fiddler's Convention," Amanda says. "We met Jason through some friends of ours when all he could do was chop a mandolin. We watched him progress all these years, so it was nice to get him to play with us. He had played with maybe one local group before joining us. So, when our other mandolin player left, he was the first one we called."

Since the release of "Always Never Enough" in July, the group has been ramping up their publicity machine, having made an appearance on both the popular Nashville breakfast TV show Tennessee Mornings with Charlie Chase and Kelly Sutton and gracing the Grand Ole Opry stage for the second time in their young careers.

"We had a good response," says Amanda of the Opry show. "We also played the Ryman, opening for Ricky Skaggs at the end of June and got a standing ovation."

"Always Never Enough" continues the band's bluegrass evolution by showcasing heartfelt harmonies and combining a mix of traditional and modern compositions. The Tim Stafford and Steve Gulley title track kicks off the disc on a memorable note, with Amanda's candy-coated lead vocals singing about a "pillow-top sky." Kenny describes this song as "an identifier for our sound," a sound marked by songs with storied lyrics.

"It starts with the words," Kenny says. "We always look for a strong song ...we like story songs such as 'Danbury Jail' and 'Young Heart'...they are story songs. Then we just go with what we think might fit our sound. From the past two albums, we have got a sound and style that we are going after. We will usually start with two to three songs and then pick the songs that will work with those."

With three albums now under their bluegrass belts, the Smiths admit that they have found some favorite songsmiths that they return to again and again for material.

"We like Becky (Buller), and we always contact her before making a record," Kenny says. "She usually has something that we like...we also like Steve Gulley and Tim Stafford. Most of the people that we contact, it's important for us that the song makes sense...not only does it have a good beat or a good melody, but we like the words most of all."

While the band has penned their own compositions in the past, other than one song their bassist Alan Bartram contributed ("She's On My Mind"), there are no other Kenny and Amanda Smith Band originals.

"We had so many good songs that other people had written that we really didn't need anything else for the album," Kenny reveals. "We have a couple of older songs on there. A good friend of ours has a pretty extensive record collection with a lot of older kind of obscure country songs...so we had a couple of those on there. Mel Tillis' 'Thousand Miles to Go' is one of these. Probably the oldest song on the album though is 'Going Across the Sea'...that goes back a long ways...it's a traditional song. When I was learning how to play the clawhammer banjo, I found that song on a clawhammer banjo record. We arranged it and just took the words and went with it."