After growing up in a home where the love of the English language was a way of life, it would have been unnatural for James McMurtry to be unaffected by that environment.

But rather than follow the lead of his famous novel-writing father or his school teacher mother, he found his own way of lyrical expression by writing and singing songs. 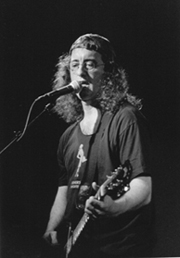 His father, Larry McMurtry, is best known for writing the books "Lonesome Dove" and "Terms of Endearment." His dad also pointed him toward country music at an early age by playing that music regularly around the house.

But it was his mother who aided him in learning the guitar. She taught him some chords when he was seven years old.

For a time, he actually believed he didn't like to read books because of the way he approached them. "I don't read like everyone else," says McMurtry in a telephone interview from his home in Austin, Texas. "I put my life on hold until I finish the book. And I'm not a fast reader. I have good comprehension and retention, but it takes me a while. But I read more now than I used to. I think it's something I've grown into."

McMurtry, 42 in March, was born in Fort Worth, Texas, but grew up in Leesburg, Va. He attended the University of Arizona where he studied English and Spanish. His moving around has played a part in the type of music he plays and the sound of that music, but in mostly non-specific ways.

"I think my music is shaped by every place I've ever been," says McMurtry. "I think I might have learned a bit about guitar tone by being in Austin. I wrote 'Lights of Cheyenne' even though I never lived in Wyoming, but I traveled through there before."

"Lights of Cheyenne" is one of 13 songs on his new disc "Live in Aught-Three," the first for his new label Compadré Records.

He issued three albums for Columbia Records, beginning in 1989 with "Too Long in the Wasteland," produced by rocker John Cougar Mellencamp. The connection with Mellencamp happened because of the tie between McMurtry's father and Mellencamp, a result of the filming and production of the movie "Falling From Grace."

Of his association with Mellencamp, McMurtry says, "It was like working with a competent and gruff football coach. He knew how to get things done."

Yet, McMurtry's influences were more country than rock, though he admits to finding some direction in the music of The Band. "I grew up listening to Kris Kristofferson," he says.

But the real spark that came from Kristofferson wasn't in the well-chosen words or the memorable melodies. "I saw both Kristofferson and Johnny Cash play live," says McMurtry. "They looked like they were having such a good time on the stage. I said that was what I wanted to do."

In reality, he isn't having quite as much fun as he saw those legends having.

"While we're up on the stage playing, we have a great time," says McMurtry. "It really is as much fun as I thought it would be."

After two more albums on Columbia, "Candyland" and "Where'd You Hide the Body," McMurtry switched to Sugar Hill where he released three more discs. "It Had to Happen" came out in 1998 and won an American Indie Award. "Walk Between the Raindrops" and "Saint Mary of the Woods" followed.

Two of those discs were produced by country legend Lloyd Maines, who gained great notoriety as a player and a producer before becoming even more widely known for having a Dixie Chick for a daughter.

Then came the time for him and Sugar Hill to part company, and the separation point came over the release of this new album. "I'd always wanted to do a live album," says McMurtry. "Sugar Hill said they didn't want it."

So McMurtry went searching for a new record label and found one in Compadré. He is quite pleased with the switch.

"They seem to be doing a really good job," he says. "They are aggressive and hungry. I don't remember ever knowing this much about what was going on in the past. They are keeping me in the loop about the promotion of the record and ' who's writing about it and who's playing it. They are just starting up, and they need to make money with every release. It's not like a bigger company where they can have an album or two not make money and another album will make up for it. They are trying to make this album successful."

"Live in Aught-Three" should both please long-time fans as well as provide a solid introduction to the singer/songwriter's songbook. The songs span his recording career, and because McMurtry doesn't do 300 shows a year any more, it gives his fans a chance to experience him live in a way they might not otherwise get the opportunity to do.

McMurtry is a bit reluctant to talk much about the quality of the album because "I really haven't heard it in quite a while."