Greg Brown isn't a name familiar to many country music fans. Though a strong and respected singer and songwriter, he has never hit the charts with his records or songs .

Brown has become a household name only in those houses where folk music still reigns supreme. Even though Willie Nelson has recorded his songs, as has Mary Chapin Carpenter, his writing is more likely to show up on albums by Shawn Colvin and Carlos Santana than Toby Keith or Patty Loveless.

But with his 18th studio album, "Honey in the Lion's Head," released by Trailer Records in January, this Iowa native has captured much of the rootsy feel that has proven popular among country fans in recent years . 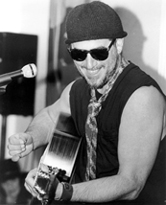 The album is a tribute to the folk songs he grew up learning and loving in his very rural upbringing. The rootsy-sounding album had been planned for several years, but finding the right time to put it together was far more complicated than the music it contains .

"I'd tried to go into the studio before to record this," says Brown from his home in Hacklebarney, Ia. "But the feeling just wasn't right. So, finally I got my buddies from home together, and it clicked ."

Some of those "buddies" included his wife Iris DeMent, a well-respected recording artist in her own right, and daughters Pieta and Constie. A third daughter, Zoe, helped with the album's artwork. Included are longtime sidekick Bo Ramsey, who has worked with Lucinda Williams and co-produced and played guitar, and Bob Black, who has work with Bill Monroe on his resume .

The fact that the album has been released for the smaller neighborhood label, Trailer, also seemed more appropriate than his regular label, Red House .

"Certain projects feel more like Trailer projects," says Brown. "The ones that are funkier and more low key. I put out another Trailer record about three years ago. It's an advantage I have in being on an independent label. Red House actually helped Trailer by making available my customer list. I don't have A&R guys telling me what I should be putting out. It gives me great freedom in what I do ."

Freedom has been part of Brown's upbringing, and music has gone hand-in-hand along the way. Hackleberry is a section of southeastern Iowa where Brown was raised. His grandmother was a poet, and his granddad played banjo. His mother was an electric guitarist, and his father was a Pentecostal preacher. All of those influences and exposures brought music into his life at every turn and would profoundly influence his life and career choices .

Though his father's career as a preacher kept the family moving, it never moved them out of the Midwest. In his father's churches, he was exposed to gospel music and hymns. At home, many different styles existed. His mother was a teacher, and Brown was raised for an appreciation of the printed word. His voice is a window-rattling baritone that shows only a little of the classical vocal lessons he received as a youth .

After winning a contest to play an opening set for folk legend Eric Andersen, he headed to New York at age 18 and fell into the Greenwich Village folk scene. He also ventured to the left coast to check out the musical climate there .

But home was in Iowa, and he would soon return there to try and forge a career with the knowledge he learned from his travels and the music he had learned from home .

He formed his own record company, pressed a couple of albums, but still was frustrated and nearly ready to quit the business completely .

But he got some national attention through a gig on National Public Radio's Prairie Home Companion. He became a regular on that program for four years and still is a frequent guest on the program. That led to national touring and forced Brown to turn over the label duties to Bob Feldman. That became Red House Records .

But city life and travel never took away the connection with the simple life mirrored in the songs of "Honey in the Lion's Head ."

"I just love those poet songs," says Brown. "The thing about those songs is that they've got so much life in them. Folk songs are passed down from performer to performer, and they pick up things in the process. By the process folk songs go through, they get real big. That's the very thing that makes them sound so rich. It is similar to country blues in that way I guess. There's a lot of music and a lot of stories. Some people can't wait to grow up and get to the big city. My whole life of music is tied to family jam sessions ."

Ten of the new disc's 12 tracks are public domain songs, and only "Ain't No One Like You" was written by Brown .

It isn't the first time Brown has released a disc of songs not based on his own material. In 1986, he put some poems of William Blake to music for the album "Songs of Innocence and of Experience ."

Brown isn't too concerned about where the audience for the new disc will come .

"When I did the (William Blake) disc, it found acceptance when I didn't know if it would," he says. "I hope people will find something to like in these songs that have meant so much to me. I don't really think too much about the sales end when I record. But I think it's a good sign for American music in general that a lot of older music is being re-released. It's so rich ."

Included in that trend was the widespread popularity of the "O Brother, Where Art Thou" soundtrack and subsequent releases by several artists, most notably Patty Loveless .

He recorded "One Big Town" in 1989, and it earned him his first NAIRD (National Association of Independent Record Distributors) Indie Award for Adult Contemporary Album of the Year, as well as three and a half stars in Rolling Stone magazine. He has had other critical successes like "Dream Café" from 1992, called an "unassuming triumph" by The Washington Post. Brown recorded "Friend of Mine" with Bill Morrissey and garnered his first Grammy nomination. He also dipped his toe into children's music with "Bath Tub Blues ."

One change in the radio landscape helped put him on the map in 1994 with "The Poet Game." The Gavin Report released a chart for a new radio format they termed Americana. "The Poet Game" received strong airplay in that format and actually topped that chart. It also drew plaudits in the pages of national publications and won a NAIRD Indie as Singer-Songwriter Album of the Year .

His 1996 release "Further In" drew raves and the follow-up, 1997's "Slant 6 Mind," got Brown his second Grammy nomination. In neither of his two Grammy nominations did he attend the ceremonies offering only that he refuses to see music as a competition of one performer against another .

During those years, it wasn't uncommon for Brown to have more than 200 gigs and travel plans that criss-crossed the country. But the pull of home, love of family and his own lack of superstar ambition have cut those dates by more than half .

"It's gotten much easier for me now," says Brown. "It's been that way the past three or four years. (In 2003,) I'll have had 50 gigs and about 70 days out on the road. There is a seductive thing about the road. For some artists, the road is home. I know of people like that. They just have to do it. I have done well and have been supported by community radio. It has amazing how many little community radio stations are still out there ."