When a singer's career is doing well and on the rise, life is good. But life also brings its pressures - can the upward trajectory continue when a new album is out? Will the fans accept it? Such has been the case for country traditionalist Brad Paisley, who just released his fourth disc, "Time Well Wasted.

And he is off to not too shabby a start either. The record far exceeded sales of any his previous albums thanks to 192,000 sold the first week out and being the second biggest selling album in the country the week it was released in mid-August. 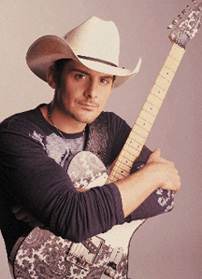 Having a big hit single with the rowdy, yet serious, "Alcohol" hasn't hurt either.

"I definitely care how it'll do as far as that goes," says Paisley in a cellphone interview on a stormy afternoon while getting ready for sound check in Des Moines, Ia. "I'd really love for people to enjoy this record more than anything else.

"I also said when I was making this record, I was making it for the people who actually buy it rather than the people who get it in the mail," he says, referring to journalists, who have been very praiseworthy throughout his career. "They're really not the same thing. I focused more on what I like and what my fans like. So that is important to me - if somebody spends money on it.

"What I really want is for someone who spent a hard earned $15 to be glad to be willing to purchase it all over again," he says. "If it had a scratch, if they break it, they'd buy it. I've had that happen. I did that so many times.

Paisley has enjoyed a big hit single right out of the box with "Alcohol," a song he wrote by his lonesome. "Alcohol" takes a different story tack with alcohol being the storyteller, relating the good and bad aspects caused by imbibing.

"I'm medicine and I am poison/I can help you up or make you fall/You had some of the best times/you'll never remember with me," sings Paisley.

Most of the song tends to take a humorous bent with lines like "I can make anybody pretty/I can make you believe any lie/I can make you pick a fight/with somebody twice your size.

Interestingly enough, this is the second straight album with a drinking themed song as a single.

But unlike his hit, award-winning single, "Whiskey Lullaby," his hauntingly, ultra sad duet with Alison Krauss, "Alcohol" seems to cut across both sides of the drinking aisle. The song can be seen as both an admonition against drinking too much as well as having a devil-may-care attitude.

The song has taken on a life of its own with a party atmosphere on the recording. And due to the line about "I'll be you a drink or two/that I can make you put a lampshade on your head," fans have taken to showing up at concerts wearing lampshades.

"I was in the hunt for a first single around the time I wrote that," Paisley says. "I was sort of looking for that song, which would be a good lead off. I wrote that, and I still felt it wasn't the first single. I felt it was really cool, but I didn't feel it was a lead-off song. I started playing it in concert, and the reaction was great, the lines that got a rise out of people. It seemed like maybe this was what we needed to do.

Paisley's long-time producer, Frank Rogers, says Paisley wrote the song about two days before going into the studio for recording one of the earlier batches of songs. Due to touring commitments, Paisley and Rogers made the album over about a nine-month period.

"We went in and recorded it more as an album cut. Then, he started playing it live," says Rogers from his Nashville studio.

"We started thinking we needed to record this thing as more of a single mind-set and make it a bit of a party song. So we went in at a later session with a different take on it because of the reaction he was getting live.

Initially, "Alcohol" was "a little more mid-tempo and almost introspective sounding," says Rogers. "It was more of a commentary song. There was none of that sing-along stuff. It was that third person commentary. We went 'this thing needs to be a party anthem'.

Paisley also changed the song lyrically, according to Rogers.

"The first time we recorded it, it didn't have the second line of putting a lampshade on your head," says Rogers.

"Then...he started tweaking the lyrics, and then they got a little more fun," says Rogers.

Paisley says, "When I write about life in general, I pick something that's a common thread throughout. One of the things is that alcohol is a big part of your adult life - it's at weddings, college or high school. You'll have it on holidays. It's one of things that's there for the greatest memories you might have.

Don't expect Paisley to live up to the words of the song, like alcohol "helping white people dance.

Chances are that "Time Well Wasted" will not be a one-hit wonder for Paisley, at least based on his track record.