Chely Wright traveled a bumpy road, going from the Academy of Country Music's Top New Female Artist in 1994 to not being sure if she'd make or even want to make another record. But during a hiatus away from performing when she didn't even have a label, Wright found the inspiration to try it again, and she found it in an odd place.

It came one night in The Metropolitan Hotel in London, more than just a stone's throw away from her residence in Nashville and even further from her childhood home in Wellsville, Kansas. 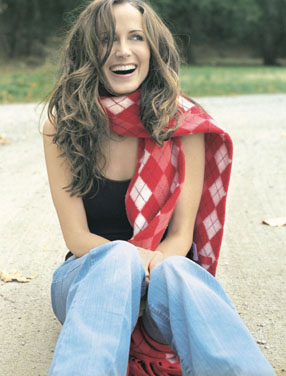 Wright was performing in Europe and had a couple of friends along for the ride. After the shows were over, the trio traveled to London to sightsee and checked into The Metropolitan Hotel.

"I had never vacationed in my adult life," admits Wright in a telephone interview from the offices of her new label, Dualtone, in Nashville. "We were traveling in the car. My friends were singing along to a song that I'd never heard. I asked them what the song was. They couldn't believe I'd never heard it. It was 'Upside Down' by Diana Ross. I have an Ipod, and I travel with a lot of music. We went shopping for CDs scouring over the bargain bins. We ended up with hundreds of CD and a jam box."

Arriving back at the hotel they gathered together in one room to listen to some music prior to an 8 p.m. dinner reservation.

"We started playing songs for each other," says Wright. "It turned into a situation of one-upsmanship. Someone would play something, and we'd all be impressed, but then someone else would say, 'I can top that, just listen to this.' We were listening to all kinds of music. About 2 a.m., we had clearly missed dinner, we were so engrossed in the music."

That night she made a statement to her friends. "I told them I might not want to make another record," says Wright in reference to some past dealings with record labels that left a less than positive aftertaste. "But I told them if I did make another record, it was going to be with songs like the ones they had played for one another that night."

Wright had to question her own sanity in trying again to make her mark in country music. "The definition of insanity I think is doing the same thing over and over and expecting a different result," she says. "But I found that I didn't need a record label to make a record."

Why wouldn't she want a label? Well she was shifted around quite a bit from Mercury to Polydor to A&M and then back to Mercury. "It sucks to get adopted," says Wright. "I earned eight CMA and ACM nominations, so I had a good run."

"Single White Female" reached number one status. "It Was" peaked in the top 10. "Shut Up and Drive" and "Jezebel" both reached the top 20. But the experience left her feeling like a bit more attention was paid to the glamour and promotion side of the business, and not nearly enough time was spent on the songs.

While waiting to decide whether she was going to plunge back into the business and in what capacity, Wright took her first break from performing. It lasted a year. "I stayed in my pajamas, watched the news and was kind of a real person," she says. "It was a very good thing for me creatively. I own a bunch of houses. I'm a landlord."

But the desire to create was too strong to deny, and it beckoned her to write songs and to record demos of them in her home studio despite still not knowing whether they would ever become more. One of those songs eventually grew to be a hit that moved her back into the fans' focus.

"Bumper of My S.U.V." came out of her own life's experiences. "I was out driving, and this woman in a minivan flips me off," says Wright. "I thought I had cut her off because I'm a bad driver. So she pulls up next to me and motions for me to roll down my window. So I do, and as I start to apologize, she starts yelling at me about supporting a war that wasn't right and was morally wrong. When I went home I wrote the song and recorded it in my studio. I never played it for anyone."

For those unfamiliar with "Bumper," it tells the tale of a woman who puts a bumper sticker for the U.S. Marines on the back of her vehicle because she has a brother in the Marines overseas and a family history of serving in the military.

In the song, she questions how someone can accuse her of supporting war and killing people just because she supports the military.

"I have been playing shows for the military for a long time," she says. "I was getting ready to go over and play some more dates at military bases. I was clearing out my hard drive on my computer of some songs, and I came across one called 'Bumper.' I played it, and I thought 'Oh my God, I forgot I wrote that.' So before one of the shows, I had my guitar player listen to it in case I decided to play it during the show."

It turns out she did feel like it. "I was feeling very comfortable on stage. So, I asked them if they'd like to hear a song that I'd never played for anybody. I told them I could change it from Marines to U.S. Army, but then it would be true to the way I wrote it," she recalls. "They told me to go ahead. So I did it. I've never been so moved. For the first time, I just lost it on stage. It was my most passionate moment ever. I started crying. Finally I had to blow my nose, and that broke the moment."