Hank Williams III not only shares his father's and grandfather's name, but he also seems to be a chip off the old block when it comes to blazing his own trail.

Shelton, as the youngest of the Hanks is also known, certainly has his methodology. His songs can be steeped in traditional country as that of his grandfather (for the first time he even covers one of his songs on his new two-CD release, "Straight to Hell"), but he also has been known to go the speed metal root as a bassist with the late Superjoint Ritual and on his own, playing with Assjack and even mixing the two genres within the same performance. 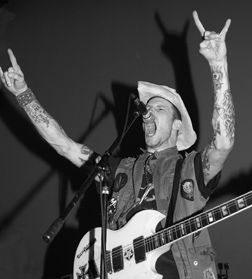 Drinking, smoking weed and the devil are part of the landscape of many Hank III songs, and, matter of fact, his life as well.

And when it comes to lyrics, well there's a reason why "Straight to Hell" is being released in two versions, one clean and one that prudent folks wouldn't care for.

But after 10 years with Curb, the heavily tattooed Hank III only has 3 solo albums to show for his efforts - 1998's "Risin' Outlaw," 2002's "Lovesick Broke & Driftin'" and "Straight to Hell." In 1996, Hank III joined his father and grandfather through the wonders of modern technology to record "Three Hanks: Men With Broken Hearts."

"Argh, I guess it's because we are the black sheep of Nashville for one and BRUC/Curb Records just doesn't believe in us," says Williams via cell phone from Houston explaining the lack of more music.

Unsurprisingly given the past acrimony between Williams, 33, and Curb, the latest diatribes are almost de rigueur.

"They act like I'm going to live for 150 years," says Williams. "They're missing out, man. That's all I can say. I'm doing my job, and they're not doing theirs. At least we got it out there finally, and I already got a whole 'nother record ready for whenever the next time comes."

"If you look at Hank Jr.'s career, in 10 years, he had out over 12 records (Hank Jr. has been on Curb for a good chunk of his career). He's got out 87 records right now. I've been dealing with these guys for over 10 years and put out 3. It just goes to show they're not very good business people. They don't know how to market me...I'm doing my time at the jail. Hopefully, we'll be free here soon, man, and work with someone that actually gives a damn about us."

Curb's Vice of President of Publicity and Media Relations Liz Cavanaugh says, "There were a lot of factors on both sides that delayed the release of the product, but ultimately we feel it was worth it, and ultimately we have a product that everybody is a proud of and ultimately will push Hank III's career to the next level."

On the one hand, Williams seems exasperated with Curb. On the other, he seems to want a more amicable relationship.

"Mainly I was fighting them in court to a) get away from them and then realized that okay I will try one more time. Because they can keep me in court the next 10 years if they wanted to. At least I got 100 percent control of the art though they scratched out 'F--k the CMAs' and 'F-- the Opry' (on the CD jacket)."

William says he acceded to Curb's request for a clean record and the one he really wanted, which contains several songs that Wal-Mart would have doubtlessly refused to stock.

Williams criticized the decision to make changes for Wal-Mart, which he thought would not sell many copies of his music anyway.

"They sell 'South Park,' which messes with racism, homosexuality, politics, religion...'South Park' pushes the envelope way further than we do, and they sell it there."

Cavanaugh says Curb works with "a lot of different vendors. We try to get our music to the largest amount of consumers as possible. We have to work within the guidelines and parameters they set for us sometimes."

Instead of creating a release problem, Williams says, "you should be honored that Wal-Mart doesn't want to carry this record."

"I've always been against censorship...For people in America to be upset over cuss words is the biggest crock of bullshit ever. You need to wake up. Things are getting darker. They ain't going to get no better. Cussing is a way of life, and it's just the way it is man."

Williams did something else unusual in recording the album. He did it on a $500 machine. "That's pretty unheard of on a major label on Music Row," he says.

"We went as do it yourself as much as possible...You don't have to spend $250,000 and then owe your record company the rest of your life to make a record. That was a big stamp that we were trying to make clear on this one."

"None of us went to school for mixing, and we live in bars and get our ears blasted every night. We did a pretty good on turning the knobs and getting some decent sounds."