Dale Watson sums it up best with an old saying, "If you want to make God laugh, make plans." After recovering from a personal tragedy that resulted in a stint at a state mental facility, the Austin-based country traditionalist had planned on drastically scaling back his career, maybe even quitting music altogether.

His children - ages 13 and 7 - had moved with his ex-wife from Texas to Maryland, which proved problematic for the singer-songwriter. 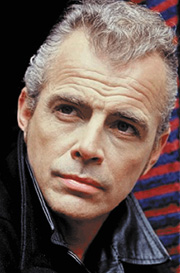 "I wanted to be around my kids more, and the music was getting in the way of that," he explains from his Maryland residence. "I was in a catch-22 situation where I had to work a lot to be able to afford to fly and be around 'em. But then, whenever I took off to be around 'em, I couldn't afford to come back and do it again."

Watson prayed about the problem. Then, just as he resigned himself to taking on a regular day job in the Baltimore area, things began to pop.

"Palo Duro came in and signed for a new record ('Whiskey or God'), the movie 'Austin Angel' came up, and the documentary ('Crazy Again') was done and finished. And, Continental Airlines stepped in. Working with them through the Blue Harbor Association - which helps mental illness awareness - they stepped up and gave me free tickets once a month to see my kids. So, they made it possible for me to still live in Austin, Texas and then fly here once a month and still do my career. So, it's amazing how everything just fell together."

Ironically, Watson's children don't know that their father is one of country music's most highly regarded honky tonkers.

"They know I sing," he laughs, "but I don't know if they know what all I do. Every now and then, they see my face on the TV or in the newspaper. I don't think they really think about it that much."

Known as a staunch defender of traditional country, the Alabama-born Watson turned pro at 15, playing Texas beer joints with his brother Jim in an aggregation called the Classic Country Band.

"My influences were what my father's were," he recalls. "When he played his records - every Sunday morning, we'd wake up to the sound of him playing his lead guitar to the radio or some of the records he had - like ol' Lefty Frizzell and Hank Williams, George Jones - stuff like that."

A prolific songwriter and modern day master of the Bakersfield sound, Watson blanches at the notion that he is merely a retro artist.

"That's been the hardest thing to convey to people about my music. I like to tell them that it's in the vein of Merle Haggard, Buck Owens, Johnny Cash, Bob Wills type stuff. But it's new music. It's just about issues that are pertinent to me and to life today. It's a new house built with an old blueprint."

Many of those influences can be found on Watson's new disc for Palo Duro, "Whiskey or God."

"No Help Wanted" displays the Buck Owens stamp; "I Ain't Been Right, Since I've Been Left" cooks with Doug Kershaw's Cajun beat; the pedal steel intro on "My Heart is Yours" recalls the '70's peak of Gary Stewart.

"Yes, thank you," acknowledges the singer. "I love Gary Stewart's music. He was pretty much king of the honky tonks when I was growing up. My steel guitar player Don Pawlak was influenced by that, no doubt. I told him when he made up that intro lick, I said, 'Man, that's really Gary Stewart's sound. Go with that. Make it more so.'"

Watson also employs the comedic influences of Jerry Reed and Ray Stevens on "Truckin' Queen," which he says is based on a real person.

"I've never seen the guy," he chuckles. "We've only heard him on the radio. Back in 1997, this guy would dominate channel 19 on CB radio in Oklahoma City. That's all you heard when you went through Oklahoma City was this guy saying, 'I've got my nightgown on and pretty red panties on, and I'll be ready to go in a minute.' You couldn't get away from him because he had a power-mic, and it was on a loop. This went on for years. I think the last time I heard it was in 2003. So, he was wanted by the FCC and everybody, and they'd turn off the radio when he went through Oklahoma City. I've never seen him, so with the song I embellished what I thought he looked like."

Most the songs were more or less improvised on stage. A few were written during the most emotionally harrowing point in Watson's life.

"Well, 'Darlin' Look at Me Now,' I wrote that when I was actually in Austin State Hospital," says Watson. "If people don't know, that's the local nuthouse. That's my terminology for that type of place. But it's a great place, and they helped me out a whole lot, so I'm not trying to knock 'em. But I wrote that one while I was there, and that's how I ended up there is over the loss of a girlfriend who died in a car wreck. It took two years of grief to finally put me into there. 'I Wish I Was Crazy Again' talks about when I was in that state. I was thinking that I was able to hear and talk to my girlfriend. So, I was nuts, but I was really happy because I was reunited with her."