We begin our discourse on Tres Chicas with a brief, but important detour to first year Spanish class. As an astute club owner noticed several years ago, Caitlin Cary, Lynn Blakey and Tonya Lamm are indeed three chicks, and when the trio were booked into his club before they had christened their vocal project, he took it upon himself to anoint them, quite simply, Tres Chicas.

But as we know, pronunciation is everything when operating in a foreign language. It can mean the difference between asking where the bathroom is and declaring that locusts have invaded your underpants. To the point: The number three in Spanish is pronounced "trace," while leaving the final consonant sound silent produces a different result altogether. 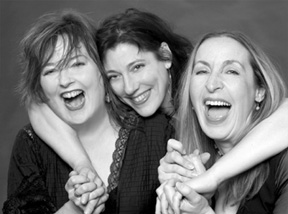 "We get a few 'Tre Chicas' but we're not Super Chicas, we're just three," explains Caitlin Cary from her North Carolina home. "We're not Very Chicas."

Now, while we are sticklers for accuracy, Tre Chicas just might be more appropriate in the final analysis.

One listen to their latest, "Bloom, Red & the Ordinary Girl," (Yep Roc) or a quick visit back to their 2004 debut, "Sweetwater," and one might be tempted to drape them with capes and endorse their membership in the Justice League.

If exquisite roots country vocal harmonies were super powers, Tres Chicas would be kicking some serious supervillian butt with the X-Men of their choice.

As usual, the truth lies somewhere between. Tres Chicas are not superwomen, but they are clearly more than just three chicks, as a simple translation would imply.

The chemistry between Cary, Blakey and Lamm is dense and rich, and when their voices join in harmony, it is the sound one would associate with the Biblical description of a choir of angels. Maybe they're superwomen after all.

It's all part and parcel of the many dichotomies inherent in Tres Chicas' reality. They are three normal women making extraordinary music together, and although the trio recognized the otherworldly qualities of their collaboration early on, they still relegated Tres Chicas to side project status, accommodating recording and performing schedules to the best of all of their abilities, given their hectic alternate lives.

A glance at their resumes reveals why Tres Chicas was shunted to the side for so many years.

Cary's time was consumed with her membership in Whiskeytown in the '90s, and further complicated by her subsequent solo career, her ongoing collaboration with singer/songwriter Thad Cockrell and her voluminous session schedule.

Blakey was and remains a member of the much lauded and in demand Glory Fountain, and Lamm made her bones touring and performing with the equally revered Hazeldine; it was through these associations that the three women originally met.

"Lynn I had known peripherally for years," recalls Cary. "Glory Fountain would play with Whiskeytown on occasion. I was a fan of Glory Fountain without really knowing Lynn very well. Of course, I've worked in bars all these years, so sometimes I would be working when she'd be playing. And I met Tonya when Hazeldine did the No Depression Tour with Whiskeytown. I think it was '96. At that point, Whiskeytown wasn't getting along very well. So, I would ride with them sometimes, and we just became really tight friends."

Not long after, Lamm returned home to North Carolina to care for her ailing mother, and she and Cary began doing coffeehouse gigs as a duo. Almost simultaneously, Cary and Blakey started doing the same thing.

"I was doing separate shows with each of them, and at one point, we all just looked at each other and said, 'Well, this is sort of obvious. We need to do stuff together,'" Cary says. "Famously, that happened in the bathroom, which has been written about all too much; funny translations from Italian magazines that say, 'Tres Chicas was formed on the toilet.' You can make much of it if you like."

After making the decision to work together, the trio attended a performance by longtime friend Alejandro Escovedo. At the post-gig gathering, Cary, Blakey and Lamm sang in public for the first time for their peers, and the results were overwhelmingly positive. Weeks later came their official debut at the Lakeside Lounge where the club's owner gave the as yet unnamed band the moniker that has remained to this day.

Time for Tres Chicas had to be squeezed out of three very tight schedules, and so performances were sporadic, but memorable. By 2000, the trio finally decided to document the impeccable country harmonies they were creating together and approached producer/musician Chris Stamey to record them.

"It was just a couple of days spent around three mics at Chris Stamey's house," says Cary. "We didn't think all that much of it at the time, but then Chris kept pushing us and saying, 'I think we've really got something here. We ought to work on it.' And we'd say, 'Yeah, that's a great idea,' and then somebody would get really busy with something. It was really a couple of years later that we finally went in and did some more work on it and polished it up, and Stamey did a lot of work on his own because he really believed in the record."