Marty Stuart can't be accused of sitting on his duff at this stage of his career, letting his creative juices fall by the wayside and living on past laurels. Nor is he the type of musician to put his finger in the air and follow what may seem commercially viable at the moment.

In fact, Stuart is in the midst of releasing three albums in less than six months, all on his own label through Universal South Records. As if to prove he still has something left in the tank, Stuart also explores different types of music and themes on each album. 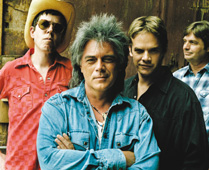 At the end of August, he released "Soul's Chapel," a gospel-based disc recorded with the likes of Mavis Staples aboard and influenced by The Staples.

Looking ahead, Stuart is putting out "Live at the Ryman" in February 2006, a bluegrass album recorded at the Mother Church of country music, a recording not even expected to see the light of day.

"I fell in love with the Lakota people," says Stuart during a question-and-answer session in Nashville, explaining the genesis of "Badlands."

Stuart indicates he knew no bounds in putting the album together, "If I could think it up, I could record it."

"Badlands" looks back on the history of the tribe, including the Battle of Little Big Horn, along with current issues such as casinos on reservations.

Musically, Stuart uses his backing band the Fabulous Superlatives consisting of monster guitarist Kenny Vaughan, veteran drummer Harry Stinson and bassist Brian Glenn. Stuart opts for a country sound, which tends to be acoustic based with Native American influences such as drums.

Stuart has been going to the Badlands region of South Dakota where the Lakota live for about 20 years. Stuart says on his web site that if "Badlands" "has a grandfather," it is Johnny Cash's "Bitter Tears: Ballads of the American Indian," which Cash put out in 1964. The album explored the difficulties Native Americans faced.

And there is a connection between the two albums. While Stuart was once Cash's son in law (Stuart married and eight years later divorced Cindy Cash, Johnny's daughter), the producer of "Badlands" was John Carter Cash, the only child of Johnny and June Carter Cash. Stuart covered one of Johnny Cash's songs, "Big Foot."

"He was probably as close as one could be to being an Indian without actually being a blood Indian," says John Carter Cash of his father in an interview from Nashville where he lives.

Stuart first visited Pine Ridge Reservation as a member of Johnny Cash's band when they played a concert there. The event had a profound effect on his view towards Native Americans and their problems.

Aware of the poverty faced by the Lakota, following the show, Stuart walked out of the bus and was followed by kids. Stuart took out his big red suitcase filled with custom cowboy clothes, ' boots and money, unzipped it and dumped the belongings on the ground for the kids to take.

John Carter Cash says he became involved in the project because "Marty and I have known each other for years and years. Marty got involved with the Lakota Indians and their life and what they were doing through my dad. My father always had a great passion for the Lakota people. Marty learned to love the folks up in South Dakota..."

"My studio is actually right across the street from Marty's house. I did a record called 'The Unbroken Circle - The Musical Heritage of the Carter Family'. (Dualtone) Marty came over for that. It was just a very comfortable atmosphere in the way that we worked together. We had a good time. Marty called me last year and asked me if I'd like to go with him to South Dakota and meet the folks up there and do a sweat (a spiritual cleansing ritual). We went there and Marty asked me to help him with the project and come in as co-producer."

Stuart became so involved with the Lakota tribe that he even has a Lakota name - O Yate' o Chee Ya'ka Hopsila ("The man who helps the people").

"He is adopted into the Lakota tribe...he is now family," says Lakota medicine man Marvin Helper on the "Badlands" disc.

Not only does the album showcase Stuart's musical skills, but also his photography abilities. The inside of the CD jacket is filled with about 35 small photos, mainly of Lakota people, but also some scenery.

"My mom was a shutterbug," says Stuart, explaining how he first got a yen for photography. "She shot from the heart. She knew when to hit the button...I was just carrying a (camera) and notepad with me everywhere I went."