Life begins at "40" for Larry Sparks

Subtract his birth year of 1947 from 2005, and the math says 58, but it's still winter as Larry Sparks talks from his long-time home in Indiana, and with his September birthday still months away, he laughs and says, "Fifty-seven...don't push it."

To those who remember him as a teenaged guitar picker for the Stanley Brothers in the mid-1960s, it will probably come as a shock - and make a few more joints ache just a little more - to realize that Larry Sparks is now a certified 40-year veteran of the bluegrass business.

To mark the occasion, his longtime label, Virginia-based Rebel Records brought him into the studio for a collection of 16 songs, some new and some revisits of 4 decades worth of Sparks classics. 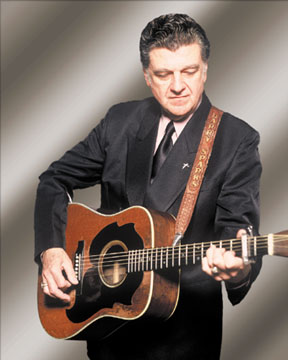 Titled, appropriately enough, "40," he's joined by a stellar cast of folks, many of whom he's performed and recorded with over the years, and some who are simply among his biggest fans - Alison Krauss, Vince Gill, Rhonda Vincent, Tom T. Hall and Rebecca Lynn Howard, to drop a few names.

Though born in Ohio, his family had moved to Indiana by the time he was in high school, when he was already singing and playing with his sister, Bernice. As with so many well-rounded and accomplished musical talents, his own distinctive style grew out of a synthesis of a myriad of different influences and inspirations:"There was a lot of people I listened to. I didn't follow any one person. If I start naming people, I'll leave out one I wanted to name, but you've got your older country singers, like Roy Acuff, Hank Williams, Ernest Tubb, Lefty Frizzell and Hank Locklin, and all these people are just 'singer's singers' to me, and I grew up listening to all these people. The bluegrass part, there was Monroe, Flatt and Scruggs, (the) Stanley (Brothers) and Reno and Smiley, those were the biggest ones and about the only ones."

As his career as an independent artist and bandleader grew and flourished, Sparks came to be known for a style, both vocally and instrumentally, that was heavily infused with country blues and gospel strains, and though his individualism was always a strong element of his appeal, he always understood that the roots would sometimes show through.

"I think a little bit of them is going to come out of me at times, as I think it does all of us - you'll get real good sounds, you'll draw something from all of them. It's embedded in me so strong that sometimes, a little bit of somebody is gonna come out, but I don't mind it at all. I don't let it take control of what I do, you know, to try to sound like someone. I realized several years ago (that) I'm not going to be somebody else. I have to do something different. And, I think I have."

Sparks' emergence as a top bluegrass talent is a story embedded in the lore of the music. In the wake of his brother Carter's passing in December, 1966, Ralph Stanley was unsure if he could - or even wanted to - continue in the business, but was convinced by an outpouring of fan support to keep going.

Faced with the difficult task of finding and hiring a lead singer who could step into the huge gap left by Carter and not crumble under the weight of the fans' expectations, Ralph was expected by many to hire Roy Lee Centers, a powerful singer with a sound and style uncannily similar to Carter's.

As Ralph would admit in later years, Larry Sparks didn't figure into his thinking at the time, for the simple reason that Sparks had been hired as a guitarist for his stints with the Stanleys, and Ralph had no idea he could sing.On an evening in early 1967 that would become bluegrass legend, Sparks approached Stanley at a club in Dayton, Ohio where he was appearing and pitched himself as the new lead singer for the Clinch Mountain Boys. It didn't take long, Sparks recalls, to seal the deal.

"He took about four minutes, however long it takes to do two songs...and he was very convinced I could do the job. I was just honored to have it, and looking back now...I'm glad that he gave me the chance to sing with him, and sometimes you don't realize how lucky you are until the years go by, and you understand more."

Sparks recalls, of course, the two songs he did for his audition and can't help noting, ironically, the "house band" that backed him up.

"I sang 'Stone Walls and Steel Bars,' and I sang 'I Wonder How The Old Folks Are At Home,' that's an old song, and those were the two I sang with the house band, which...was Roy Lee Centers, but he (Stanley) had different musicians with him, you know. Ralph was there that night to do a show, just him, and Curly Ray Cline and Melvin Goins, just the three of them."

Sparks spent a couple of ' years with Stanley before forming the Lonesome Ramblers - still his "brand name" - and striking out on his own. The sad footnote to this, of course, is that Centers finally got the Stanley job as Sparks' replacement, contributing to some of the best of the Stanley catalog before being tragically shot to death in a domestic incident in 1972.