The recent cold snap in hell is nothing like the full freeze that took place there when The Eagles decided to bury the hatchet and regrouped to play together again. And yet it still seemed like an unseasonably cool forecast for the underworld when it was announced that Jay Farrar would be reuniting with his band mates in Son Volt, the much revered Americana/roots band he had dismantled for a solo career seven years ago. 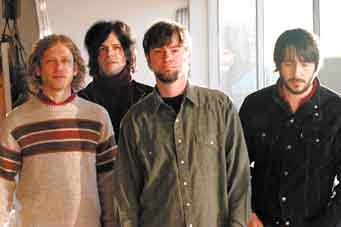 To be fair, the initial word of Son Volt's return might not have set off hell's Doppler because it didn't seem to qualify as a full scale reunion.

The original plan was for the long-distant members of Son Volt to reconvene last spring in order to record a cover of Alejandro Escovedo's "Sometimes" for the "Por Vida" tribute album, organized as a benefit to help defray Escovedo's mounting medical bills in the wake of his Hepatitis C diagnosis two years ago.

"We got along well, and the song turned out fine," says Farrar from his St. Louis studio. "It was great to do it for a friend."

But once the Escovedo session was wrapped, Farrar couldn't help but notice that the band had crackled with the intensity of the old days, and he began to consider the possibility of actually reviving Son Volt to play the new songs he'd been writing for what eventually became the new Son Volt album, "Okemah and the Melody of Riot," out in mid-July on Sony Legacy.

Farrar's most recent output had seemed to him to be better suited to an electric presentation, a far cry from the acoustic atmosphere he had constructed on his post-Son Volt solo work (2001's "Sebastopol" and 2003's "Terroir Blues" and to a lesser extent the "Thirdshiftgrottoslack" EP and the live "Stone Steel and Bright Lights").

His latest solo work had found him working in a band setting once again, with his opening act Canyon serving as his backing band during his sets. In the back of his mind, he saw the reunification of Son Volt as the best way to present his new songs.

"I knew I wanted to get back to the band situation, and that meant Son Volt," says Farrar.

"Most of the songs were written over a six to eight month period before we went in and recorded them. A couple of the songs were a little older. 'Medication' originally was kind of a straightforward rock song, and 'Endless War' was from the 'Terroir Blues' period where I was separating the uptempo stuff from the down stuff."

Given Farrar's long association with bands that seemed to end badly - first the legendary Uncle Tupelo with Jeff Tweedy, then the widely praised Son Volt - his seven-year stretch in solo acoustic territory seemed to be a direction he would be following for awhile.

But, as Farrar is quick to note, he never really broke up Son Volt officially, and he'd always utilized an acoustic guitar in every band he'd been in, so he wasn't the least bit surprised when the idea of reforming his last band cropped up.

"Certainly the acoustic guitar lends itself well to a solo situation, and I'm glad I did that for four or five years," says Farrar. "I felt that it was a challenge that I wanted to take on, and I'm glad that I did that. I'd grown up playing music in a band context and doing the solo acoustic thing I think allowed me to grow into what I do the proper way."

According to Farrar, the rest of the band seemed anxious to get back together and rekindle the old spark, especially after the success of the two-day session that yielded Escovedo's "Sometimes."

But on the eve of realizing the band's plan to hit the studio and record once again as Son Volt, the whole thing dissolved.

Although reports have been sketchy, and Farrar himself is reticent to get too deep into the details of the situation, it is known that the other three original Son Volt members - multi-instrumentalist Dave Boquist, bassist Jim Boquist and drummer Mike Heidorn - retained a lawyer and agreed in principle to the reunion, which was then announced.

On the day they were all to begin work on the new album last September, Farrar was apparently blindsided by new demands made through the band's lawyer.

"It came right down to the wire, and the actual first day of preproduction is when it fell apart," says Farrar. "It was something that I really wanted to see happen, and it felt like I tried for months to make it happen. Everyone agreed to it. Everyone showed up. The thing that was disheartening was that there was no willingness on their part to come by and work through it. I was at the studio, ready to go and telling them, 'Come on, let's just play music and work through this, we'll figure something out.' But they chose to not show up. "

When asked what exactly brought the whole episode to an end, Farrar remains vague.

"It's too convoluted to go into, but you can imagine there are always some sticking points," he says. "From my perspective, it's nothing that could not have been worked out. The thing that was once again disheartening is that they didn't bring these points up months ago. They waited until after it was announced that the reunion was happening and then waited until the first day of being in the studio to bring it up. It was unfortunate, but we moved on."