Michelle Shocked is a busy lady. She doesn't have one or even two new CDs to promote these days. Nope. She has - count 'em - three fresh discs to get behind in June!

One is called "Don't Ask Don't Tell," which mostly adheres to her folk roots. "Got No Strings" is a Western swing tribute to a few of her favorite Disney songs. The last in the trio is "Mexican Standoff," and this one is part Spanish language, part blues. So why put out so much new music on her own label at once?

"In this case, I did it because I could," Shocked explains. "I could have taken three or even five years to release all this material. But instead I got it all out of my system at one time." 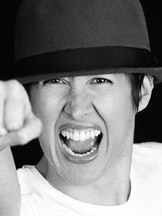 One imagines it must have taken a lot of studio hours to get all of these songs - 31 in total - laid down. But that'd be a wrong assumption. "Two months," Shocked states, amazingly. "We started at the beginning of December, and we were done by the end of January."If you're thinking that Shocked amassed all of these tracks and then neatly divided them into the respective albums where they belonged, you'd be wrong once again."I preconceived them separately," she explains. "I am, if nothing else, a conceptualist. So the idea would have been what motivated me to follow through on the various challenges that are represented by seeing three albums to completion.""Got No Strings" will likely hold the most appeal for country music fans, since it takes tunes associated with Disney's various films and puts them into a Bob Wills-like context.

Nevertheless, this disc is not Shocked's personal favorite of the trio."My favorite is 'Don't Ask Don't Tell' because it pays good on some of the promises that I made as a young songwriter," Shocked says.The "Mexican Standoff" third of this collection reveals much about Shocked's unique work ethic. "I don't tend to write just one song," she elaborates. "If I get an idea, I will come at it from several angles. And the idea for the first half of that album came from this concept of how I say, 'You know more Spanish than you think you do.' And then I would start to look for examples where I understood a Spanish phrase, but I didn't know when or how I had learned it.""Mexican Standoff," in spite of the south of the border name, is as much blues as it is Spanish language music."Because I come from Texas, I also have a strong body of work that is just permeated by blues influences - particularly Jimmy Reed, who I didn't grow up listening to. But I now realize that so many of the musicians that I did grow up listening to and enjoy, had also experienced the fact the Jimmy Reed had permeated so much of Texas blues."

Like most folks of her generation, it was difficult not to be exposed to Disney music growing up. Nevertheless, her idea for making the "Got No Strings" part of the trilogy came from an entirely unique inspiration."The real genesis was a longstanding desire to work with Nick Forster of Hot Rize fame," she says. "I adore Nick as a person, as a musician, as a producer. And so he and I first began to collaborate on, 'Let's do an album together.' One of which we talked about was writing an original Western swing musical, a musical that drew upon Western swing concepts."

Although this Western swing musical never came to fruition, her Disney songs set is now one of the swinging-est musical places on earth.The whole Disney connection actually entered the picture when Shocked's new artist friend and beau - whom the singer only refers to as "my sweetheart" - began incorporating Disney images into his art.

"He is currently painting a series of paintings that feature Mickey and Donald. And I wanted to create an album that would, perhaps, allow me to...for example, when I play in New York, he's going to be up on stage painting some of these characters while I'm singing. And if it weren't for that influence, I don't think I ever would have approached making an album covering songs from Disney."Even though this disc is made up of Disney songs, which were, of course, taken from children's movies, it's by no means a children's album. This point is made clear from the get-go, with "To Be a Cat," which features a particularly sultry Shocked vocal.

You see, when Shocked recorded these songs, she was also going through a particularly difficult stretch of her life, and it would have been nearly impossible to make a lighthearted collection of songs in the midst of all of that.

"I went into it with an agenda where I didn't want it to be just children's songs," Shocked explains. "I didn't want it to be just Western swing songs. I also wanted it to be part of this overall concept of coming to terms with the end of a failed marriage."From the choices of the songs, to the titles of the discs, Shocked's heart state at the time is written all over them."I had a choice with the title of the album, between 'Baby Mine' and 'Got No Strings,' and you see the choice I made. Just because it helps me kind of push that concept one step further. My marriage of 13 years just ended about 2 years ago, and I've not made an album since then. So this trilogy really ends up being the chronicle of that. It's actually a lot of relief. I'm reconciled. And I'm obviously moved on to better, better things."