When reached by phone, Billy Joe Shaver was at a church someplace near his Waco, Texas home. And church is not an uncommon place to find Mr. Shaver these days because he's an outspokenly spiritual man. In fact, the singer/songwriter's new "The Real Deal" CD (his first release in three years) contains a few overt nods to his Christian faith, namely the tracks "Jesus Christ Is Still the King" and "Live Forever."

"You know what. That stuff leaks in there in about every song I've got," says Shaver of this unique relationship between his faith and his music. "It's always been in there. I didn't mean for it to be. I ain't no one that's gotta shove stuff down your throat or anything like that. There ain't nothin' wrong with being a Christian. It can't hurt ya. I don't preach; I just write my songs and go on. Take it or leave it, it's part of the deal. It's just an everyday thing with me. Atheists and people like that, they get all uptight about it. But why? I mean, they got a right to be the way they are. And we got a right to be the way we are." 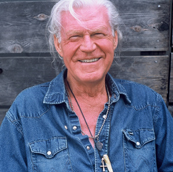 "I'm at the Church of the Open Door," says Shaver of this Wednesday night church outing. "It's kind of a non-denominational thing. It's the first time I've ever been here, really. But I've got my Bible! I'll hit 'em in the head with my Bible," he kids.

Shaver has always been a giving person - even before his conversion to Christianity.

"Children of God, you got to share it," he advises. "I used to get some good dope, you know. And, man, I wouldn't smoke and take it down myself or snort it or anything by myself. I'd go find me a friend and say, 'Man, I've got some good shit here! Let's do it.' It works the same way with Jesus Christ. That's the way it is. It's part of the deal. You've gotta share it."

Nevertheless, this respected artist is by no means a one-dimensional kind of performer, and his wide lyrical range is exemplified by a particularly hilarious new song titled "Slim Chance and the Can't Hardly Playboys," which tells the hard luck story about a band that's not quite ready for prime time - or any public time, really, for that matter.

To honor the breadth of Shaver's material over the years, he was just recently the beneficiary of a tribute CD where such likeminded performers as Guy Clark, Joe Ely, Jimmie Dale Gilmore, Dale Watson, Robert Earl Keen, Bruce Robison, Kelly Willis, Jack Ingram, Todd Snider and Cory Morrow all took cracks at some of his better-known songs. The album is called, "A Tribute To Billy Joe Shaver: Live."

"Yeah, it was great," Shaver comments. "It was fun. There was a lot of people that just couldn't be there because they was playin'. But the ones that came were just great. Jimmie Dale Gilmore sang that "Hearts-A-Bustin,' and I had to go to my truck because I was just cryin'."

Shaver is an unabashed fan of Gilmore's. "He sounds just like an old radio," Shaver says. Shaver's new disc on Compadré, similarly, has no shortage in the star power department. Big & Rich appear on "Live Forever," Kevin Fowler helps Shaver sing "Slim Chance and the Can't Hardly Playboys," and Nanci Griffith, Kimmie Rhodes, and Flaco Jimenez each make guest appearances. Shaver was also in good company when he recently appeared along with Toby Keith, Merle Haggard, David Allan Coe and Shelby Lynne as part of CMT's "Outlaws" concert special. With Waylon and Johnny since passed on, Shaver is one of the few surviving original outlaws. So, his very presence at this event was truly something special.

"I was having a rough time with that," Shaver says of this television taping. "I couldn't hear the beat. I hope I did good. But think it's wonderful because Toby's a real outlaw. I think of outlaws as somebody that just says what they feel in their heart. It's actually art because no one controls 'em. No one tells 'em how to do it. They just do it their way, and by God, that's the way you're gonna get it. If you like it, fine. If you don't, fine. That's what I call being an outlaw. I think Toby's one of the best in the world. I just love him. I just met him, too. Him and Merle and all the guys sang happy birthday to me. It was on my birthday on the day we did that, Aug. 16."

He's not sure he'd refer to himself as a true outlaw, however.

"When it first started happening, it was more like outcast," jokes Shaver. "The system had these big old cogs that worked for 'em pretty good. They didn't know that they were draggin' down. But then we came in, me and Kris and Willie and a bunch of us...and Merle Haggard. I think Merle Haggard started all that outlaw stuff myself, way back in the 60s. He's the real deal. I just love Merle Haggard." For those that need to get caught up on this unique artist's life, his autobiography ("Honky Tonk Hero") has just been published, as well as a biographical DVD titled "Portrait of Billy Joe."