For Keith Sewell, making music is a journey

Once he finished with high school, Keith Sewell didn't take long to find a career in music. "I went to college for a semester," the Texas-born singer-songwriter-guitarist recalls, "and in the middle of that semester I met these guys in Dallas called The Shop. They were kind of a Texas country show band. They played summers, mostly, and they opened up for a lot of artists. I thought that would be a cool thing to get into, and so I went on the road with them in February of 1990, playing guitar, banjo and fiddle."

That might have been little more than a youthful adventure for Sewell, who had grown up playing in bluegrass bands around Dallas, but for one thing. 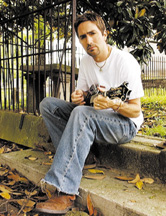 "I remember that when they gave us the itinerary for the band, it would usually say in parentheses who we were opening for - and I saw that on July 21st we were opening for Ricky Skaggs in Enumclaw, Wash. I put a big old circle around that date because Skaggs was one of my big heroes."

"The day of the show, when the buses all pulled in, I realized that I had known some of his band guys, like Billy Joe Foster. He was from Texas, and we kind of remembered each other. So we started talking and hanging out, and then when Ricky came in, they let me sit on the side of the stage. But I hadn't met Ricky yet. So I watched the show from the wings, and it was a great show. And then, right before we left that night, the guitar player asked me for my card."

"Two weeks later, he called me and said, 'you know, Ricky's wanting to get hold of you because Billy Joe'- he was the utility guy, he played all the instruments - 'is leaving the band.' And so Ricky called me at home, in Dallas. And I was just overwhelmed. He said, 'I want to fly you up here for the next couple of days and have you audition because I need a utility guy who can sing. I thought, 'man, there's got to be hundreds of guys in Nashville you could hire, why in the world are you messing with me?' But he told me straight up, 'I want somebody who's young, who doesn't know everything, who I can kind of take under my wing, and teach him to play.' So he flew me up there, I auditioned, and he offered me a job. Two weeks later, I moved to Nashville, and I worked for Ricky for almost seven years. It was a really great experience. And even when I left, I kind of had the feeling that I'd work with him again somewhere."

It took a while - another seven years, more or less - but Sewell's premonition turned out to be right on the money when he signed with Skaggs Family Records, and the label released "Love Is A Journey," a self-produced collection of original songs that combine bluegrass finesse and drive with contemporary country themes and sophistication, at the end of this past summer.

But though it's technically his debut, it's not the first album that Sewell recorded - and, he's quick to point out, the earlier experience dramatically shaped his approach to recording and to his career.

"I left Ricky's band when I got signed to Universal," he explains. "I made my album - Emory Gordy Jr. produced it - but it was a time when Nashville was going through a kind of transition, and it seemed like it wasn't so much about music. They weren't really making records anymore, they were making singles. I felt like we had made an awesome record - an album - but they were looking at it from the singles standpoint, and they didn't hear any singles that they felt were viable for the market. So we ended up in this kind of gridlock for a while, and then one day, the label just shut down the division out of the blue. I got caught up in that, and I was kind of in limbo for a couple of years - I just had to hang out."

"That whole process just took the air out of me. But I still had a publishing deal, and so I spent a lot of time writing songs and ended up getting some cuts. But something in me wanted to get back to loving music again because I had gotten caught up in the politics of it, and man, that was not fun. And so I decided to go out and play some more. People would call me to play on their demos, and I was playing on my own demos, too. And then I started playing out with Sonya Isaacs a little bit - I'd been writing songs with her, and she cut a couple of them - and then with Leslie Satcher a little bit, here and there. Then I did a writer's night with Vince (Gill) and Amy (Grant), and that was fun, too.

"Little things just started pushing me toward the playing part of it again, and I realized how much I missed it. So I started going out and playing with bands, playing some bluegrass again, and things started happening."

What that modest "things started happening" conceals is the level at which Sewell began to work, including his participation in the Dixie Chicks' Top Of The World tour.

"They had gone off and cut a bluegrass record ("Home")," he says with a laugh. "Bryan Sutton recorded the guitar parts on the record, but he couldn't do the shows, so he called me up to see if I was interested - and then he told them to call me, they gave me a shout, and I ended up getting hired to do the tour. That was fun, and then when I got done with that, I went on the road with Jerry Douglas."