Getting down on the farm with Jason Ringenberg, er, Farmer Jason

Jason Ringenberg has transformed himself into Farmer Jason for his new "A Day At The Farm With Farmer Jason" album. On the CD cover, he's illustrated as an animated figure racing out of the barn atop a souped-up John Deere tractor. The package also includes a warning sticker that reads, "Parental Advisory: This CD contains songs that will have you singing along with your kids."

That's right, moms and dads and boys and girls, "A Day At The Farm With Farmer Jason" is Ringenberg's farm-centered first children's album. 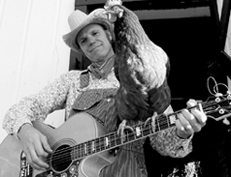 Speaking on the night before Thanksgiving via phone while out and about running errands, Ringenberg says, "We won't be eating turkey, that's for sure. We'll be having tofu turkey because we're organic vegetarians."

This farmer - albeit a self-described hobbyist farmer - is certainly not a carnivorous farmer. And maybe that's why there's so much love in his voice when he's singing about chickens ("A Guitar Pickin' Chicken"), horses ("Whoa There Pony!"), cows ("I'm Just An Old Cow"), pigs ("He's A Hog Hog Hog") dogs ("The Doggie Dance"), cats ("Little Kitty") and sheep ("Hey Little Lamb").

Ringenberg can concentrate on fun projects, like this children's album, because his beloved Jason & the Scorchers cow punk band has pretty much called it a day again.

"There really isn't much left of the band," Ringenberg admits sadly. "Jeff (Johnson) left several years ago, and we replaced him. But then Perry (Baggs) left two years ago, and that really put a damper on the band because replacing Perry would be really hard to do. We do a few shows now and again, but nothing serious."But with three solo albums under his belt - or are they tucked under his overalls? - Ringenberg is now firmly established as a solo artist.

Farmer Jason looks and sounds like an agricultural natural dressed in his barnyard duds. Not surprisingly, this outside-the-city-limits album came together fairly spontaneously. When he first conceived it, he had his three daughters - Helsey Beth, Camille Grace and Addie Rose - in mind.

"It just seemed like a really cool thing to do; that they could have an album to listen to while I'm out on the road and stuff. Originally, it was just going to be kind of a fun thing, something I was going to do, just for sort of a whim. But it's grown into much more than that, actually. It seems to be really taking off. There was no laboring on this record. The stuff just poured out. It was so easy and so much fun to write. I had an absolute riot writing these songs. It was totally fun. And I think you can kind of hear it on the tracks."

"A Day At The Farm" reminds one of a more innocent time in music and culture. It contrasts markedly with, say, the recent remake of "A Cat In The Hat," which is said to contain a lot of sexual innuendo in it for the soul purpose of keeping the attention of adult film goers.

But Ringenberg's new project is just good, straightforward fun music, which is refreshing.

"I did want Farmer Jason to hearken back to a different kind of time for children," Ringenberg explains. "I wanted him to sort of feel like the wonderful upbringing I had on the farm. I kind of wanted to bring some of that across with Farmer Jason. Hopefully, listeners will get some of that feeling of rural life. With the farm animals and life on the farm, it's an absolutely wonderful way to grow up. It's definitely a dying thing, since very few people live a rural life anymore."

Nevertheless, Ringenberg wanted moms and dads to get something out of it.

"I definitely wanted to make a record that adults could also find some value in as well," Ringenberg notes. "That was important to me. I've always felt like kids like good music. My kids, for example, love Abba. I've had all kinds of folks say that they've had kids that love Jason & the Scorchers. So I really wanted to make a record that had really good energy and a lot of really good hooks. I didn't want to dumb it down, you know? Obviously, the subject matter's going to be a little bit different - even for adults. But I really wanted to have good energy and good playing. I really wanted to have good musicianship on the record, with good arrangements and good production."

Adults who know their country music history will immediately warm up to the track, "I'm Just An Old Cow," since its guitar riff is borrowed straight from Johnny Cash's "I Walk The Line," and its low and cow-y lead vocal is a friendly nod to the recently deceased Man In Black.

"I think anybody who's ever played the kind of music that I play, would have to be a fan of Johnny Cash," Ringenberg readily admits. "I really wanted it (the track) to be low," Ringenberg explains. "And whenever you set your voice low, you're gonna take on Cash inflections."

This album, as its title succinctly summarizes, follows Farmer Jason throughout a typical day at the farm. Along his way, he sings and talks about the plants, equipment and animals he sees there.