Singer/mandolinist John Skehan sounds vaguely amused while explaining the significance behind the title of Railroad Earth's new double live disc for Sci Fidelity. "A couple of people have asked, 'What the hell is an Elko?" What the hell does that mean?' They're not familiar with the song or the town or anything."

"The title track 'Elko' sprang out of a little border town in Nevada that was usually our stopping point on the way back from or on the way to California," Skehan continues. "It usually fell on a night off - a drive day, where you end up in little casino towns where the rooms are very cheap and the bars are open all night long. So, you have a bunch of road weary musicians pulling in and parking for the night and given full shore leave and liberty in a casino." 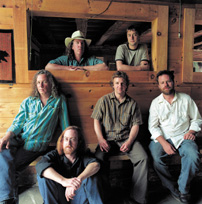 Cris-crossing the country almost ceaselessly since forming in 2001, the sextet has parlayed their unique blend of bluegrass, Celtic folk, jazz and world music with undertones of rock, into a hard-won reputation as one of the most innovative and freewheeling jam bands working today. As such, they attract an especially distinctive and devoted audience.

"We see a lot of what you would call 'Grateful' moms and dads," reports Skehan from his New Jersey home. "Deadheads who have been at it for a while and are maybe getting up there a little, bit but are still very active and involved in a lot of music, up to octogenarians. We've kind of gotten a little bit of everybody."

The various members honed their chops in several different musical aggregations prior to Railroad Earth.

Railroad Earth came together as something of a happy accident.

"We weren't really planning on a particular sound," recalls Skehan. "The four of us - myself, Timmy, Todd and Andy - began to get together in an acoustic format, just working on some new songs that Todd had been writing. The music just seemed to lend itself to the bluegrass complement of banjo, fiddle, mandolin and acoustic guitar. Shortly afterwards, we found ourselves a bass player and then Carey Harman - who's a very sensitive drummer - was the only person around who could sing tenor to Todd. We were just focused on the songs and something new that we weren't quite able to put our fingers on."

"By the time we hit the road and began touring, we brought in (engineer) Mike Partridge, who was tremendously helpful in helping us keep something of an acoustic sound, but bring things up to the level and fullness of a rock band. We're all plugged in. We're all amplified. We have drums. But we're trying to keep the instruments somewhat clear and pure sounding while being able to fill a large room and have some impact as opposed to just playing at the microphones or doing a real traditional style presentation."

Although they have never billed themselves as a pure bluegrass ensemble, Railroad Earth appeared at some hardcore roots venues early on.

"We found ourselves playing at a few traditional bluegrass festivals, where, as soon as they saw the amplifier and the drums roll out, you could hear the lawn chairs snapping shut," Skehan reminisces. "But I feel that those who have been willing to give it a try haven't been disappointed."

Everyone in the band can read music and take a special delight in improvising and working off the moment. Toward that end, Goesling's instrumental prowess has proven remarkably handy.

"Andy plays banjo, Dobro, guitar - a couple of different guitar styles in different tunings," Skehan crows. "So, he usually has two or three guitars tuned up in different crazy ways. He plays a wonderful mandolin as well. He plays flute and pennywhistle; he plays all woodwind instruments, and he occasionally plays clarinet and saxophone - sometimes two saxophones at once in the style of Roland Kirk, which is pretty impressive. So, he can be a one-man horn section or he can be any string player that you might need. His most recent addition was the mountain dulcimer."

The band's creative soul is expressed through Schaeffer's spiritually intense songs, which seem to be channeled as much as they are written. Skehan offers an example of this peculiar method from the group's last studio album, "The Good Life."

"There's a track on there called 'Mourning Flies,' that really came about as really a morning warm-up. As everybody sort of filtered in and picked up their instruments, this soundscape began to evolve. Next thing you know, Todd began singing. He has a really remarkable ability to start to sing something that has a definite, evolving melody, and he'll mouth syllables that make you think he's actually singing something. He'll pause for a moment. Jot a few things down. Unwittingly, we'll say, 'Hey, that sounds really good. What are you singing there?' 'I don't know yet.' Somehow he's able to do it very spontaneously. In the case of 'Mourning Flies,' by the next day, I think there was a song."Railroad Earth received the ultimate vote of confidence from one of their musical heroes, Grateful Dead bass-player Phil Lesh. "Our first encounter with Phil was when we were playing out in San Francisco," remembers Skehan. "He came backstage after the first set and was very complimentary to me. I could've walked away happy at that point. I think it was the following Monday that Timmy and I each got a phone call from him, asking us to join him at a special three-night run of shows at the Warfield in December. To me, the most interesting part of that experience was seeing what Phil had put together. As he described it, it was a 'drama in three parts.' Three sets - a tremendous range of material, but all very carefully put together and arranged by Phil for this large ensemble to tell a story over three nights, through probably 60 different songs."