John Prine does it "Fair & Square"

It doesn't seem possible that nearly a decade has passed since singer/songwriter John Prine last released a full album of his own original work, which fans will tell you consistently runs the gamut from piercingly poignant to goofier than Mickey Mouse's best friend.

After all, this is the notoriously prolific John Prine, who once put together a string of seven albums in nine years, six of them in consecutive years.

And yet here we are, almost 10 years after Prine's brilliant "Lost Dogs & Mixed Blessings" in 1995, and 5 years after he wrote a lone original track to serve as the title for "In Spite of Ourselves," his covers-and-duets collection from 1999. 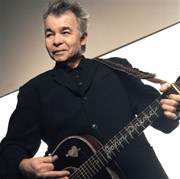 After struggling for close to five years with the songwriting muse that once seemed almost effortless, Prine finally assembled what may stand as some of the finest work of his career for the creakily wonderful "Fair & Square."

The thing that truly distinguishes "Fair & Square" from the rest of Prine's exemplary catalog is how close it came to never happening, not because of writer's block or a stagnant music business or any petty external causes.

Had Prine chosen to ignore a growth on his neck, we may have gathered here on the 10th anniversary of "Lost Dogs & Mixed Blessings" to celebrate the very last John Prine album ever.

A cancer diagnosis presents a particularly pointed opportunity for self-assessment and reflection, a time to ponder one's accomplishments and failures and to put them in the perspective of one's potentially diminishing timeline.

In 1998, Prine was offered that unwelcome and non-negotiable opportunity when a lump on his neck that had initially been diagnosed as benign turned out to be anything but.

He had just started the sessions that ultimately became "In Spite of Ourselves," a spirited album of covers done as duets with a veritable who's who of female country/folk talent (including Emmylou Harris, Patty Loveless, Iris DeMent, Trisha Yearwood and Lucinda Williams), but he had no choice other than to abandon the album for the time being and concentrate on his health.

After locating doctors in Houston through former producer Knox Phillips (son of Sun Record founder Sam Phillips), who had been treated there successfully for a similar cancer, Prine submitted himself to surgery and the subsequent regimen of chemotherapy.

Thankfully, all of the procedures proved to be just as successful for Prine, who has been cancer-free for the past seven years.

He resumed work on "In Spite of Ourselves," released to glowing reviews, and he then rerecorded a handful of his own favorites to reclaim the master recording rights for 2000's "Souvenirs."

But an odd thing had happened as a result of either the surgery or the chemo treatments. Prine's voice dropped about an octave, forcing him to drop the tunings on his songs, the first time in his 30-plus year career that he had made such an adjustment.

After enduring the soul-searching that inevitably accompanies the cancer experience, Prine found it necessary to assess his musical identity from the ' most basic mechanical standpoint. As it happened, Prine came to some important realizations concerning his legacy, particularly the songs that dated from the earliest parts of his career.

"I sure am glad those songs were as good as they are," says Prine from his longtime Nashville home. "Just changing the key made those songs brand new for me. The first time I went in front of an audience that way, I was like, 'Wow, who wrote this?' I'm thankful that kid knew how to write so good."

Did he ever. Prine's eponymous debut album in 1971 was filled to bursting with songs that were destined to become classics, not only within his own repertoire, but as a part of pop culture ("Some of them have turned into campfire songs," says a bemused Prine of his early catalog).

The deceptively lullaby refrain of "Sam Stone" ("There's a hole in Daddy's arm where all the money goes..."), the wistful remembrance of "Paradise," the smirking nudge of "Illegal Smile," the exquisite longing of "Angel From Montgomery" and the plaintive certainty of "Hello in There" all combined to inspire Kris Kristofferson to comment in his liner notes for the album that hearing Prine for the first time was akin to "stumbling upon Dylan when he first busted upon the Village scene."

The media took it one step further and anointed Prine "the next Bob Dylan," eliciting his famously self-effacing response when asked how he viewed that sentiment: "I don't think we're done with the last one."

It was heady praise for a former mailman who had taken to hanging around Chicago's Old Town School of Folk Music with friend Steve Goodman and plying the city's coffeehouse circuit with his homespun humor, folksy charm and set after set of wickedly insightful songs.

After Goodman convinced Kristofferson and schlockmeister Paul Anka into catching Prine's after hours set at a Chicago club in 1970, things happened fast.