Pinmonkey's third release, and first for its new label Back Porch Records, is titled "Big Shiny Cars." If you polled diehard Pinmonkey fans, who are sometimes referred to as Pinmonkey Junkies, it's about darn time this traditional Americana group released a sparkling new musical vehicle, so to speak.

Its previous album, which came out on BNA and was self-titled, has logged quite a few highway miles since it initially hit the road in 2002. 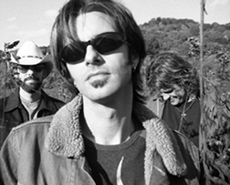 This 'major to indie' label transition is a little bit like going from a big luxury car to a tiny economy car.

"There are a lot of artists that go through that whole major label deal thing, and when they lose the deal they come out the other side rather bitter," notes Pinmonkey vocalist Michael Reynolds.

"We look at it like it was a great thing for us. I was telling someone the other day that the major label deal came along at the right time, (and) it went away at the right time. It really gave us a good introduction into the country music world."

"But then we were able to step away and go back to a lot more artistically free environment. In fact, when we recorded this album, we recorded it before we had even talked about Back Porch Records."

"We just went in and recorded an album for ourselves. We're just like, 'Let's just go in and do music that we love. Let's just pick the songs that we would love to do and play every night - without any thought about what's going to get on radio or what's not. What's commercially viable - all of that stuff was just not even taken into consideration. We just did the music that we wanted to do."

Pinmonkey got a healthy taste of the country mainstream environment along with its BNA album release, which also landed it a few high profile tours with artists like Alan Jackson and Lee Ann Womack.

"We remain very grateful for what BNA did for us and the money that they spent on us." Reynolds states. "It was a good experience for us; it was a good learning experience."

But if a band is as good as Pinmonkey is, why on earth did the label ever let it go in the first place?

"I don't think there ever really is an explanation," Reynolds wonders aloud. "Even when we got offered the deal, we didn't take it right away. We all kind of got together and sat down and discussed the pros and cons of going through a major label. And we talked about the fact that going with a major label was kind of like playing the lottery: Some people win, most people don't."

"We went into it knowing that this might not work for us. There's a good chance that this won't work for us because it doesn't work for a majority of people who do it. But we decided it was worth the gamble, which I think made it easier for us coming off the backend, knowing that we didn't hit the big prize. But we did walk away with a good experience under our belt."

Oddly enough, Pinmonkey was dropped even though it had a degree of commercial success with BNA thanks, in part, to airplay with "Barbed Wire And Roses."

"Particularly by indie standards, it was a great success," Reynolds recalls. "Not really a success by major label standards. This gave us a great setup for our deal with Back Porch because they're very excited about working with us because of what we've proven through the BNA album."

Back Porch Records - which sports an eclectic lineup of artists ranging from the New Orleans R&B of the Neville Brothers to Frank Black's twisted alternative rock - might just be the best label fit for Pinmonkey's unadorned Americana music.

Nevertheless, this band wasn't about to give up on the major label life quite yet.

"After we got done recording this album and we were satisfied with it and we decided to start shopping it at that point, of course, we went back to the major labels here in Nashville," Reynolds explains.

"We've got so many good relationships with so many people at so many different labels. Obviously, we didn't want to dis anybody by not letting them hear it first and stuff. We were talking to the major labels, but we had also sent it out to couple of indie labels where we had connections."

Yet with Back Porch, it was a case of love at first listen, it seems.

"Back Porch actually just called our manager one day - just kind of out of the blue - and said 'We hear there's a new album, and we'd like to hear it.' And he (our manager) was like, 'Okay, I'll send you one.' So he mailed them a copy on Monday, and on Friday, they called back just over the top enthusiastic about it," Reynolds recalls.

"They were just, like, 'We want this album! We want to work this album!' There was that level of enthusiasm, and we have found at Back Porch a lot of people with just a great passion for music. A lot of times in Nashville, that kind of passion gets squelched a bit by numbers and bean counters."

"But in Back Porch, we found people who are obviously concerned about business and obviously good at the business they do, but at the same time they retain that really great passion for music. Almost instantaneously we knew that this was where we needed to be. And it's been a great decision for us from the word 'go.'"