For an up-and-coming young band in any genre of music, the imminent release of a new album is always an exciting time, and when it coincides with the opportunity to appear at a legendary venue, then life is very good indeed. It's a Thursday evening in late June, and Caleb Roberts, co-founder and mandolin player for the high-energy, traditionalist Colorado bluegrass outfit Open Road is speaking from backstage at the Ryman Auditorium, - the "Mother Church" of country music - only moments after their Opry debut and only a few days before the release of their third Rounder effort, "Lucky Drive." 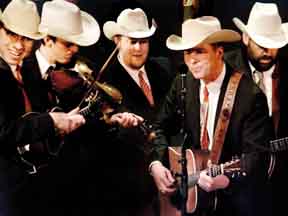 A normally talkative and effusive sort of guy to begin with, the experience has clearly shifted the 35-year-old South Carolina native's gearbox into overdrive, especially when he describes the aura of history emanating from the seats in front of them.

"I did the first break in the show, and the audience erupted up into applause - you know, the way the room sounds. It's familiar sounding because it's on recordings, you know, with the way the room resonates with the audience applauding, and so it was really kind of neat, a little eerie just sort of recognizing that sound, sort of like a live recording at the Opry from a while ago...I discovered that as I was playing there, and I was thinking about how I've heard that sound before, but on a recording. But they're a really great, attentive and enthusiastic audience, and that's always a lot of fun to play for."

A big part of the band's appeal to hard-core bluegrass audiences has been their continuing respect and reverence for the history of country music in all its forms. Roberts relates that his partner and co-founder, Bradford Lee Folk, knew exactly what he wanted his first stop on the tour to be, though it resulted in a minor disappointment.

"Brad was just telling me, the first thing he said when we came in was, 'Take me to see Roy Acuff's dressing room,' and they said, 'Well, all that's torn down. It's all new now. It's not the same as it used to be."

There was one poignant and bittersweet aspect of the occasion for Roberts as he dealt with the emotions of knowing that his father, a terminal cancer patient, was there to see them bring the Ryman crowd to its feet.

"(I was struck by) how incredibly nervous and overwhelmed he was by it, and he was glad that we didn't have any longer a set 'cause he was about to pass out. But I can understand that because we've played some big stages before, where it was really overwhelming, and this would be the biggest. I was a little cooler than I might be, but I had a great time."

Roberts and Folk (guitar and lead vocals) are the only remaining original members. Like most bluegrass band leaders, they've had their share of comings and goings to deal with. But for the last two years and more, they've had the luxury of having a pair of stalwarts with Keith Reed and Eric Thorin on banjo and bass, respectively, both on stage as well as on "Lucky Drive" and its predecessor, "...in the life."

Fiddler Paul Lee left the band shortly after studio work for the new disc was completed, and they've been using a rotating cast of fiddle fill-ins since then, as well as occasionally getting by as a quartet. The fiddle parts, Roberts says, are an integral part of the band's sound.

He pauses a moment, laughs briefly and continues, "I hesitate to say the position's open because there's a lot of people that want to play fiddle with us, but we're maybe kinda picky, and it's hard to find a compatible person and musician."

The Open Road guys are flattered at the frequent mentions of them being not only at the top of the thriving Colorado bluegrass scene, but the national scene as well. It's nice to hear, says Roberts, but even in the Mile High Rockies it's important to keep your feet on the ground.

"You're only as good as they say you are because we look at ourselves and we say, you know, we're only so good at our instruments, and we're only so good at singing...and we all try as hard as a lot of bands do in various areas of our performance or our practicing...We just have a certain thing that makes us what we are and makes our music what it is, and it is an identifiable sound, and we get excited about it, and a number of people do, and we're happy about that. As far as we can go with it, it makes us happy, and it's also so hard for us to think about, would we have to change something in order to go farther, you know?"

One of the songs on "Lucky Drive" turned into a lucky break when they managed the coup of luring California bluegrass icon Vern Williams into the studio after an absence of more than 20 years for a duet with Folk on "I'm Lonesome."