"This one will always be special," says Alecia Nugent of her self-titled solo debut on Rounder Records. "I got to do it my own way, with songs that mean something to me and with people I wanted to work with."

For a first-time effort, "Alecia Nugent" is a profoundly personal album. The disc's 11 offerings, each carefully selected by Nugent, capture the range of emotions she experienced while recording it in late 2000. 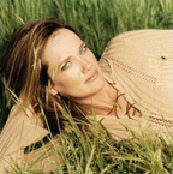 "I was dealing with some serious personal issues at the time," Nugent reveals during a telephone interview from her home in Hickory Grove, La. "I'm a private person; it's only when I sing that I can really open up."

Nugent's "therapy," out March 9th, is a vibrant collection of classic and new bluegrass-oriented material that she believes reflects the heartbreak, and ultimately, the triumph of those times.

Nugent was born and raised in Hickory Grove, a tiny rural crossroads in the northern half of the state. Her father, Jimmy Nugent, and his cousins formed the popular and enduring regional group Southland Bluegrass Band in 1972, the same year Alecia was born.

"Growing up, we lived and breathed bluegrass and southern gospel music," she says. "There's not a big bluegrass scene in Louisiana, so it was more of a hobby for us. Daddy always held down 40-hour-a-week jobs, and we all traveled with him and the band on weekends."

Nugent recalls "even before I actually joined the band in my early teens, Daddy would get me on stage to sing with him. The first time I heard that applause, I was hooked!"

Throughout the 1990's, Nugent juggled Southland Bluegrass Band performances with the responsibilities of marriage and motherhood. "They were tough years, and my three girls - Meagan, Santanna and Breanna - always came first. At the time, I was doing all I could do with my music - but not all that I wanted to do."

Those weekend gigs paid off, however, when she began to attract the attention of people who would later help her realize her dream of a solo career. Among those who were impressed with Nugent's direct, down-home vocal style were festival producer Johnny Stringer and his wife, Peggy.

"They are incredible people," says Nugent. "They love bluegrass music and really want to help people they think can do something with it."

It was at a 1998 festival in Elba, Ala.. that Stringer asked headliner Rhonda Vincent if she'd mind doing a number with Nugent. Vincent agreed.

"After all," Nugent laughs, "he was the promoter! I went backstage with her, and we worked up an arrangement of 'Have I Loved You Too Late,'" she recalls. "The crowd went wild. We got a standing ovation and ended up doing an encore, the Carl Jackson song 'I'm Not Over You'."

Later, at a "Legends of Bluegrass" festival in Columbus, Miss., Stringer offered to back Nugent on a solo recording project. He gave her the freedom to "'go get whomever you want to produce it'."

Someone else who had been following Nugent's blossoming career was veteran bluegrass performer-songwriter-producer Carl Jackson, whom Nugent first met at a songwriters' in-the-round in the mid-1990s. He, too, recognized something special in Nugent's talent, and had kept in touch with her over the years.

With Stringer's commitment to underwrite her studio time, Nugent's first call went to Jackson. He immediately agreed to produce the project. Jackson then set about rounding up a bluegrass supergroup to back her: Ben Isaacs on bass, Aubrey Haynie on fiddle, Randy Kohrs on Dobro and Ronnie McCoury on mandolin. Vincent, Rebecca Lynn Howard, Larry Cordle, Jerry Salley and Sonya Isaacs all agreed to help Jackson on harmonies.

Nugent and Jackson collaborated on finding the right material, but ultimately Nugent made the final selections. Once the sessions began, she says everything fell easily into place. '

Nugent self-released her CD in February 2001 and "mailed it out to just about every disc jockey in the country" she says. She was starting to get so me radio play, when "Carl played it for Eddie Stubbs, the Grand Ole Opry announcer, and he was impressed enough to believe I needed to be introduced to Ken Irvin from Rounder."

That came about at an International Bluegrass Music Awards post-awards party. Even though "it took a while", Irwin and Rounder Records "finally came around," she laughs. The label signed her on in September 2002.

The following month, Rounder invited her to record "Beautiful Star of Bethlehem" for "O Christmas Tree," a holiday compilation. That album started the buzz about this "new" talent (who had been performing for two decades!). Rounder repeated the strategy by including Nugent's "You Don't Have to Go Home" from her CD in their 2003 gospel compilation, "White Dove."

With Nugent's cuts comparing well with Rounder veterans on two well-received collections, the label was ready to re-release her solo effort.

The tone of "Alecia Nugent" is set with its very first cut, "I'll Stay Around," a jaunty Flatt & Scruggs tune from 1950 that gives Nugent, and each of the musicians, a moment to shine. "Even though the guys hadn't played together as group before, they all jumped right into it. They're professionals. It's what they do."

Her personal favorite from the CD is "Paper and Pen", co-written by Salley and Allison Mellon. An ironic story of miscommunication and its tragic consequences, Nugent says it is her most requested number. "It's just a great lyric, and people respond to it."

Jimmy Nugent and Alecia's brother, Roy Nugent, lend their voices to two cuts: the old Lou Reid hit "Red, White and Blue" and "But I Do," an obscure number by Louisianan Tibby Edwards, a favorite of the Stringers. According to Nugent, "having Daddy and Roy on hand meant a lot to me. When you've been singing together for as long we have, there's a quality there that you just can't get anywhere else."

One selection that Nugent was hesitant about recording was Tex Ritter's "Jealous Heart."

She was concerned that "it had been recorded so many times before, by so many people, that I wasn't sure I could do it in a fresh new way."

That's when Jackson came to the rescue. "We tried it a couple of different ways until we found one that worked." The result is one of those perfect three-and-a-half minutes when timeless material is presented anew by an expressive and passionate young performer.

A delay in the CD's national release heightened Nugent's anticipation of realizing her dream. Now, just weeks away from the release date, she is living the life of a busy, single, career mom. Her thoughts are on filling her tour calendar, making sure the girls are looked after and hoping for the kind of success that will make "Alecia" a household name.

Does she have any dreams of crossing over into mainstream county music?

"Bluegrass is where my heart is," Nugent says. "Country is not what it used to be, and I don't know that I'd fit in today." She intends for her music to stay acoustic, lyrical, and true to its roots. If there's any crossing over to be done, she hopes "it'll be country music crossing over to me!"