No matter how the final week of October played out, it was going to be a watershed in the lives of the Cherryholmes family, whose meteoric rise over the last few years has caught much of the bluegrass world by complete surprise.

On the heels of the September release of their first nationally distributed recording (self-titled on Skaggs Family) to enthusiastic reviews, they were at the annual International Bluegrass Music Association trade fair and awards shindig being held in Nashville for the first time. 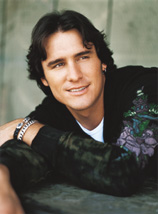 And his fan base certainly seems to stick with Nichols as he had the seventh biggest selling album in his first week out of any disc in the U.S.

So, why did he go for a change in his already good looks? "I don't know," he says, laughing during a telephone interview while waiting to hop a plane to Minnesota for a couple of shows. "I think most of all, I think it was personal reasons. I was just wanting to get healthy and get in the best shape I could get in. Cut the hair. Time to grow up a little bit."

"Everybody seems to really like it. Everybody's been pretty supportive of it. I'm very happy with everybody taking to it as well as they have. I kind of had a little bit of fear going into it thinking that maybe everyone's going to be a little bit against it, but everybody's been really cool."

"It was just something I really wanted to do. My hair was getting a little shaggy you know. I felt like it was time to grow up just a little bit at least."

While he was taking his hair in, he was looking to do the opposite with his music on his fourth major label release. His last regular album was a Christmas disc, but not all that many months before that, Nichols offered the inward looking "Revelation."

"I think we wanted to expand a little bit," says Nichols. "We wanted to maintain what we were used to doing - this hard core traditional country, but at the same time we wanted to branch out a little bit and get a little more aggressive with song selection and with production and (the first single) 'Tequila Makes Her Clothes Come Off' and things like that. We wanted to make more of a party album and show a funnier side of things, and that's what we did."

"It's just to remove ourselves a little bit from 'Revelation', not that "Revelation' was bad. We needed to get out of that mode. It was kind of an emotional, spiritual side to me, and I kind of wanted to break away from that and show a funnier side of my life."

As he has on every album, Nichols penned several songs for "III," which he feels shows his lighter side, at least to some extent, but also documents the changes in his life.

The 11th and final song, "Just a Little More," concerns the character sitting at a pool table, drinking and dealing with relationships with the final chorus "I need just a little more/A little more time/Time for me to and all these hurtin' ways of mine/And Lord, I know you give me all the strength that I need/But I'm down here on my knees prayin' for/Just a little more."

"I'd wrote about some of the personal things I'd been through, some of the living in excess," says Nichols.

"I think at the time, I was just living hard," says Nichols. "The first album came out. A lot of fast paced things were happening to me. I describe exactly what was going on. Maybe drinking too much here and there. Or gambling. Or staying up too late."

"I was hurting people around me and didn't realize it," says Nichols. "Just relationships of family and friends. Everybody was involved in my life, and I didn't realize (the problems)."

Nichols called the song "almost like an apology so to speak."

Nichols refers to it as "a good time, a party song." He penned it immediately after seeing the movie "Sweet Home Alabama," which starred Reese Witherspoon. "It's almost word for word," he says, referring to the plot line of the movie.

George Strait had the song on hold for a long time, meaning that he might put it on an album. However, that never happened.

"As far as the rest of the songs go, we wanted to make a good time album, something you'd pump in the CD player at 11 or 12 at night when you have 15 friends over at the house drinking a little beer," says Nichols.

The decision to opt for that approach "was a conscious one. For sure. It was something that I wanted to make on this album. I want to have a good time in the studio and I wanted that to translate on the record."

Nichols has done well out of the box with the hit single "Tequila Makes Her Clothes Fall Off," penned by Gary Hannan and John Wayne Wiggins, formerly of The Wiggins.

In an era where country music has gotten away from beer and heartache songs, maybe imbibing is in again. Brad Paisley just enjoyed a big hit with "Alcohol." Kenny Chesney sings "Beer in Mexico" and "Tequila Loves Me" on his November release, "The Road and the Radio."