Just a few weeks short of his 61st birthday, bluegrass icon Doyle Lawson eagerly anticipates the release of yet another in a long series of sterling releases since forming his own band, Quicksilver, more than a quarter-century ago.

The title, "You Gotta Dig A Little Deeper," reflects his continuing drive to meet or exceed not only the musical excellence that bluegrass audiences have come to expect, but also the exacting standards he has imposed on himself over more than four decades in the business. 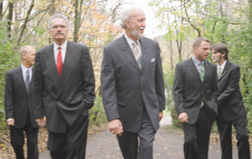 On top of that, the album represents his debut on the Rounder label.

"I'd been with Sugar Hill a larger part of the recording since I put my group together, but I just reached the point where things didn't seem to be happening like I expected, and I wanted to just take a little more control of my destiny, so I decided to leave and maybe resurrect my SSK label, but...when you do things like that as an artist, you've become a record company, whether you want to be or not, and that entails a lot more work, and you've got to look to do it properly and adequately. You really have to look to take on more personnel just to start taking care of a record company. "

"So, we just started to talk to Rounder for a while, and we took our time about reaching an agreement that we felt would be workable for both of us, and I decided to go that way. I think that Rounder is, in my belief, certainly the most energetic independent label that I can think of right now, especially when it comes to acoustic music and bluegrass music. I just felt like that at this point in my career, it would be a good partnership to have, and they seem really thrilled that we were able to work out an arrangement, and I'm already thinking that things are really looking good."

As he has throughout most of his career, Lawson self-produced, and experience has taught him that it's a fine line between being the performer and being the producer.

"You just about have to (maintain a dual role), and I've also remarked that it's probably harder to produce yourself than it is somebody else. I've not done a lot of producing other people simply because I don't have the time, but I know that it's really, really hard when you're producing yourself because, number one, you're probably at your peak as far as critiquing anything, you know. We often say...that we're our worst critics. And I think we're harder on ourselves than anyone else could ever be, and I know that I am."

"But when you do your own thing, you're not only trying to measure ' up to yourself and meet your expectations, but you're also aware that people have come to expect a certain standard of recording and level of excellence, if you would put it that way, and I guess that what I'm ever mindful of is the fact that I don't dare let down or even think that I should, but...(when) it meets the level that the prior ones have done, you know that you've not let down on the job or taken things for granted."

Lawson knows better than most that turnover, especially in bluegrass, is an inevitability for a bandleader, but heading into the new album and for the last few years on stage, he's had one of his most stable periods.

In fact, the most recent addition to the band is an old hand, banjo player Terry Baucom, a member of the original 1979 Quicksilver lineup who returned in 2003. It has been a delight to have Baucom's knowledge and experience to draw on again, according to Lawson.

"Terry was in on the ground floor, and it was, for us, just business as usual. I know what to expect from Terry, I never have to doubt what I'm going to get from his performance, be it vocals or his wonderful banjo playing. No, we just went at it like we've done in the past because I knew he was going to give me the best that he had."

Rounding out the current band (Lawson himself is, of course, among the pre-eminent mandolin pickers in the music) is a trio whose talents Lawson truly treasures.

"(Bassist) Barry Scott's been here about eight and a half years, Jamie Dailey (guitar) about six and a half years, Jesse Stockman three years, and of course, Terry's working on two years." He lets out a chuckle and adds, "Hey, it might all blow up tomorrow, but right now, it's pretty stable."

"You have to be prepared, and you hope the people you have in place will stay forever, but they can decide that at any given time that somebody's gonna get restless and decide to move on for whatever reason. You wish them the best, and you look around and try to find somebody to put in that slot, and keep going."

Though known and revered as much for his gospel output, the new disc is a new adventure in straight-ahead, driving bluegrass and searching for interesting material not previously thought of as "bluegrass songs" has also been a hallmark of the Lawson sound.

"If it's a good song, you give it your treatment...Thirty years ago, J. D. Crowe and I were doing Fats Domino stuff like 'I'm Walkin'' and Roy Hamilton's 'You Can Have Her,' which were rock-and-roll songs, but we did it right-down-the-middle, hard-drivin' bluegrass, and the people loved it. I really don't think it matters where the song comes from. It's the way you treat it."