When a song moves bluegrass singer James King to tears he knows that it's time to head back into the studio. And, that's exactly what he did recently to record his latest disc, "The Bluegrass Storyteller."

After a dozen years singing sorrowful songs, the high and lonesome baritone clearly knows when the time is right to make some more music.

Driving through Chicago, on the way to Hayward, Wisc. for a string of 3 dates at a casino, the 46-year-old emotive storyteller talks about his influences, what makes a good story and his new album - recently released on Rounder Records. 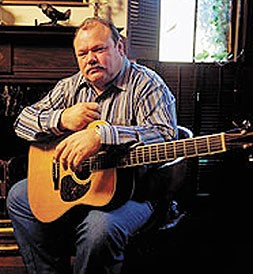 King is very excited about "The Bluegrass Storyteller," his fifth solo record for Rounder and his first since "Thirty Years of Farming" (2002).

"Ken has been my mentor," says the 2003 nominee for IBMA Male Vocalist of the Year. "He has steered me in the right direction, and he has had great ideas for me that really has panned out to be something. He came up with the idea for this album of doing a bluegrass story record filled with a bunch of ballads. He knows what to do with an artist...that's what I like about him."

Born in Martinsville, Va., the bluegrass artist was raised in a hotbed of bluegrass music, around the counties of Carroll and Grayson. Grayson is known as the capitol of old time music, and this region has produced plenty of fine pickers over the years, including Wes Golding, who used to play with Ricky Skaggs.

"If you are from this neck of the woods, you get a teaching," says King. "A lot of good pickers come out of that area...there's just a ton of music. It certainly helps to be from the mountains.

It wasn't hard for King to fall in love with mountain music growing up since his Uncle Joe Ed played the fiddle, and he went to fiddler conventions a lot as a child.

"Now some singers such as Dan Tyminski (he grew up in Vermont) - he's great now...he's a monster, but if he had been born in the country like me down there in them mountains, there's no telling what he might be."

As a teen, King practiced his singing and guitar playing. A key aspect of King's development was meeting banjo player Ted Lundy, founder of the Southern Mountain Boys.

King's uncle, Joe, played with Lundy, who was based in Delaware, for about two years. That, in turn, led to King replacing his uncle upon his death in a car accident. Lundy came to the funeral and told King if he was interested in playing, he was welcome.

By 1980, King joined the band, but he eventually signed up for the Marine Corps and lived in New York before returning to Delaware to play in a band with Lundy's two sons.

He also was able to record two albums with Ralph Stanley in the 1980's on a small Washington label.

Another break for King came in 1992 when Dudley Connell, then of the Johnson Mountain Boys, recommended him to Irwin. King wanted Connell for a project, which became "These Old Pictures," released in 1993.

The album, and its successor, "Lonesome And Then Some" (1995) were well received, leading to King's stature rising on the bluegrass circuit.

A former Marine, King certainly has discovered what his voice 'can be.' Music critics have praised him for his baritone that can make even the most steely-eyed man weep. Bluegrass Now once described his voice as "hardcore, cry-with-your-head-on-the-steering-wheel, road-hewn bluegrass."

"It's a gift," King simply says in response to all this praise.

It was another Appalachian bluegrass buddy - also known for his soulful singing - that helped to first introduce King to one of his idols - songwriter Tom T. Hall, several years back.

"Charlie Sizemore (a Clinch Mountain Boy with Ralph Stanley) and I became friends in the '80s and the '90s, and I just asked Charlie one day...I would really like to send Tom T. one of my CDs and see if he likes my style of bluegrass music," King explains. "So, Charlie gave me Tom's address, and I sent the CDs, and Tom and I became big friends and the rest is history."

It's only fitting then that Hall (best known for penning "Harper Valley PTA") gave King the title that graces his new disc. As quoted in the disc's liner notes, "For a long time, I have considered James King to be the Bluegrass Storyteller."

King, for his part, is flattered by this assessment. "That's a big honor to be dubbed the storyteller by Tom T...the greatest storyteller of all," says the humble singer. "Tom could make up those stories...not only could he tell them he could make them up in his head," King says.