The Gourds go heavy on ornamentals

The Gourds know how to throw a party. The Austin-based quintet is best known for rowdy live shows that showcase their ability to blend Tex-Mex and zydeco styles into their own unique brand of energetic hill country twang.

But sometimes the substance of their working-class ballads gets lost in the midst of the midnight fiesta. It shouldn't. Sure, for the past nine years chief songwriters Kevin Russell and Jimmy Smith have excelled at penning witty tongue-in-cheek stories that often border on silly. This is fun music, after all. 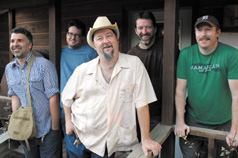 But on their new album "Heavy Ornamentals," The Gourds prove once and for all that they're plenty cerebral, too.

Case in point: "Our Patriarch," the centerpiece of "Heavy Ornamentals," out on Eleven Thirty Records in January. The track is a slow-turning, thoughtful meditation on modern-day ideological changes that highlights the musical finesse of the band - Russell, Smith, mandolin player Max Johnston (formerly of Uncle Tupelo and Wilco), Keith Langford on drums and Claude Bernard on accordion and keyboards.

"It's just a beautiful melody," Russell says. "It's that feeling about fathers and sons and the feminization of society. I'm not against that, but it has happened over the past 30 years. It's for the best (because) we're progressing. The old patriarchy is dead."

The song's hushed tone is a departure for the party-hearty band. Seems that was just a result of the practicality of writing on the road. "It's part of a series of songs I wrote on tour a couple of years ago on the ukulele," Russell says. "It's the smallest instrument I could get in the van, and it's quiet enough not to bother everybody."

The band caused its biggest stir to date in 1998 with the release of the EP "Gogitchyershinebox." The album included a bluegrass take on Snoop Dogg's "Gin and Juice" that became a staple of college radio and a popular Internet download. (many web sites wrongly attribute it to either Blues Traveler, the Dave Matthews Band or Phish.)

Most obscurely, the band provided the soundtrack to the documentary "Grow a Beard." The Gourd's music was a perfect fit for the surprisingly captivating look at a Donegal beard growing competition in Shamrock, Texas.

Fans understand The Gourds' grassroots attitude, but the rest of the world might be surprised by the way the band recorded "Heavy Ornamentals." In a day when most have gone digital in the recording studio, The Gourds reverted to analog equipment.

"That was borne out of necessity for us because we're always working on small budgets," Russell says. "We wanted to get the most bang for our buck." The result is a refreshingly organic, rootsy song cycle.

The other 12 originals on the new offering are a more comfortable musical fit for Gourds fans than "Our Patriarch." That is to say they have more inner fuel than a barn fire. The glorious "Declineometer," a curious homage to volume knobs, raises the roof right off the bat. The song mixes the brawn of classic rock with the experimentation of '80s indie music and lives up to restless spirit of the Johnny Thunders reference within.

"Burn The Honeysuckle" features typical Gourds word play in describing a woman: "Married me a girl raised on mustard green and beer/Chimney brown and lanky/Smoke all in her hair/She bore me seven babies in 10 years time/Skin like tobacco and eyes like wine." Russell admits that sometimes there's no linear truth to his and Smith's songs: "Some of (our) songs are just mysterious nuggets."

"Hooky Junk" certainly fits in that category. A longtime live favorite, the band finally decided to commit it to tape.

But the majority of the songs, like the direct country weeper "Pill Bug Blues," show The Gourds maturing as songwriters. Bernard feels the songs on "Heavy Ornamentals" are "less wacky. We've had some crazy shenanigans on our records, and I think this record is less off on a tangent."

Russell's particularly fond of "Shake the Chandelier." With its flow set to the groove of Doug Sahm's "She's About a Mover" and the chorus lifting that song's signature "Hey-ee-hey" line, it's an obvious homage to one of Texas' most influential songwriters and performers.

"Oh yeah, (Doug Sahm)'s a huge influence," Russell says. "We discovered him after we'd already formed as The Gourds, (and) we eventually met him at a festival in Belgium. He jumped onstage when we were playing one of his songs. He stole the mic from me - that was awesome."

Like those who adored Sahm, Gourds followers are a generally literate bunch who choose to ignore the gospel of popular society. In fact, the band's web site proclaims that The Gourds produce music for the "unwashed and well-read."

Russell sees that as a figurative statement that's a stance to be worn as a badge of honor.

"I think it's a way of saying that (our fans) are not too trendy, they're not too wrapped up in wearing the right clothes," he says. Russell pauses for a laugh before continuing. "Billy Gibbons (of ZZ Top) once came to a show of ours at the Continental Club in Houston. He said, 'You guys are good, man, but y'all need some new clothes.'"