From the beginning of his career, Robbie Fulks has typified the go-your-own-way ethic of the insurgent country genre, defining it through his recordings and performances even as he sought to distance himself from anything remotely resembling an organized movement.

His short-lived and generally unsatisfying major label experience with Geffen was book ended by two tenures with Bloodshot, all of which showcased Fulks' take-no-prisoners brand of traditional country, roots rock and his own unique spin on all of it. 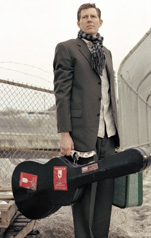 The latest chapter in Fulks' contentious career is perhaps the most ironic. The man who famously wrote "F*** This Town" about his Nashville experiences has just released "Georgia Hard," his debut for Yep Roc and one of the most authentic and traditional country album he's done to date.

After listening to tons of country music from the '70s over the past couple of years, Fulks decided it was high time to translate the love and respect he felt for some of the era's great musical craftsmen into his own work.

Fulks had previously managed to show his love of his forefathers' work in sufficiently tangible forms, with the 2002 release of his obscure country covers album "13 Hillbilly Greats" and last year's phenomenal tribute to Johnny Paycheck, "Touch My Heart," on which Fulks produced and performed.

At least some of the inspiration for "Georgia Hard" came from his work on "Touch My Heart."

Although the atmosphere on "Touch My Heart" at least tangentially inspired Fulks to turn that same flame up under his own work, he was already headed in that direction to begin with.

"I was really in the mood for writing a set of country songs, with the kind of chronological bent that these songs have on them, which is maybe the period of country between 1965 and 1980 or so," says Fulks from his south-of-Chicago home.

"Maybe even up to that little window of time in the late '80s when I was first getting into country when I was a kid, and there was like that integrity explosion with Dwight Yoakam and Marty Stuart and those guys. It'd been years since I'd written a bunch of country songs because I'd done some hybrid pop/country/folk records, and I just felt like doing it. That's not a good answer, I know, but there was no particular manifesto. I just felt like it."

The most significant effect that the "Touch My Heart" sessions had on Fulks was when it came time to think about the structure of the songs he had written for his album.

"I would say it had a big impact on the way that I arranged them and storyboarded them and went into the studio with them," says Fulks. "I used all those players from that record in combination with my road band, and the experience of working on that record was really special and kind of significant for me. It's always so eye-opening to be in a room with first rate performers. Like Lloyd Green was so instrumental in creating some of the original music that I try to emulate in my work."

"And those guys, when they get together, they're like a living organism that's composed of five different heads. You can write out a chart and put it in front of them, but at times it's almost meaningless what's on the page. They've got such big ears, and they all tuned into the exact same sound and in that case the same era we were playing for, and it just springs to life in front of you."

"Then you realize you can hire the best players or work it as hard as you can with talent, but it's not talent. It's something that genetic. That really came home for me making that record, and I don't know how to say it influenced this record except to say that I just love listening to those guys play, and I couldn't wait to write songs to put those guys in. I was really happy with the way it turned out. I wish more people would have bought it."

Although Fulks could attribute inspiration to any number of artists, there are a few that he relies on consistently, and they show up once again in the fabric of "Georgia Hard."

"Well, Roger Miller is an ongoing impact in my life," says Fulks. "The more I listen to country, I find all sorts of people that I didn't know about before. It's a bottomless well in one respect, but in another it seems that you can't equal Roger in a lot of ways. He just had it all going on, as a writer, a musician, a singer and just as a really broad talent that was able to translate his particular odd muse to big masses of demographically diverse people."