Freakwater finally is "thinking of you”

The cover of "Thinking of You," the seventh release from Chicago alternative country band Freakwater, looks like a greeting card from hell. The cover depicts a bouquet of roses engulfed in flames and the ominous text: "Freakwater is Thinking of You." 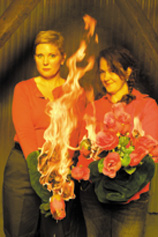 "The cover was incredibly controversial, but we were so proud of ourselves when we sent it to the record company," explains Freakwater co-lead Janet Beveridge Bean, 42, on the patio of her Chicago home.

At first, Tina Richards, owner of the Thrill Jockey label, was a bit taken aback.

"Tina said, 'I'm just stunned. I don't know what to say. Are you trying to not sell records? In Germany, they are not gonna get this.' But I liked the idea of the menace it represented," says the other half of Freakwater's public face, Catherine Irwin, 43.

"I think the ugliest album covers stand out a lot more than the tasteful ones," Bean explains. "Someone said it reminds them of what it would look like if David Lynch made a greeting card."

Eventually, the label capitulated, and the Freakwater ladies got their way, but it's more than a little surprising that anyone would be shocked when Bean and Irwin aim for darkness and black humor.

For nearly 20 years, Freakwater's music has explored the dark side of American life through Appalachian hollers and mournful mountain ballads full of death and self-destruction.

When forced to describe Freakwater's music to strangers, Bean blanches. "If people ask me what kind of music I play, I start to stammer and don't know what to say," she admits. "I say it's like country music, but not like what you hear on the radio. It's real mopey, sad, primitive country music. It's not the country music people like. It's not like the kind of country music that's popular."

In person, Bean and Irwin couldn't be more pleasant. They portray the self-deprecating and easygoing nature of women who have been friends forever - finishing each other's sentences and laughing a lot. Then from where does all this darkness emerge?

"I don't think that dark subject matters are peculiar to country music," Bean maintains. "I really think it's just that you can understand what people are saying. Most rock and roll music is about self-destruction and dead people, too."

The duo met in the early 1980s when they were both active in the punk rock scene of Louisville. They began performing old time country in the tradition of The Clancy Brothers or The Carter Family in front of punk audiences at live gigs.

"When you're 16 or 17 and you're singing in a punk rock band, country music was along the lines of perversity like everything else we were doing at the time," Bean recalls. "Everyone else around you would think you were really crazy for singing it, which became even more of a reason to do it."

Oddly enough, the duo took off, and Freakwater has experienced a longevity that is all but unheard of in the world of alternative country. This is particularly noteworthy since the group that has largely rejected the trappings of modern music. In the past, Freakwater albums have been sparse, largely acoustic affairs driven by the oddball non-harmonies of Bean (the high voiced one) and Irwin (the low voiced one).

"Thinking of You" is Freakwater's first recording in six years. Since the release of the band's 1999 album, "End Time," Irwin recorded a well-received solo disc titled "Cut Yourself a Switch," and Bean made an album with her own side-project, The Concertina Wire.

"Thinking of You" was produced by Tim Rutili of Califone (also on the Thrill Jockey label) and features a supporting cast of musicians from Rutili's band. The result is a richly-textured affair with drums, organs, fiddle and some electric guitar. But the centerpiece of Freakwater remains Bean and Irwin's unique vocals and creative wordplay.

"When we were going to make this record, I remember talking to Tim, and he was asking me questions about what he wanted things to sound like," Irwin remembers. "I kept not being able to answer him. The closest I got was when I brought him a copy of (Bob Dylan's) 'Nashville Skyline.' I liked the floppy sound of that record."

"We were a little reticent because we'd never worked with a producer in that capacity," Bean says. "You can always make a record without much on it, but the opportunity to do it a different way doesn't always come."

"Some people have what they're doing in the studio very well figured out and it's very planned, and they make brilliant records," Irwin adds. "That's just not the way we've ever done it. I don't think that either of us organized enough to do it that way."

For all the ballyhoo surrounding Freakwater's updated sound, it's unlikely that the group will be percolating onto Country Music Television or playing stadiums any time soon. The core elements of acoustic Appalachian country still reign supreme on "Thinking of You," and the addition of electric guitar fuzz here and there is unlikely to break the band free of its niche appeal.