Jesse Dayton may boast one of the most impressive resumes of any modern country artist not immediately in the public eye.

The Texan has done session work with the likes of Ray Price and Waylon Jennings (with whom he's also performed), as well as the Seattle-based punk band The Supersuckers.

There have also been opening slots with Merle Haggard, George Strait and former Clash frontman Joe Strummer, among others. There's been movie and TV soundtrack work.

And songwriting collaborations with Dale Watson ("Caught" from Watson's first album) and Rosie Flores ("Heartbreak California" from Dayton's latest) round out Dayton's resumZť. 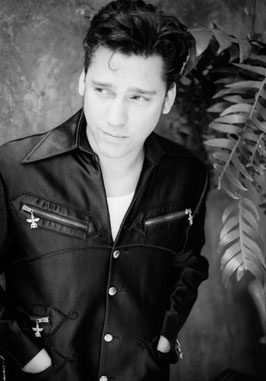 Dayton, 35, grew up in Beaumont, Texas, a city known primarily for its oil industry, blood-soaked honky-tonks and the fact that George Jones (with whom Dayton's father went to high school) grew up there.

"I come from a long line of fire fighters, oil men and that kind of thing. We've been down there for generations. I grew up listening to 24-hour Cajun and classic country stations. Until I was 15, you had to try to tune into a rock station in Houston because we didn't have one."

Though Dayton started out as a drummer, he began playing guitar as a teenager.

"I learned a lot of guitar from this guy named Mack Minor, who was a country-blues guitar player. He was Mance Lipscomb's and Lightnin' Hopkins' cousin. He played on some of their recordings. I actually have footage of me and him playing together when I was a little kid."

"When I got out of high school, I went to Austin, which every Texas guitar player does. I really was just a guitar player for a long time. That helped me out, looking back on it, 'cause when I got to play with Waylon and Ray (Price), I had spent years working on my chops."

Dayton's "Hey Nashvegas!," is a fine album; at its core as hard core country as any Dale Watson album, but at the same time it's not hard to imagine radio getting behind uptempo numbers like "Never Started Living" and "Date With the Angels" if radio were more inclined to play independent releases.

Dayton's secret weapons, though, are his savvy songwriting and a graceful baritone voice that's equal parts Jones and Conway Twitty, with perhaps a little Watson thrown in as seasoning.

"George Jones is my favorite singer. The first concert I went to was a George Jones concert at the Beaumont Drive-In, and he didn't show up. We got our money back and went back the next week, and he came out totally smashed; sang like five songs and left. Tripped over the monitor."

Throughout much of the '80's and '90's, Dayton led a rockabilly trio, the Road Kings, who recorded four albums before splitting in the late '90's.

"The Road Kings were my first band. We played hot rod country music. Up until that point, I was all about the groove and the riff, and that was the extent of my songwriting. As that progressed, the limitations of playing in a trio were getting on (my nerves). I was writing stuff for twin fiddles, border songs, Cajun songs, and trying to sow my oats as a writer. And you can't really do that in a trio."

In fact, Dayton's songs are far removed from the usual wham-bam-thank-you-ma'am rockabilly approach to arranging.

"(When) I started trying to write songs, I met (Jim) Lauderdale at the Continental one night, and he really encouraged me to get the songwriting thing going. Jim didn't so much teach me as he influenced me as far as (setting) a bar of writing. When he came into Nashville after (Rodney) Crowell, he set the standard, and that really influenced me. It was like an epiphany. I started going to Nashville and writing songs - got a publishing deal - and tried to find my own voice as a writer."

Until about a year ago Dayton had been spending most of his time living in Los Angeles, though also renting a room from a friend in Austin for when he was in town.

"When I was in Los Angeles recording with Ray (Price, on whose last album Dayton played guitar), I got to record with Pete (Anderson), too. Him and Dwight (Yoakam) let me use their studio as much as I wanted. Which was awesome because I got to learn all kinds of production stuff, which was a big influence on me. You learn all these little tricks, shortcuts and ways to make songs sound like records."