Death didn't come first for Carl Smith. Unlike some his peers, most noticeably Webb Pierce, Smith lived to see his induction into the Country Music Hall of Fame.

Floyd Cramer did not. Inducted with Smith as 1 of only 2 members chosen for induction this year, the legendary piano man and member of the famed "A-Team" of Nashville session musicians, died 5 years ago at age 65.

No one argues the selection of either man to the hall of fame and certainly not Nashville's WSM radio personality and Grand Ole Opry announcer Eddie Stubbs. 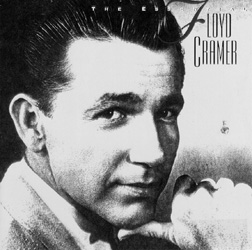 Country singer Patty Loveless was pleasantly surprised when she learned of the announcements of Smith and Cramer's election to the Hall of Fame.

"I think it's wonderful that they are being inducted into the Hall of Fame," Loveless says. "Floyd Cramer, my Lord, I loved hearing him play."

Smith's career dates back to the 1940s when he worked on radio station WROL in Knoxville, Tenn. The Maynardsville, Tenn. native made impressive career strides early in life. By the time he was 23, the tall and lean Smith was signed to mighty Columbia Records and was a member of the Grand Ole Opry.

Round about the same time a bit farther south, Louisiana native Cramer joined the Opry's counterpart the Louisiana Hayride in 1951.

Having started on the piano at age five, the prodigious pianist hired on as a staff musician with Abbott Records where he played on songs with Jim Reeves, among others. He moved to Nashville in 1955.

"Carl Smith made the statement to me once. He said, 'You know, I sold more records than Hank Williams did.' And I thought that was a pretty profound statement," Stubbs says.

"However, if you go back to the days of the single releases and if you're today a collector and you're combing through used record stores or eBay or mail order record auctions, those Carl Smith 78s on Columbia Records are still extremely plentiful. They can be found all the time. That's a great barometer as to how well an artist sold. Very rarely will a Hank Williams 78 or 45 show up. It's not because he was so popular. People scarfed them up. It's because there weren't that many made. MGM Records was an independent label so to speak. It wasn't a very big company."

That it took so long for Smith to be chosen irks Buck Owens, a member of the Country Music Hall of Fame since 1995.

"My God, that's unbelievable," Owens says by phone from Bakersfield, Calif. "And he had a lot of hits. I don't know if he had as many as Webb Pierce, but he must have been close."

He was much more known for 1960's instrumental "Late Date," which peaked at number 11. But Cramer's calling card was that as a studio musician, having appeared on countless records, including those by Elvis Presley, Chet Atkins and Jim Reeves.

"I'm glad that (Smith has) lived to see this honor," Stubbs says. "I'm sorry that Floyd Cramer didn't live to see it, but Floyd was one of the architects of the Nashville Sound. It's a great, great thing that he's being honored and the musicians are starting to be recognized. An artist is only as good as the musicians behind them. On the stage or on records. As a broadcaster, one of the things I really don't like doing is talking over the intros of a record because to me it's a tremendous insult to the musicians, and they've always been second class citizens by the record world largely. They're hired help. It's a catering staff to make the record sound good."

Cramer was inducted in the Hall of Fame's newly established musician category, which will every few years induct a studio or road musician who greatly impacted country music.

Of course, there are still numerous hitmakers who've yet to be inducted. Among the more obvious omissions to date include Sonny James, Jean Shepard and Mel Tillis.

"It's hard to understand these things sometimes," Stubbs says. "There's so many people that have been nominated, and they have different classifications. I'm not sure what category Carl was in this year. Floyd Cramer was in the musician category. This is the first year they've had a musician category. I think that's only going to come up every two or three years now."

Owens says that perhaps the reason why he and others such as Pierce and perhaps Smith were made to wait on the Hall for so long amounts to enemies made at some point in the past.

Owens said that he proposed for years the all-at-once inductions of 10-15 deserving artists before the Hall decided to exactly that 2 years ago when they chose to induct 10 at once.

"You know, what I proposed to 'em is why don't you pick out about 15 of the people like Waylon and Mel Tillis and make it 1 year, and put 'em in the hall of fame," Owens says. "So, they said, 'that's a good idea, Buck.' I never heard another word about it. So, I proposed it again a couple years later. 'Boy, that's a good idea, Buck.' Never heard from 'em again. What are they gonna do, wait for 'em to die? It's like Waylon said on the radio one time, 'Nashville ain't much on the living, but they're sure hell on the dead.' They don't pay much attention to you while you're living, but once you're dead, they love the hell out of you."

As for Smith, perhaps because of the climate of which Owens noted, he's been retired since the early 1980s and lives far from Nashville's spotlight these days. He and wife Goldie Hill Smith (herself a fine country singer from the past) instead spend much of their time raising horses on their farm in Franklin, Tenn.

But that doesn't mean that Smith severed ties with his peers from the past. He still on occasion turns up backstage at the Grand Ole Opry to visit with old friends like Jimmy Dickens and Porter Wagoner.

Repeated efforts to reach Smith for comment met without success.

"The last time I recall seeing Carl Smith was at a George Jones birthday party," Loveless says. "They were just sitting around and singing. These guys have been a part of country music for a long, long time."