The Chapmans play it simple man

Calling from just north of Little Rock, Ark., Jeremy Chapman - mandolin player and lead/harmony vocalist for The Chapmans - is driving home with his bluegrass brethren to Springfield, Mo. to teach a few musical lessons.

You would think after two successful albums and an Emerging Artist of the Year award from the International Bluegrass Music Association (2002), The Chapmans wouldn't have to hold down day jobs anymore. 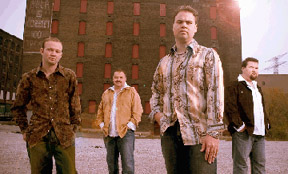 "We enjoy it, and it's a little extra money for car payments and stuff like that," says Jeremy, who currently teaches approximately 11 students.

He started playing mandolin when he was around nine years old. Like most kids, he admits "the hardest part was getting me to practice. That was the thing that mom and dad had to convince me about the most."

Now, the 25-year-old picker is teaching a future generation the discipline required to hone their craft.

The Chapmans officially began in April 1989 with a gig at the Bear Valley Inn in Colorado.

"The band just got together piece by piece almost by accident," says Jeremy. "It started out that dad was playing banjo, and (brother) John was playing fiddle with some friends. Then mom started on bass at that time, and I tried to play the guitar, but it was too big, so I ended up with the mandolin ... it was the only thing I could fit my hands around. Then, John discovered guitar and switched over to that."

Mom has since stepped away from the stage; still, for The Chapmans, the band is truly a family affair.

And, as Jeremy explains, this is actually a blessing - especially when it comes to singing.

"I think it has a lot of advantages," he says. "Family vocals makes phrasing almost easy because everyone talks the same, you have the same way of saying words, so when you are singing together, you can phrase things almost exactly like your brother is singing it...Being in a band together as a family you are also able to point out things that you normally wouldn't do if you weren't family...that part that you really don't like you just tell them about it. Whereas if it was a friend, you would be a little more reserved on your critique."

Jeremy's mom and dad got their sons interested in this high and lonesome music from a young age. Jeremy says that his parents were big fans of the Denver-based bluegrass band Hot Rize in the early '80s, and they started going to their shows and buying bluegrass records.

"We just kind of grew up around it, so that's probably the way we absorbed it," he says.

In 1995, The Chapmans moved from Colorado's Rocky Mountains to Missouri's Ozarks to facilitate nationwide travel. "Most of the bluegrass shows are east of Missouri, so that seemed like a more central location," Jeremy explains.

The Chapmans jumped into the national spotlight in 1998 when they won the International Bluegrass Band Championship held by the Society for the Preservation of Bluegrass Music in America.

Combined with the critical acclaim of the band's first independent album, "Love's Gonna Live Here," the win paved the way for The Chapmans to sign a record contract with independent roots and bluegrass label Pinecastle Records.

"Simple Man," released in April, is the band's third album for Pinecastle. Produced by Rhonda Vincent's brother Darrin, it showcases a natural evolution from 1999's "Notes From Home" and 2001's "Follow Me," which established The Chapmans as rising bluegrass stars.

The Chapmans charged into the bluegrass scene at exactly the right time since the music has seen an increase in popularity in recent years.

"Everybody has seen a big resurgence in the last few years with a lot of the bigger country artists like Dolly Parton, the Dixie Chicks ... all those country groups doing some bluegrass albums," Jeremy explains. "Also 'O Brother, Where Art Thou?' gave a big boost to bluegrass."

"I think part of it is that in the past people had a stereotype of bluegrass as more of an unsophisticated type of music," he continues. "Now that they are hearing it, they see that there is some real sophistication to it like with Alison Krauss and Nickel Creek, and they are realizing that there are great musicians playing it, and it's not quite as hillbilly as they imagined it." There's nothing hillbilly about "Simple Man," and don't let the title fool you either since the record was not so simple to make - it actually took four years.

According to Jeremy, taking this extra time was definitely worth it. "It's been four years since our last album, and we have spent two years of actually working on this one," he says. "We have been going through demos the whole four years. Once we started rehearsing with Darrin and we started laying tracks, it's been almost two years."

"Part of it was knowing that it had been four years, and we wanted to make sure that it topped the last album. Also, we built our own studio so that we had the opportunity to spend more time on it than we normally would have if we were paying for studio time every day. We were able to record something, then listen to it for a couple days and see how it felt, then go back and fix some of the parts and spend more time on it like we would have liked on other albums, but just couldn't afford to do without owning the studio."