One of the sweetest and most genuine-sounding country CDs of the year is "Begonias" by a couple of unlikely, in their own eyes, folks who both thought they'd be doing something else.

Caitlin Cary went to North Carolina State to get a graduate degree in literature and ended up singing and playing fiddle in the influential alt.-country band Whiskeytown.

Thad Cockrell went to Wake Forest to study religion at Southeastern Baptist Theological Seminary and ended up sitting on Cary's front porch writing songs on Sunday afternoons until they both found time to go into the studio for a few days and record an album together. 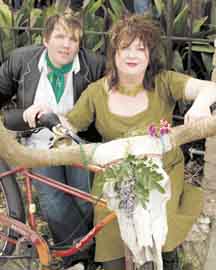 "I had no earthly idea that I was going to be a musician," Cary says. "But there's a great scene in Raleigh, and I arrived at exactly the right time to change the course of my life."

She got a phone call from somebody she'd never met, but who'd heard she played fiddle and wanting to know if she wanted to come practice with a new band.

She did. During her undergrad days, she had played with a country cover band called the Garden Weasels. She'd played a little in Houston and Richmond, Va., before entering North Carolina State's Graduate Program in Creative Writing.

That was in 1994. The new band, fronted by a young rock musician named Ryan Adams, became Whiskeytown, which USA Today's Brian Mansfield called one of alt.-countries "deities."

"I got a call just out of the blue," Cary says, "and it was Ryan saying, 'I'm doing this band. We love Uncle Tupelo, and we're practicing tomorrow, can you come over?'"

Cary wasn't that familiar with Uncle Tupelo, but she decided to check it out.

"It was just a really strange confluence of events that made Whiskeytown a 'thing' rather than a local band that played on weekends. We just hit on something at the right time," she says. "I really didn't know what I was getting into and at every phase I kept feeling a sense of unreality and thinking 'What the hell am I doing here?'"

After Whiskeytown's sometime volatile life ended, Cary released solo albums "While You Weren't' Looking" in 2002 and "I'm Staying Out" in 2003. She also got together with Lynn Blakey of Glory Fountain and Tonya Lamm of Hazeldine to create the critically acclaimed Tres Chicas.

In 1997, Cary's husband, Skillet Gilmore, was playing drums with a young singer-songwriter named Thad Cockrell. Gilmore introduced the two. Or Cockrell introduced himself to Cary at a local bar. No one's sure anymore.

One day Cockrell brought some of his songs to Cary while she was working at a now defunct restaurant, Humble Pie.

"I've been sorta this somebody who people come to and give me CDs from their band," she says. "I try to listen to them. Thad came up to me and said, 'These are songs I wrote. Would you listen?'"

"His songs blew me away. He was a new guy in town and a budding musician. We developed this relationship immediately - not like big sister, little brother, but just making music - and it flowed and felt good. We liked the way our voices sounded together, and we'd sit in with each other on songs when we could."

Cockrell came to Raleigh to attend the seminary.

"It was just academically an amazing seminary," he says. "It's probably the most liberal education I've ever had in the sense that they really studied people's belief systems and had a firm grasp of what they believed and pushed the students to understand other people's thoughts. At the end of the semester, you'd have to defend a different point of view from yours."

Cockrell's tenor voice is modern, but his approach to country music is traditional.

His father and two brothers are Baptist preachers. Growing up in Tampa, Fla., Cockrell heard lots of Southern gospel, but didn't hear much country music until local radio stations introduced him to the likes of Merle Haggard and George Jones.

In college, Cockrell spent many evenings playing for tips at a small coffeehouse near campus.

He recorded his first CD, "Stack of Dreams," in one day as a demo and released it through Miles of Music Recordings, an offshoot of the Los Angeles roots music mail order company. Cockrell and Cary did a version of the Buck Owens classic "Together Again," and Tift Merritt added backing vocals on "Why." His second, "Warmth and Beauty," graduated to the independent YepRoc label, which also released "Begonias."

Cary grew up in the small northern Ohio town of Seville, hoping to become a writer or maybe a veterinarian. As a young child in a musical family, she wrote songs that she performed on her dad's homemade harpsichord. When she was around six, she started studying the violin.

As a child, the music in her home classical and Irish, and folk icons like Doc Watson, Woody Guthrie and Pete Seeger.

Cary and Cockrell fit together seamlessly on "Begonias," which they recorded in Nashville in, as the media material says, "real time," which is supposed to mean all the musicians played all the songs together at the same time to help create and preserve a natural sound and feel.