To classify the past three years of BR549's existence as tumultuous would be textbook understatement. Amazingly, not a trace of the band's recent upheaval is evident on their latest album, "Dog Days," their seventh overall and second for Dualtone. 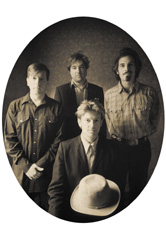 This new aggregation would prove to be painfully short-lived. The quintet concocted a typically impressive live set and toured the U.S. and Europe extensively, then came back and put together the band's first concept album and debut for new label Dualtone, 2004's "Tangled in the Pines," to equal amounts of acclaim.

But soon after the album's release, Firebaugh and Scruggs also exited the band, and BR549 was left a trio once again.

"Chris has moved on, he's moved down to Austin, and he's doing his own thing, which is great," says founding member Mead on holiday at his parents' Kansas home. "He's doing a record down in Tucson that I'm anxious to hear."

Having already deliberated seriously about the future of the band after the departures of McDowell and Bennett, BR549 was less conflicted about the decision to continue after the defections of Firebaugh and Scruggs.

"Mark's really great - he sings one of the cuts on the new record, 'You Are the Queen,' which he and I wrote," says Mead. "We wrote that like a week and a half before we went in the studio. It was like, 'Let's do a song for the record,' and that's what we came up with. He's just a great talent. He's...one of the funniest guys I know. He's the Frank Gorshin of hillbilly music."

The other big decision came when the band chose to record the album that ultimately became "Dog Days" outside of their comfortable Nashville environs.

Leaving Music City behind them, the band headed down to Athens, Ga. to record in the home studio of veteran producer John Keane, whose resume includes manning the board for indie roots rock notables like R.E.M., Widespread Panic, Uncle Tupelo and the Vigilantes of Love.

"He's a great guy with a great ear. He got excellent sounds, and it's a really great sounding record," says Mead of Keane and his contributions to "Dog Days."

"We had a lot of fun doing it, just getting out of town to do it. It was kind of a little step aside for him; he's working R.E.M. and all the Widespread Panic records, so he's in a different realm from the kind of stuff we do, and we went there out of our element, too. It all just came together."

The seamless coupling of Keane and BR549 may well stand as one of the few things the band hasn't had to actively work on since their inception over a decade ago.

After the original quintet formed around Mead (who had led the Homestead Grays, a roots rock outfit) and Bennett (the organizer of an informal house band at Robert's Western World, a bar/clothing store in old Nashville's Lower Broadway area) in 1993, christening themselves after the fictional phone number of country comedian Junior Samples' used car salesman in a recurring Hee Haw sketch, the band began building an audience through a long and eventually well-attended residency at Robert's.

One of BR549's early hallmarks was the band's almost inexhaustible supply of country covers. Although the band could rip it up with the best of their alt.-country brethren, it was evident from their thrift store wardrobe and classic country set list that they felt a devout reverence for the genre's past.

The band's knowledge of country's past is the thing of legend. When they were still playing for tips at Robert's, the story is told that new country wunderkind John Michael Montgomery limoed up one evening and told Mead he'd give the band $25 for every Hank Williams song they could play. Undoubtedly, the band could have played all night, but they stopped once they'd siphoned $600 from Montgomery's wallet.

After BR549's regular appearances at Robert's garnered them local raves, it wasn't long before labels started descending on the band. Arista came away with the contract and released BR549's debut EP, "Live at Robert's," in early 1996.

Everyone from the New York Times to Playboy to Rolling Stone hailed the band as one of the freshest and most innovative groups to come out of Nashville in years.

The acclaim from their debut and the band's eponymous follow-up later the same year led to touring opportunities from every musical quarter. The band opened for The Mavericks, Junior Brown and Tim McGraw and Faith Hill on the country side and warmed up rock crowds for the Black Crowes and Bob Dylan.