Lydia Salnikova sings "It's been a long time comin'" on the brand new second disc from Bering Strait.

Truer words may never have been sung given the Russian band's history in stepping up to the plate in the first place. While the band went through six record labels, one apartment fire, a highly supportive manager who almost lost everything for supporting his beloved band and a lot of sitting around and waiting before even releasing their debut, for their second album, "Pages," Bering Strait "only" had to wait 2 1/2 years for its release. 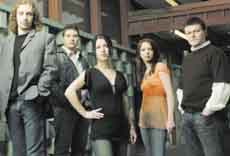 And during that time, group members say the band, which underwent a personnel change, also found their sound.

The self-titled debut did pretty well - selling 150,000 copies - considering the band received practically zero radio airplay. They even captured a Grammy nomination, had a commercially released documentary about them as well as a segment on 60 Minutes.

While publicized initially as a bluegrass band, the sound was far more country pop.

On "Pages," Bering Strait opts for a countrified, rootsier Fleetwood Mac vibe with lots of country instrumentation and bluegrass tossed into the mix.

"We couldn't be traditional if we tried," jokes Salnikova. "We're from Russia."

On the morning of the album's release, Salnikova says in a phone interview from her Nashville home, "Well it's definitely a little bit nerve wracking to put a new baby in the world. You never know how it's going to go because there are so many things that don't depend on you. You're already done. It's out, and face the world, and you hope it's going to find it's place, and people are going to like it. Just the fact to get an album out is a big blessing. You have to be happy at every stage. It's in the stores. You can tell people go to the stores, and pick it up. That's a lot more that you could say a few months ago."

Sasha Ostrovsky, Dobro and pedal steel pedal player, says for him, the album "is still very anticipated. It's been 2 1/2 years since our first record, and we have experimented a lot in between in trying to come up with our sound because we're moving ahead from the first record. We're not the same as we used to be. I think every artist grows to somewhere else after one record is done."

Several differences are apparent. Group members Natasha Borzilova on lead vocals, Alexander Arzamastsev on drums, Sergie "Spooky" Olkhovsky on bass, Salnikova on keyboards and vocals and Ostrovsky wrote 5 of the 11 songs, instead of the 1 they wrote on their own on the debut.

Borzilova and Salnikova share lead vocals this time around. Last time, Borzilova, who has a strong voice, sang most leads.

Sonically, acoustic guitar dominates instead of the electric of the debut. That is partially explained by opting to go with a different producer, Carl Jackson, who won a Grammy a few years ago for a Louvin Brothers tribute disc, and the departure from the band of guitarist Ilya Tolchinsky, who helped on guitar on "Pages," but played a subdued role.

Tolchinsky, who wrote two songs on the debut with non-band members, left because he wanted to produce music. The timing was not good because of concerns within the band about how the label would perceive the departure of a key member, so he held off until earlier this year.

Salnikova is not worried about the impact. While acknowledging Tolchinsky's contributions, she says, "I think the band is as tight as ever and committed, and I think we sound good. I think we're in a good place."

Ostrovsky, 24, says the writing represents "definitely a big change and a big step forward. It means we grew up to be better songwriters."

"When we picked the songs for the second record, the way we did it was just sitting in the room and just listening to a lot of songs, and I mean a lot - like hundreds of them."

"We were picking the songs not knowing who the songwriter was, the publishing company, not even knowing if one of us was the songwriter."

"At some point, we were trying to write all together. Probably we wrote 20 songs within the last year and a half. It was a great experience. We just kind of got closer together as musicians. We've been together for 16, 17 years as a band, but we haven't really written much together, maybe just a few songs that some of us were in the some room writing, but not all of us."

The experience "actually taught a lot of things - how to work together as a band on songwriting."

Salnikova says splitting the vocals "makes it more of a band sound. To me, it's very melodic. It's more us, I would say. The label gave us a little bit of a longer leash on this."

While the process may have had its advantages, it didn't actually result in many songs making the final cut. Only one - the instrumental "What's for Dinner?" - ended up on "Pages."

Ostrovsky says getting through the studio process wasn't easy the second time around. "We pretty much were struggling through a recording process, trying to figure it out. It's hard to come up with something original and be at the same time pretty good. Carl just helped us find that."