Newfield breaks out of the genre box

With the soulfulness of Etta James, the flat-out honky-tonk of Tanya Tucker, the bluesy harp runs of Charlie McCoy and the soaring, gritty vocals of Janis Joplin, Heidi Newfield delivers electrifying songs.

We may not have heard too much from her since her solo debut album in 2008, "What Am I Waiting For," that produced her hit single "Johnny & June," but that doesn't mean she's been quiet or that she's stopped driving down various musical roads. 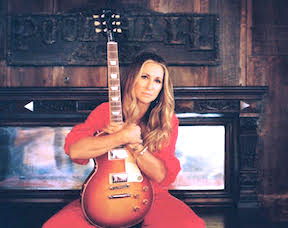 Newfield's been writing; she's been honing her already-smoking harmonica skills — and trading harp runs with the likes of Delbert McClinton — and preparing a new batch of music that showcases what she does best: tear your heart out with a country weeper, burn down the roadhouse with a raucous rocker, close up the honky-tonks with a rockabilly roller and turn the world upside down with a blues moaner.

She's a woman with a vision: a clear-eyed gaze into our hearts and souls and into the depths of the songs in which she dwells. She inhabits her songs, and she turns them inside out with her just-right phrasing and ingenious delivery.

Newfield's new album, "The Barfly Sessions, Vol. 1," demonstrates her creative range, her delight in all kinds of music and her passion for delivering music that's straight from her heart and that reflects her own diverse musical styles. "I wanted to stretch my creative wings," says Newfield. "I know that I wanted to make a record that was extremely different for me. I wanted to make a record that could stretch my vocals and would be considered honky-tonk for mainstream country and mix it up with these other sounds I was attracted to, like the blues."

Newfield is no stranger to the stage, of course. When she was six-years-old, she was belting out Tanya Tucker's "Delta Dawn" in front of a crowd at a big trail ride out in the fields. "After the applause died down," she recalls, "I had found music was for me. It set the foundation for the person I was going to become."

All through high school Newfield sang at rodeos, country fairs and with a couple of local bands that would let her sit in for a couple of sets. Newfield set her sights on Nashville.

"I wish we had been a little more music rich in Sonoma County," she says. So, she moved to Music City in 1989. "All I did was wait tables at that time, and I wasn't singing as much as I needed to," she recalls.

She left, but moved back in 1991 and did some demo work and some writing. By 1996, she and Keith Burns and Ira Dean formed Trick Pony. "The first four-and-a-half years I got the most amazing education," says Newfield. the band had a hit with "Pour Me."

She left Trick Pony 10 years later in 2006 and then two years later recorded her solo debut album with producer Tony Brown behind the boards. In 2013-2014, Trick Pony got together again, but it fizzled.

During the years between her last album and her new one, Newfield has not been sitting still. "I have been storing up songs," she says.

In 2016-2017, she had enough songs gathered that she made it a point to start working this new record. She got Jim "Moose" Brown, who produced Chris Stapleton, to produce "The Barfly Sessions." "He's an extremely diverse player, and he loves authenticity," says Newfield.

For the new album, Newfield also gathered a number of guests: Jim Lauderdale, Randy Houser, Kenny Vaughan, Waylon Payne, Mickey Raphael and McClinton. "There are five songs on this record that were written between 2007-2011," Newfield says. "They were kind of 'saved' for a project like this to come along. They didn't quite fit any particular vibe on former records of mine, but I knew eventually they would."

"The Barfly Sessions" kicks off with the propulsive, jet-fueled rocker "I Won't Wait Around." In some ways it might be the theme of the album: the singer's moving on with her mission of making smoking hot music and not waiting around for anyone to give their stamp of approval.

Newfield says, "We kicked this record off with 'I Won't Wait Around' because of its unique high energy and slap you in the face big sound. I absolutely love the melody on the bridge too; it's like taking a journey back to the '60s."

"I wrote 'I Won't Wait Around,' 'Whiskey Town' and 'I Could Fall 4 U' with two of my favorite people and writers, Leslie Satcher and Al Anderson, in one day," says Newfield. "Three totally different kind of songs...and that's how it usually is with us. We write fast and hard. Al is such a master of the guitar, and he is one groovy dude, so as long as Leslie and I show up with some good ideas and ammo...the rest just flows."

"'I Could Fall For You' is one of my favorite songs on this record," says Newfield. "It's straight out of the Buck Owens and Don Rich playbook or early George Jones. My father's side of the family hails from Bakersfield, Cal., and I grew up spending time there and loving those records and that distinct twang, Telecaster sound, and harmony, which Jim Lauderdale was born to sing and play as well, so he was the perfect harmony partner for this swooping rangy traditional song."

She can turn it down several notches to the slow-burning ballad. You can feel the ache in the chorus of "Three Things."

"It's extremely honest and a bit edgy," she says. "It moans and whispers, and screams out with both strength and vulnerability. My kind of song."

"Blues is My Business," she recalls, was "an anthem. I thought 'this needs a guy like Delbert on it to give it even more grit'; sure enough, we sent it to him, and he jumped in right away. He blew a little harp with me on this track and sang with the power and honesty that makes him the icon he is."

With "The Barfly Sessions," Newfield is bringing the house down, delivering a set of songs that moves our bodies and souls. As she says, "I'm breaking out of any kind of genre 'box' with this one. To me, it's simply about playing good music with no labels or titles attached."