Sierra Hull would be the first to tell you that releasing a new CD in the teeth of a global pandemic is a challenge. "It's very strange...just adjusting to being home and knowing what that feels like. It's the most I've been home since I was a kid. I left home when I was 17, you know, to go to Berklee College of Music, and I've done a lot of traveling ever since. So, it's the longest stretch sleeping in my own bed I think I've ever had." 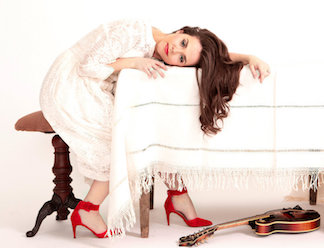 Hull's new release, "25 Trips," presciently takes on the concept of time in its collection. Hull addresses the passage of time, living in the moment and looking back to other time threads. "25 Trips" refers to her age, and the number of trips around the sun she has travelled.

Bluegrass music is travelers' music, at its core. Bluegrass is the story of journeys, large and small, across distance, memory or space. "The music for me on this record," she explains, "feels maybe even more relevant now than when I wrote it. It's funny how those melodies and lyrics and things can sort of change meaning in perspective."

Hull's previous release, "Weighted Mind," came out in early 2016, so "25 Trips" gestated for four years. "I think it really started coming together a couple of years before it actually came out. There's always a period of really touring that record and maybe writing some songs and between all the busy touring and stuff like that and then, you know, trying to just sort of figure out what's next. At least for me, that's always come a little bit later."

"Right after 'Weighted Mind' came out, I wouldn't have been able to tell you this is the record I would have made...at the time. But I think after touring 'Weighted Mind' for a couple of years and doing that more of a stripped down fashion because that record was mostly mandolin and voice, so it's very sparse. I knew I wanted to bring back in more instrumentation, and I wanted to be able to use the studio in a slightly different way than I had before."

The resulting work is a layered, textured sound palette. Hull explained her approach as one of "stretching the sonic boundaries a little bit for me from what I had done in the past and playing with multiple things on the record. So, you know, harmonies backing lead vocals; being able to go in and play several instruments: octave mandola, electric mandolin and electric guitar."

This is an artist confident in her work and stretching the boundaries, without over-production.

To be sure, "25 Trips" is not a Stanley or Monroe record, but it builds upon what the Osborne Brothers were about when they introduced a more lively sound and instrumentation into bluegrass music 60 years ago.

The question, then, is how a modern artist resists the technological temptation available in digital music production. Hull has a straightforward answer. "I don't think you always resist in the moment. I think sometimes you actually do in making decisions and then going back and changing stuff later. That happens where you know obviously there's certain things that you can really know from basically from having the bare bones of the song. You say, 'Okay this is what this needs to be. Let's do exactly that'. And sometimes, the song will just become what it needs to become on its own."

Hull offered an example: "Father Time" from "25 Trips." "Originally back when we started, it was even more bare bones, and we just decided we wanted to add a couple more things So I think I added acoustic guitar to the track near the very end because we just felt like it needed to be a little warmer in spots and have something a little different than the octave mandola in texture. But to start with it was literally just octave mandola in playing the main parts and having a little in cello play the strings parts. And so then you go from that to just kind of layering some things."

"Say a track like 'Poison.' For the most part, the bare bones of the songs come together because you actually have a band in the room, and you were playing all together at once, and you know things just start to come together and tell you what they need to be."

"And sometimes you not put on something and go 'you know what, maybe the string parts are too busy there. Maybe we actually don't need those'. So, you can kind of peel away some of the layers after the fact...technology can be conserved, and now it's just it's so much easier now to put stuff in to take stuff out and test different ideas without being totally committed to it."

"I kind of wanted to lean into that with this record and be able to have more opportunity to play around with those ideas and try things than I have on some of my previous albums so it was a lot of fun getting to sort of at least have some of the record be that approach... So there's kind of a wide variety of the way we approached recording this record and building the songs."

Having such a fulsome work in public without being able to tour behind it, at least for now, creates a special dilemma. Hull says, "I love going live. I mean, the excitement of being able to have new music as a touring musician... There's nothing like new music to fuel you to give you energy to go out. Being able to have like a fresh batch of songs that you've really worked on and are excited to play live. I felt like the guys that were touring with me, we were just starting to really get in the music and feel like we were playing it like a band. It's like you really get into a groove where it suddenly becomes really fun."

"We had a few shows under our belt (before social distancing) already, and we're just starting to really get into it."

"I think the thing that keeps me from being kind of heartbroken over it it's just everybody is in this situation. It's not like I broke my arm, and I can't go out and tour. It's you know every single person I know, every single musician I know is sitting at home right now. Many of us are experiencing that sort of you know devastating feeling of not being able to go out and do what we love. Hopefully this isn't something that will happen again any time soon.. So I'm embracing it."