Wayne Hancock exhibits his well-defined self-deprecation while describing the nature of his vinyl/digital only release, "Man of the Road."

"Yeah, greatest hits," he says with a raspy chortle, the sound that every smoke-filled, whiskey-soaked roadhouse he's ever loaded into would make if it could laugh. 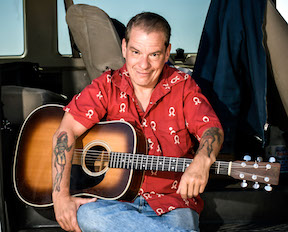 Perhaps "retrospective" is a better label to paste on the album's shrinkwrap, given that Hancock has never actually notched something that would qualify as a certifiable hit, at least by the narrow yardstick the music industry uses to measure such releases. And that is, in fact, just fine with him. He'll be the first to tell you that he didn't get into the music racket to have a swimming pool shaped like a mudflap girl installed behind his 30-room Texas mansion. Wayne Hancock has only ever wanted to play good music to people who like it.

"I'm just trying to keep the ticket prices at a reasonable level so working people can afford to see the show and I can afford the best players I can find,and live comfortably myself," says Hancock. "I'm not looking for tour buses or airplanes or any of that. That's out of the question. I'm just trying to keep it simple and hopefully, in 20 or 30 years when I cash in my chips and go uptown, that nobody will be saddled with a bunch of bills trying to put me in the ground. There's no retirement here. I'd go bonkers if I had to retire."

Mission accomplished. Ask any one of Hancock's legion of fans who routinely turn out to attend one of his 100-plus shows every year, and they'll tell you their truth: Even if it never comes close to a sales chart, every song on every Wayne Hancock album has been a hit. He is equally humble when he's complimented on how great the 10 songs on "Man of the Road," recorded at various times for various albums, hang together as a set.

"I like them too," he understates. "I go back and listen to them, and I'm not embarrassed by anything I hear, so that's a good thing."

Hancock actually did listen back to the songs on "Man on the Road" because he had very little involvement in its creation. The album was assembled by the able hands at his longtime label, Bloodshot Records. They proposed the idea of a vinyl/digital look back at his 18-year association with the Chicago label as part of the label's 25th anniversary celebration, so Hancock left them with the task of sifting through his Bloodshot catalog for the right tracks.

"There were a couple of places where I chose one over another," says Hancock. "They were trying to get ahold of Hank III to use his version of 'Juke Joint Jumpin'," but they couldn't so I told them to use another song."

The album's title cut comes from 2001's "A-Town Blues," the version of "Thunderstorms & Neon Signs," originally the title track of Hancock's 1995 debut album, was featured on 2003's "Swing Time," and Hancock's smoking take on Wanda Jackson's "Let's Have a Party" was pulled from Bloodshot's 2004 tribute set "Hard-Headed Woman: A Celebration of Wanda Jackson." And a side note to collectors: "Man of the Road" represents the first time any of these songs have appeared on vinyl.

Hancock clearly put a lot of trust in Bloodshot for this release, but that trust has marked his relationship with his label from the outset. When he began his search for a new label nearly two decades ago, he wasn't necessarily trying to check a lot of boxes on a long list of requirements. When he approached Bloodshot, the label had only been in existence for seven years, forming in the same general time as Hancock's 1995 debut album for the ill-fated Dejadisc.

"All I was looking for was a label that could put my records out. The people who buy them tells you the success of the label, and I liked Bloodshot," says Hancock. "I think what originally drew me to them was that I liked them. I sat down and talked with Rob (Miller) over some period of time, and they knew how to talk the talk, and I asked if they could walk the walk, and they said they could. I asked Rob here within the last year, 'Hey, you guys still want me on your label, right? I've been there a long time.' And he said, 'We surely do.' That's a good thing. As long as Bloodshot's around and they'll have me, I'll be there for them."

"Man of the Road" also serves as a stopgap release while Hancock works on new music, the follow-up to 2016's excellent "Slingin' Rhythm" which he hopes to release later this year. He's established a concept for the album and is well into the process, but he still has some material he'd like to flesh out, if possible with a particular old friend.

"I've got another good road-themed album coming out, but I need to write a few more songs," says Hancock. "I've been trying to get Dale Watson to do some writing with me, but he's a pretty busy guy with lots of irons in the fire. I'd like to have Dale do a cover of a truck driving song or maybe have him write one with me. I am going to get a record out this year. Is Dale going to be on it? Who knows? He's either fixin' to get married or they just got married. She's awful pretty; I wonder if she's got any sisters?"

Perhaps the biggest headline in the nearly four years since "Slingin' Rhythm" is that Hancock has gotten sober, with higher power assistance and the love and support of the motorcycle club he's joined. Hancock gives the club, which he refers to as family, a good deal of the credit for his sobriety, but he hesitates to elaborate on the club itself due to the unfortunate stigma attached to such organizations.

"It was one of those things where you're like, 'How many times am I going to do this before I finally get it?'" says Hancock. "I love my club life. It's made a great big difference to me. Those guys helped me get off alcohol. In May, it'll be three years. I haven't touched it. God's behind all that too, but (the club) gave me a reason. Like they say, 'You can't ride your motorcycle in jail.' At holidays, you're invited to party with your family. In turn, when I go back out on the road, I'm energized. I'm not coming out of a depression or fighting alcoholism. Now I have a nice even balance. And when I'm on my bike and I'm by myself, I can think and I start coming up with good songs."