With "Headlights," Della Mae turns it up

Ten years on, Della Mae has covered a lot of ground in the world of bluegrass, and the band is meeting the challenges of building a sustaining, long-term career with its latest release "Headlights."

The new record displays features of new and old. Kimber Ludiker, fiddle player and founding member of the band, along with co-Dellas Celia Woodsmith (lead vocals) and Jenny Lynn Gardner (mandolin), explains, "It's been a long time coming. You kind of get in the zone of making the recording, and you're excited about it, but you wonder how you know how the world's going to receive it so ... people enjoy it so far which means a lot to us." 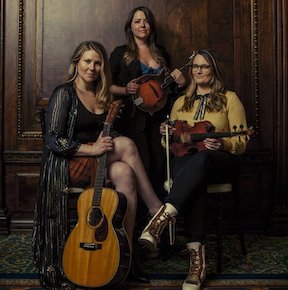 "Headlights" has a rich, strong perspective. Della Mae has always been a solid bluegrass band, but with experience and wisdom, a distinct female point of view is evident on "Headlight," even more so than in their earlier work.

Ludiker is self-effacing when saying that Della Mae is "nine years into our five-year plan." In fact, they have accomplished a lot in their career (since 2010), but are now addressing the skills and drive necessary to keep a career going for "The Long Run" (a cut from "Headlights"). In spite of Grammy nominations and IBMA Awards, making a living these days depends on hitting the road and sticking with it. It's not easy being a musician so why not just come out and say it every once in a while?

"'The Long Game,' this is something that's been on our minds. That whole song started out like I'm always joking about you know when you're young, and you have all these dreams, and you realize that you know everything you thought you'd accomplish in such a short time. It really takes longer...People discover new bands when many times they have actually been playing together for like 10 years "

"The songs in this album are so profound," Ludiker says. "It's the most personal music that we've ever released. It really...captures that nearly every aspect of our lives you know so there's like loyalty, and you know working on stuff together; the long game and sexual abuse and 'Headlight' (about challenges facing women of all ages). We're just standing up for women and the courage it takes to speak really."

"Headlights" will likely gain attention for its working woman's approach to life in the 2020's. The title cut is a bluegrass anthem to the nonsense that women are expected to tolerate in an historically male hierarchy.

Most wrenching, perhaps, is Woodsmith's "Waiting For You," a bold and stark statement of the challenges of fertility. It's hard to imagine the Dellas performing this song in concert, given its personal and intimate emotions. Ludiker says they have tried it out live a few times with expected results. "It's hard. I honestly don't really know how much we will be able to play it. It's something very personal to Celia she's you know tried for a really long time to get pregnant, and nobody sings about it...something and no one ever talks about, and she wrote it. When she played it for us the first time we were just all in tears it's so intense."

"It's an important part of our mental health to be able to play songs like that, and you know knowing however hard something it's for us it's reaching all of these people that like there's no song for them, and now there is."

"Celia and I've developed a strong friendship over the years, and you know we've had a few lineup changes here and there, but we know that's what it takes to keep the band going," says Ludiker. The third Della, Gardner, is a gifted mandolin player. The interplay between Gardner's mandolin and Ludiker's fiddle through the "Headlights" CD shows a remarkable comfort level between them.

"Headlights" features three Ludiker-written tunes (one a co-write with Jon Weisberger and Mark Erelli) and Woodsmith's strong writing. There's also a soulful collaboration with the McCrary Sisters on three tracks, which lends a new dimension to Woodsmith's already smoky, punchy singing and opens a door toward a bigger-than-bluegrass sound.

" We collaborated with (The McCrary Sisters) several years ago in Scotland," Ludiker says. "We were playing this festival called Southern Fried, and a part of our festival hiring that was to be like the host band of the Dolly Parton tribute that had all the artists singing Dolly Parton songs The McCrary Sisters were there and became really good friends. When we were thinking about, you know, the song spirit they just came to mind. We thought that it would be really cool to have a soul infusion especially in 'It's About Time.' It just felt like it needed that kind of soul vibe... they came in, and it was so much fun."