The Mavericks "Play the Hits"

When recording its album "Play the Hits," The Mavericks approached this covers album in much the same way the band creates any of its other studio albums. "Above all, we're always trying to reach a certain musical bar that we are trying to get to, no matter what it is we do," notes guitarist Eddie Perez. 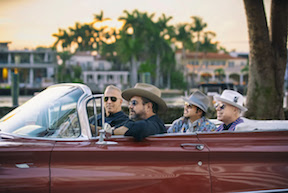 "We've been called a 'genre defying' band in the past," he continues, "but the truth is, we're just a bunch of guys that are following our creative heart. So, in the process of approaching this record, it was really one of those things that blossomed really quickly. It wasn't something we thought too much about, other than the fact that for a while we've been thinking, 'Yeah, it would be nice to do a record of cover tunes that mean something to us.'"

It's readily apparent that the "mean something to us" concept was (and is) more important than recording actual big chart hit songs. Sure, all these tracks were also chart hits, but they weren't just the biggest commercial hits. Rather, they are songs both wonderful and also popular. Whether it's John Anderson's "Swingin'," with all its delightful everyday details about cutting chicken to fry or rolling up a garden hose, (all describing other concurrent motions) or Willie Nelson's "Blue Eyes Crying in the Rain" and its simultaneous water sources, these are all songs the leave an immediate and lasting impression upon listeners. All these songs left an indelible mark on The Mavericks.

If you're expecting hear faithful versions of these popular recordings, you best move along, though. "In a way, we always seem to make them our own," says Perez, "at least how we hear the songs. Some of these songs are departures from the originals as we knew them. But that's the whole point of what the record is. We're not saying we're copying them; we're just saying these are the things that inspired us to be creative and think outside of what has already existed – within the context of paying tribute. I see it as, not just a tribute to the songs that inspired us, but also as a tribute to ourselves and the journey that we've taken, now being a band for 30 years."

The Mavericks - Are You Sure Sure Hank Done It This Way?

The Mavericks has been described as a band that combines Tex-Mex, neotraditional country, as well as Latin and rockabilly influences. Which is all to say, The Mavericks don't – and never will – fit into anybody's nice, neat stylistic categorization. Therefore, if any band's music fits its group name, it's The Mavericks.

Although the band doesn't ever stick to any 'only straight country sounds' rules, the act always plays a wide variety of styles especially well. Whatever these guys do, though, they never sound like they're kowtowing to contemporary country music trends. Instead, The Mavericks sometimes sound like a group that exists in its own private musical universe.

The band covers Bruce Springsteen's "Hungry Heart," which - at the time of its release from "The River" album - was considered one of the weaker, less substantial Boss songs.

"Bruce Springsteen music has always had a quality of being 'for the working man,'" Perez explains. "And, right off the bat, coming from the backgrounds that we come from, we can certainly identify - certainly Raul (Malo) identifies. And Raul just had a feeling for this song, and he had an idea and a groove and an inspiration all his own that he wanted to bring to it. And above all, that was one of his favorite tracks that Bruce has ever done."

"Also, when we play it live, it's such a sing-along. It seems there's not anybody that doesn't know that song. For us, being primarily a live act, that's what goes into the planning when you're imagining a record, and you're imagining a tour behind a record. You're imagining the show. You're imagining moments you can create for people that might be moments where people might feel inclined to be involved. You can take a number of tracks from Bruce's from any given period, and his music just embodies you wanting to put your fists up in the air and sing right with him. And that's the inspiration behind choosing that track."

There's a bit of irony in the fact that The Mavericks cover Waylon Jennings' "Are You Sure Hank Done It This Way," arranged in a way one can be sure Hank didn't (and wouldn't) to it. "We felt that nobody had really covered that song," Perez explains, "so we just started getting together and jamming stumbled upon a way to do it that was somewhat unique and fresh. The tongue-in-cheek is always present in that we do as The Mavericks."

Some of these songs took on lives of their own, if you will, right there in the studio. "One of my most favorite," Perez recalls, "Is when we covered the old Hank Cochran song, 'Why Can't She Be You.' It was an idea Raul had, and he started playing it and we just kind of launched into it and fell into it as a band. As we were listening back to it, our good buddy and longtime harmonica player to Willie Nelson, Mickey Raphael, just happened to be coming into the studio that day for a session in another part of the studio. We were, like, 'Hey, we just did this track. Can you do something on it?' So, it was one of those moments of spontaneity."