Eleven years ago, Kelly stepped away from music. She had just finished touring on 2007's exquisite "Translated From Love" and felt the angst of being a travelling musician with family at home. At that point, Willis and her husband, musician/producer Bruce Robison, had welcomed four children into their family in the space of five years, and she felt it was time to prioritize her husband and kids and step away from her career. 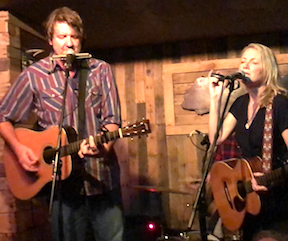 Just after the release of Willis' fifth full length studio set, 2002's "Easy," she and Robison collaborated on their first album together, 2003's obviously themed "Happy Holidays." Five years after announcing her hiatus from music, Robison convinced Willis to make another album together, resulting in 2013's well-received "Cheater's Game," followed by some limited touring and then their third set as a duo, 2014's "Our Year Together."

Five years after the brief respite from her hiatus, Willis returned with her seventh full length release, last year's Americanapolitan groovefest "Back Being Blue," produced by Robison, which she followed up with a UK tour and scattered dates in her home state of Texas, on the east coast and in the midwest. And now, just a year later, she and Robison have produced another stellar addition to their duo canon with "Beautiful Lie," and another round of similarly geographical stage stops. This recent flurry of recording and gigging begs the question: Why is this the right moment for Willis to get back to the literal and figurative spotlight?

"I don't know, exactly," says Willis with a laugh from her Austin home. "The solo record was just a long time coming. It was always on the back burner; 'Yeah, I'm going to make new record soon. Soon. Soon.' It was finally just time. The main thing was my kids were older, and I had some breathing room again, and I was able to have creative time, where my downtime wasn't filled with desperately trying to get some sleep or grocery shopping or something mundane like that. Now it's like I'm back in the game in a way where I can devote time and energy to it. Once I made that record, Bruce was really ready to make another record with us, and whenever he and I make records together, he drives that process. He made it happen really fast after 'Back Being Blue' came out."

Willis recognizes that the work she's done with Robison bears a certain resemblance to their individual recordings, but she's also acutely aware of the unique characteristics of their collaborations. "Beautiful Lie" is yet another potent example of their incredible chemistry as a personal and professional couple.

"They're similar to what we do separately, and I think that's why we're complementary to one another," says Willis. "We might start off working on a song together, and we'll have very different instincts and kind of resist what the other is suggesting. Ultimately, we end up with something that I think is interesting and better than it would have been if one of us had just done the stock thing we would have done with it. We come at country music from two different places. I started in that kind of '60s rockabilly world, and he started in that '70s outlaw/singer/songwriter world, so in general, he wants the song to be slower, and I want it to be faster. That's were we start with our issues and we go from there."

The process of making "Beautiful Lie," which features a wonderful cover portrait of Willis and Robison by Mekons front man and graphic artist extraordinaire Jon Langford, began with the pair recording the song "If I Had a Rose" for Robison's studio project "The Next Waltz." Robison will pair up an artist with a great song in his home studio, which he's dubbed The Bunker, film the behind-the-scenes process and then release the result as a single and accompanying video. Robison and Willis were so taken with the result of their fresh collaboration that they rolled with the momentum.

"We were so happy with how it sounded and so excited about it, we just decided, 'Let's make a whole record,'" says Willis. "It had been a long time since we did anything like that together. That song was the song everything had to go around or work with or be as good as. We collected a few songs here and there, and like we always do, we each try singing the lead and the other the harmony, and we switch keys around to see what happens and hope we stumble on something that has a magical spark about it."

From the beginning, Willis and Robison have been aware of the pitfalls of working and living together. Willis' first husband, Mas Palermo, was also her drummer so she had already experienced the totality of working with a romantic partner ("I used to joke that the only thing I did without him was dream..."), and as a result, she and Robison have learned something new about their collaborative process with each new project.

"We're always growing and figuring out how to work together," says Willis. "I resisted it forever because I thought it was going to be a marriage-ender, but it actually had the opposite effect; it's been a really positive thing for our relationship that we both feel great about, and it's so much fun. But over the years, we've really had to figure out how to balance the power, We have different ways of being a bandleader and sharing the stage. It can be bumpy, but it's always a work in progress."

The key to Willis and Robison's separate and collective successes seems to be their ability to compartmentalize their personal and professional lives in the studio and on stage to reduce the chances of one leaking over into the other.

"Bruce and I have figured our boundaries, and we do get to go off and do our solo stuff. And we draw the boundaries in our gigs that we do together, and we have the jobs that each one does," says Willis. "And I draw the line; 'You can't look at me every time we do 'Desperately.' You cannot put a shtick in the show about how much you love me, that's just crossing the line.' We can't make our relationship show biz, and that's hard. I don't want to be selling a happy marriage to people because then it becomes fake. We're actually just making music together, and it's still a little dangerous to me."

Those issues can come to the forefront when they're in the studio, but Willis definitively cites Robison as one of the best producers she's ever worked with, and she trusts his instincts inherently.

"When we get in the studio, he's a force," says Willis. "He's the person everyone looks to for 'Is that good? Should we go in this direction?' Otherwise it just feels like a rudderless ship. He's really got it going on in the studio. He's unique in that way. I've worked with a billion people, and it's very exciting when everybody feels like, 'This is going to be fun, this is going to work.' But that can be a problem for Bruce and I and our power struggle. I feel like I have to come in very protective of my ideas and fight for them so they don't get swallowed up."

And that's a tricky proposition when your producer is also your duo partner, who now has two votes in the process.

"That's right. And that can really piss me off sometimes," Willis says with a laugh. "I have to make sure I'm not walking around with a scowl on my face."