A visit with Hayes Carll finds him taking a rare day off at home, he and girlfriend, Allison Moorer split time between homes in New York City and Nashville, to discuss new album "What It Is." 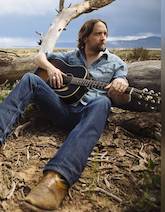 "This album works around three themes; our relationship (he and Moorer), the world and myself. I try to make the best read I can and tell the story. I am fortunate to at a stage in life to have what I have and be with who I am with and I am doing my best to be present in the relationship. I want to pay attention and be in the moment."

Moorer co-produced the disc with Brad Jones. Asked if the final cut, "I Will Stay" alludes to this, Carll admits, "Yes it does. I wanted to show commitment."

The first single, "None'Ya", a beautiful tune of earnest commitment to a relationship, co-written with Moorer (providing harmony), and Adam Joseph Landry reached number one on Billboard Americana and the Texas Music singles charts. The opening lines, "I asked you where you been and you said none'ya, none'ya business, don't you ask no more. If you would do a better job of listenin' maybe you would understand, why I'm at the door" set the tone for the album.

Carll writes or co-writes all 12 songs, six with Moorer, and each, while varying in production and style, showcase his turn of a phrase, intricate poetic simplicity and fearlessness to tackle topics many acts today might shy away from.

Carll grapples to understand today's political climate on the high energy "Times Like These." "I find it frustrating, I believe that we have more in common than what separates us. I still want to love and help my neighbor, even though we may not think the same way about some things, we still want to work, love our families and help each other."

This frustration is illustrated quite well with the lines, "(In times like these,) do I really need a billionaire, just taking up my time tryin' to tell how he's treated unfair?"

Scoffing at the idea that broaching these subjects is brave, Carll has faith in his audience and serves up his take with gusto. "It's not brave, it's my job."

Recorded in Nashville with session musicians and backing vocals by Moorer and Bobby Bare, Jr., "Things You Don't Wanna Know" takes a Memphis sound (think Booker T and the MG's.) With lines like "Nobody wants to hear the truth, no, they only want to see the show; and maybe you should stop asking about things you don't really wanna know," it speaks intimately of the breakdown of a relationship and society in general as we retreat into our own cocoons.

Asked about the change in "groove" the song delivers, Carll says, "I tell the story, and I let Allison and Brad pick the instruments that best compliment the lyrics, and they get the right sound in the right place. I'm fortunate to have Allison who has a genius for adding instruments where they contribute to the song in the best way."

"If I May Be So Bold" is very akin to Johnny Cash's "Man In Black," with Carll pledging to be bold in his writing. "Bold enough to make a difference, bold enough to show I care, bold enough to keep on trying, even when the will's not there." Carll adds that the Cash connection was "mindful both sonically and in the content. It is an honor to be compared to him."

"Jesus and Elvis," co-written with Moorer and Nashville Songwriting Hall-of-Famer, Matraca Berg ("The Wrong Side of Memphis," "Strawberry Wine") sticks with you. A true story, as Carll relates, "a lady built a bar and had it decorated for Christmas in 1967 as her son shipped out for Vietnam on Christmas Eve. She vowed to keep the decorations up until he came home and he never did, so now the bar is still decorated with Christmas lights and velvet Elvis pictures, even the jukebox tunes were never changed. She kept the bar filled with everything that he loved. It was a story that I wanted to tell."

One might assume that the cut "American Dreams" stemmed from a series of road trips over the course of a relationship, and one would be wrong. Co-written by Carll and Moorer, he describes it as a "series of actual dreams that the pair had and began sharing that evolved into a song over time. We just started talking about some dreams that we were having, and they turned into lyrics."

What results is a travelogue of America from the Rockies to the Delta and everything in between, even the late actor Harry Dean Stanton is name-checked along with Paris, Texas, which coincidentally or not, was the name of a movie that was one of the character actor's few starring roles.

A love song wrapped up in a boogie beat, "Beautiful Thing" is a whirlwind from meeting to marriage in 3:19. Co-written by Carll and Moorer and mirroring their meeting and relationship, with a small amount of artistic license, Carll attributes this song as a "celebration." When asked that it might be sad if they didn't make it, he added, "Oh no, they get married at the end. Happily ever after."

Known better for her alt rock background, LOLO is an unlikely co-writer on the song "Fragile Men" which could easily be mistaken for a #MeToo anthem. However, as noted by Carll, while the song title stemmed from an offhand comment by LOLO during a writing session, the song is truly a personal reaction to the neo-Nazi marches and violence in Charlottesville in 2018.

Once this point becomes clear, the song, produced as a tango and the shortest song on the album at 2:39, is a narrative directed at the white supremacists whose violence resulted in the death of a female counter protester. While the chorus lyric "The whole world is exploding and I know it feels so strange, it must make you so damn angry, they're expecting you to change" encompasses the frustration that those with this point of view must be confronting in the modern world, it is the final line that may best describe the misplaced angst these folks must feel every day. "Fragile men, they're debating all your history, unraveling all the mystery, and that just isn't fair."

Again, Carll, sees writing songs like this as his job, "I don't think it is brave at all, when I saw all those young men marching with torches and chanting. I couldn't just let that go." When asked about acts that might not approach the topic, he stated that "How could I not respond. This is something that I'm not okay with."

"My fans know me and if anyone thinks that stuff is okay, then they won't be missed at my shows. I don't want them there."

A tongue in cheek co-write with Landry, "Wild Pointy Finger" has a late-Sixties, Van Morrison feel. "I wrote this song about how we blame all of our problems on someone else or some other group right now;" says Carll, known for his sense of humor. "We were having a little bit of fun but I try not to do it as much anymore. But I've been guilty of it too at times in the past. I'm trying to grow and get better, and I think we all should."