Those aware of the late Owsley "Bear" Stanley likely know him for one of two reasons – his pioneering work manufacturing lysergic acid diethylamide (LSD) in San Francisco during the mid-to-late 1960s and his role as an innovative sound engineer. Most notably, Bear worked with the Grateful Dead from 1965 through 1975 and in that role, he was the driving force behind the greatest concert sound system ever conceived – The Wall of Sound – which was used by the band throughout 1974 before being retired while the band was on hiatus from touring in 1975. 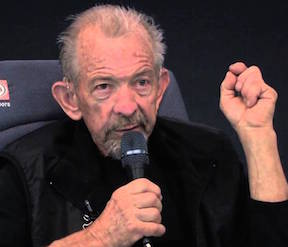 What the average music fan may not be aware of is Stanley's lifelong commitment to continual audio improvement and the existence of his Sonic Journals, the reels of tape he created while experimenting with audio recording techniques during performances by a large variety of bands and artists, including Doc and Merle Watson, from roughly 1966 through 1983.

While certainly not the only person making audio recordings of live music performances in the Bay Area during the countercultural revolution in the '60s, Stanley was definitely the most revered, earning a well-deserved reputation for his ability to capture the essence of a performance.

The secret to his success was microphone placement and his desire to keep experimenting with both setup and equipment until he got it right. Starfinder Stanley, Bear's son and president of the Owsley Stanley Foundation, explains, "Part of the genius of what Bear did was to figure out how to produce the sound in a way that did not create that distortion and allowed also the sense of the room. So when he miked a room, and he miked it again trying to capture how the audience was experiencing the show, not only are you getting crystal clear sound, but you're also capturing the reverberation that gives you a sense of the sound of the room."

Starfinder also talked about how Bear's approach to recording live performances mirrored the social structure of that scene, "It was about every aspect of making music. They had some heady ideas, and it was all about experimentation and improvisation and it was not just with music, with everything. It was their entire social setup, the counter culture with psychedelics and expanding their minds and with rejecting the cultural mores as far as almost every element of how they lived their lives and trying to create something better."

"That's the one thing I always come back to with Bear, he wanted to make things as good as they could be and it was always a quest for how do we do this better, how do we improve it and how do we have fun while doing it."

Thanks to his association with the Grateful Dead, Bear had access to many of the artists and bands performing there. Starfinder says, "He would set up the sound system, and a lot of bands didn't have soundmen or their own sound systems. When bands would open for the Dead, if they didn't have a soundman, he'd run the sound."

"He typically recorded everything, and if he liked the band, he'd keep the tapes and if he didn't like the band, he would record over them sometimes. Tapes were expensive, and it was all out of pocket. He didn't save every tape of every show he made sound on, but he saved a lot of them. We have about 1,300 reels all totaled."

With the intention of advancing Bear's concepts and perpetuating his life's work, including the digital preservation of his vault of Sonic Journals currently stored on tape, Stanley's family created the Owsley Stanley Foundation in 2011, following his untimely death in a car accident in Australia where he lived.

Starfinder and the Stanley family were completing the work Bear envisioned. Starfinder says, "The tapes were getting older, and they physically deteriorate over time and eventually the little magnetic particles fall off the tape and the music's gone. So he knew there was a clock ticking. And we talked about it, and he thought that he would be able to get to it and he expected to live a long long time, but he did say that if didn't manage to get it done, he expected I would deal with it in the way that he would've – to his specifications and to the quality that he would expect."

"So when he did die, we realized that the only way we were going to be able to do it in enough time to save the tapes before they fall apart was to start a 501(c)(3) and raise money from the community in order to preserve the tapes."

In order to showcase the quality of the material in these vaults and to help fund future preservation efforts, the Owsley Stanley Foundation just issued "Never The Same Way Once: Live at the Boarding House, May 1974," a 7-CD box set capturing 4 nights of performances by Doc and Merle Watson at the Boarding House in San Francisco in May 1974.

At first glance, recordings from these giants of bluegrass and folk music may seem like an odd choice to introduce the world to the Sonic Journals of a man known best for recording the jammed-out psychedelic rock music of the Grateful Dead, but another Jerry Garcia-related project holds the answers.