For most artists, eight years is a fair amount of time in their careers. For Nikki Lane, eight years represents the entirety of her recorded history, and she's filled that relatively short time span with a highlight reel of impressive accomplishments, not the least of which would be actually learning how to write and play music and including her most recent and best album to date, "Highway Queen."

The Greenville, S.C. native was raised on country and Motown, but turned her teenage attention to punk and alternative rock. A high school dropout, Lane moved to Los Angeles where a series of nothing jobs led to an opportunity to design her own shoe line; she currently runs a vintage clothing boutique in Nashville called High Class Hillbilly. 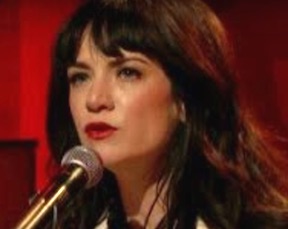 Five years later, she gave the guitar a try, learned how to play and write, but after a few open mic shows, she relocated to New York for a corporate position. Lane's then-boyfriend broke up with her to pursue his recording career. So, she quit her job and channeled the heartbreak of their failed relationship into a set of you-done-me-wrong songs that became her Nashville-recorded, self-released 2009 debut, "No Room for Cowboys."

Lane returned to New York and signed with IAMSOUND, who connected her with renowned producer Dave Cobb for her astonishing 2011 sophomore album, "Walk of Shame." After garnering great notices for the album and gaining a reputation as a fearless performer, Lane scored a contract with New West and hit the studio with another big name producer, the Black Keys' Dan Auerbach, resulting in 2014's almost universally praised "All or Nothin'."

And here's where a story filled with interesting turns offers more twists than a bag of pretzels. With the successes of "Walk of Shame" and "All or Nothin'," Lane's profile rose to the extent that more and more journalists wanted to hear her tale, but to her chagrin, the interviews were dominated by her producers' star power.

"A lot of conversations would start with that, and if it made it onto my contributions to the record by the end of the interview, it would almost be alarming because they were so fixated on who made it," says Lane. "I'm aware of how much they helped me, and I'm really grateful I had the opportunity to have somebody that could help so much with opening the doors, but I was tired of talking about other people."

Given Lane's perspective on her previous two recordings, it may have seemed an odd choice for her to once again turn to a name producer, Jonathan Wilson, for what would become "Highway Queen." Although she had specific goals in mind, she allowed the process to play out much as it had with Cobb and Auerbach, and unfortunately, the third time was not the charm.

"I didn't really have the vocabulary in the studio the first couple of times to offer up any constructive criticism or direction," says Lane. "I was kind of relying on the fact that I picked a producer, we went in, the producer gave me a record, and I loved it and worked it. I went in with that same kind of attitude, but the one thing that was really different was that I was deep on tour and only had a few days off. We were using that time to make an album, and I really should have been using that time to catch up on sleep."

Lane was road weary and disinclined to expend energy on studio conflicts or batting around ideas and allowed the album to develop without much input on her end. On "All or Nothin'," she and Auerbach had collaborated on a studio sound that had to be reconfigured for its stage presentation. After the relentless tour schedule for "All or Nothin'," Lane had found the live sound she wanted to translate on her next record, and that sound was not evident in Wilson's sessions.

"I thought the sound was going to be depicted on the next record, and after the first pass at it, it really wasn't," says Lane. "Jonathan Wilson is an incredible producer, and it was a really positive experience, but it was a costly experience that didn't get me anywhere. Even though I knew what I wanted the songs to sound like because we'd been touring them, I let somebody else dial in the sound for the future. I had to step back and start from scratch."

Sufficiently humbled by the process, Lane told her label and team that she needed to begin again, and found everyone incredibly supportive. She had begun dating Jonathan Tyler, an artist and producer in his own right, and he invited Lane to take two sessions at his Denton, Texas studio that had been cancelled by another artist. That was the start of a new collaborative co-production process for Lane.

"I wasn't thinking about getting past that other person working on my record, I was just thinking, 'Man, it's going to be fun to be in the studio when you get to pick the direction,'" says Lane. "And nobody was making me go their way on the previous records. All I knew was when I didn't like a bass line, I didn't know what I didn't like about it, I'd just scrunch up my nose and move on."