For The Avett Brothers, MerleFest is a coming home of sorts. This year's edition of the MerleFest "traditional-plus" music festival in Wilkesboro, N.C., the event's 30th anniversary, a milestone sure to be marked by many different special appearances and commemorations during the festival's four-day run, is no exception.

No appearance may be more significant or thorough, than the participation of The Avett Brothers, who will appear in some form on every one of those days. 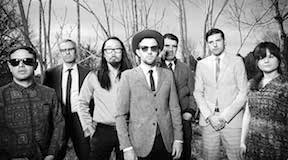 MerleFest has always been a perfect fit for the music of The Avett Brothers, North Carolina natives who continue to straddle the line between traditional Appalachian tunes, bluegrass, rock 'n' roll and pop music even on their most recent album, "True Sadness," which introduced more pronounced electronic and rock elements to the band's sound.

They are scheduled as one of the Thursday night headliners, playing a full band concert set. On Saturday, they will appear on the Hillside stage doing a set of old-time and country music drawn from the repertoire of festival founder Doc Watson, and on Sunday morning, the brothers will sit in with their dad Jim Avett for his gospel music hour. In between those will be a songwriting workshop with Scott and Seth Avett, a percussion workshop with drummer Mike Marsh, and Jim Avett is also playing another set during the weekend where one might reasonably expect his sons to drop in.

The brothers were no strangers to MerleFest even in their teens, having grown up not far from it. In a recent conversation from the road, Scott Avett recalled how it opened up new musical vistas for him and for his brother Seth.

The Avett Brothers - When I Drink (MerleFest 2010)

"I was probably 19 and just starting to sense an interest in music outside of the hard rock we were playing then, sensing my roots and the music of the region I was raised in," Scott Avett says. "Discovering Doc Watson was finding this perfect voice, he could translate old-time songs in a way that even if you weren't into it you would still get - he didn't fake it." Watson, and MerleFest, was an extension of that authenticity, he added.

"We gravitated to that, the festival radiated that whole vibe," Avett says. "We went three years or so in a row and saw people like Roy Bookbinder, Kelly Joe Phelps, Chris Thile when he was maybe 14 years old, and John Hartford was there, too."

Those first few years, the brothers attended purely as spectators, soaking in the music like the rest of us. As their own songwriting leaned more in the traditional direction, Avett recalled an important decision he and Seth made that set them on the musical highway they are still traveling. "It was around 1996 or 97 that I told Seth 'we're not coming back until we play it,' we loved it so much that we wanted to make it a goal to come and play MerleFest," Avett says. "We spent the next three or four years working on our music, to make that happen."

The Avett Brothers first official appearance at MerleFest was in 2004, and it was a brief one. "Our intro to the festival was the Cabin Stage between a couple of the main acts, we played three or four songs," Avett says. "We had been living for that moment, and it's not explosive - you go, and you're slightly moved, then you realize later what you experienced and you start cherishing it."

From that small moment, the group has played virtually every corner of the festival's space including the vendor tents in a famous busking outing in 2006 that saw them playing sans mikes, PA or even a stage. Even though they have long since graduated to headlining the Watson Stage, Avett remembers well those early appearances.

"When we first started with just banjo and guitar, I took Ramblin' Jack Elliott and Jonathan Edwards albums and that was probably 60 percent of our set, the kindred connection we had with that New York folk scene," Avett recalled. "Getting to see Elliott at MerleFest and be just 20 feet from him as he played, that was very raw and real."

As participants, it isn't just the stage performances that Avett points to as memorable. "We love doing the songwriting workshops, those are very personal and special for us," he says. "I remember judging the banjo contest and feeling very inadequate; our manager said 'how great a basketball player is Coach K?' (a reference to Duke basketball coach Mike ), and I went in feeling I was every bit qualified to do it; that was an awesome learning moment."

Sometimes it has been the other artists they get to witness honing their own sound that leaves a mark, Avett added. "Watching Gillian Welch for the first time was path-altering for Seth and I," he says. "That was the bridge for us between the dark rock 'n' roll and the light from the hills. She and David Rawlings, along with a North Carolina band called the Blue Rags that we saw elsewhere, really opened up those possibilities to us."

It is Doc Watson who remains the shining light for MerleFest and for the Avett Brothers in particular, however, both at the festival and everywhere they go. "Doc has driven us, and inspired us when we've wondered why we do this or who we do it for," Avett says. "It was that moment when he said to us 'Do it your way'."