For nearly a decade and a half, The Devil Makes Three has concocted an amazing blend of bluegrass, folk, country, blues, rockabilly and whatever happens to bubble to the surface, and applied it liberally to their songwriting ethic. The result has been an incendiary cross-pollination of old time authenticity and contemporary invention which the trio – guitarist Pete Bernhard, upright bassist Lucia Turino and guitarist/tenor banjoist Cooper McBean - has translated into their estimable catalog of four studio albums and two live recordings. 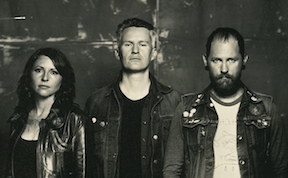 For the band's fifth studio album, Bernhard, Turino and McBean envisioned a thematic work exploring the duality of humanity, the push and pull between damnation and salvation, evil and good, carnality and spirituality. To that end, they chose a handful of covers that dealt in those issues, rearranged them to fit comfortably in The Devil Makes Three's oeuvre and recorded them live for the beatific and brutal "Redemption & Ruin."

From Bernhard's perspective, the concept didn't require much research on the band's part.

"In a way, it's always been a theme with our group," says Bernhard. "We're sort of like the world's worst wedding band. We don't do a lot of love songs. We do songs in the country/blues tradition of things going wrong or that feeling of not being able to do the right thing, no matter how hard you try. The other thing that inspired us is all the artists that inspired us to be the band we are, so this is kind of our chance to give a nod to all of them."

The Devil Makes Three - I Am the Man, played in Amsterdam

Some of those artists included Hank Williams, who recorded gospel music in his Luke the Drifter persona, as well as Johnny Cash and Jerry Lee Lewis, who occasionally showed off their religious upbringings without resorting to surreptitious nom de plumes.

"We thought, 'Wouldn't it be really cool to do one side of the vinyl that's all gospel songs and the other side is all drinking, drugs and heartbreak songs?'" says Bernhard. "They chose to do it separately, then do their own thing which was more of the outlaw/fuck you songwriting."

The other inspiration that fueled the conceptual form of "Redemption & Ruin" was the band's proposed physical structure of the album itself. There was nothing wrong with the band's plan to release the album in the vinyl format - "Redemption & Ruin" is currently available only on vinyl, but a download code is included with each copy - which naturally leant itself to the saint/sinner division of songs. Problems arose when they expanded that idea with an unworkable execution.

"Originally, we wanted one side of the album to be white and the other side to be black, but that is impossible, we found out, which was really too bad," says Bernhard with a laugh. "We also considered splitting it up and doing one clear album and one black album, but we ended up just doing it on black vinyl."

As for the songs themselves, The Devil Makes Three decided to forego original material in favor of existing work by artists they love, both famous and obscure. All of the material chosen for "Redemption & Ruin" went through the band's transformative process.

"We took some songs from public domain that don't really belong to anybody, and we kind of rewrote them," says Bernhard. "All the songs we kind of rewrote, to be honest, but some of them are from more modern artists and some we don't even know who wrote the song anymore, especially the gospel stuff. We spent a ton of time going through songs and we realized that doing a record in a concept is significantly more difficult that we assumed it was going to be."

As it turned out, there was a bellweather song for both the halleleujah and hellbound sides that helped to define the overall concept and lit the path for each group of songs in their respective categories.

"On the 'Redemption' side, 'I Am the Man,' the Ralph Stanley song, was the one that really hit me the hardest," says Bernhard. "It's obviously the story of Jesus' life in pretty brutal detail. It's also the most haunting. Ralph Stanley is a wizard at when it comes to writing a song that's really haunting and seems almost like it's ancient.

"On the 'Ruin' side, 'Drunken Hearted Man' was definitely up there for me. There's so many good songs on that side, man. We really are drawn to songs of hopelessness, for whatever reason. It's funny to sing other people's songs as well. Some of them, it's like, 'I don't know if I've ever actually felt this bad.' Some of them, Townes Van Zandt especially, are pretty dark. It's interesting to sing those tunes and think, 'I'm really hoping the guy who wrote this didn't actually feel that bad but he probably did.' Townes Van Zandt was close to that. He was a pretty amazing songwriter."

For the recording of "Redemption & Ruin," The Devil Makes Three took a page from their last album, 2013's "I'm a Stranger Here," and largely played everything live in the studio. It definitely heightened the authenticity of the finished product.