The Earls of Leicester rattle and roar

Something old is new again. The Earls of Leicester, fresh from their first release in late 2014 and the IBMA Entertainer of the Year Award for 2015, followed that remarkable success with "Rattle and Roar."

The Earls of Leicester play the songs popularized by, and in the musical style of Lester Flatt and Earl Scruggs. They were one of the first generation bluegrass bands (along with Bill Monroe and The Bluegrass Boys and The Stanley Brothers) that worked the local circuits in the southeastern U.S. in the 1940s and 1950s, touring relentlessly from the base of their radio station of the time and forming the foundation of traditional bluegrass as it is known today. While Monroe is credited with popularizing, some say inventing, the genre, Flatt and Scruggs added their own songs and instrumentalization to carve out a unique corner of the bluegrass sound. 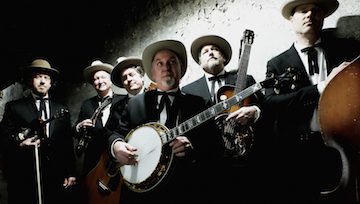 But, nearly 70 years on, they are a distant memory to most bluegrass fans. The sole surviving member of the Flatt and Scruggs band, Curly Seckler, has retired his tenor voice and mandolin chops.

Enter Jerry Douglas, the prolific Dobro master, record producer, sideman for Alison Krauss and member of bands, starting with JD Crowe and The New South (along with Tony Rice and Ricky Skaggs), Boone Creek and Strength In Numbers. Not to mention receiving 14 Grammy awards and countless IBMA and CMA awards to date.

The Earls of Leicester -

"Rattle and Roar" followed "The Earls of Leicester" to the top of the Billboard Bluegrass Album chart, and the band has played festivals from Maine to California and back in the last two years.

"A lot of people had forgotten about Flatt and Scruggs...about how that music sounded. There are tools that they used that are really missing these days," says Douglas. "The thing that Flatt and Scruggs did that was so great was (that) they didn't all play at once. You didn't hear too many things happening at one time that was a focus."

"They'd focus on the lead singer and one backup instrument that was behind him and not a lot of people crowding. In short, just people listening to each other."

Douglas, through his body of work, extending from traditional to newgrass, has a unique perspective on bands of today: "I think that bands benefit from listening to each other play."

"It's sort of like somebody's soloing, and they aren't playing too loud, and somebody is putting in too much information, and the focus on gone from whoever is in the spotlight at that point and really needs to be heard."

"Let it breathe a little bit," he advises.

"You don't need to hear everybody all the time. That's sort of something that's become a rule, that you'd need to hear everybody all the time. But, you don't. You need to have a focus in order to get a point across to the listener. We're playing music for the listener. We're not playing music to hear each other play and impress each other all the time when you're on stage. So, it's really just a different way of looking at it, and I really missed it. It just became noise to me a lot of times, and I know that it can be better than that. I've been in bands, and I know there are great players, and I'd just like to hear them better."

Speaking specifically of the Earls of Leicester project, "That was the prerequisite for making the record: for us to get back to that music a little bit. In our careers, we'd all left it somewhere behind. We started playing it, and we realized how difficult it really was." Douglas says sometimes the lyrics may be a little archaic ("Mother Prays Loud In Her Sleep"), but "it's the way it's stacked" that's important.

The commercial and critical success of the first Earls record was a bit of a surprise for Douglas, since the motivation in recording it was as much for the players and the bluegrass form as it was for the audience. Tim O'Brien (mandolin, tenor vocals) was on the first recording, now replaced by Jeff White. Shawn Camp is on lead vocals and guitar; Charlie Cushman on banjo, Barry Bales, who also is with Krauss, on bass and Johnny Warren, whose father Paul was in Flatt & Scruggs, on fiddle.

"Jeff White fits us like a glove," says Douglas. "He blends great, he sounds great. He's there to sing, and he does a great job at that." Hot Rize, another of O'Brien's iconic bands, had booked a string of festival reunion shows in 2015, and the Earls of Leicester caught the wave of their first release with substitute mandolin players (Russell Moore, Frank Solivan and others) sitting in on festival shows, sometimes on the same bill as Hot Rize. Douglas reflects, with a bit of wonder: "They folded, and we kept going."

"It actually set up a cool situation for us," he said, adding, "We had Frank Solivan sit in. And Russell Moore, who really knocked it out of the park. Vince Gill wants to do it. Ricky Skaggs wants to do it. It would be fun to have those guys even though you only get like two mandolin solos in the whole show (since) what we really need you to do is sing."

Douglas is realistic about the project as a long-term form. When asked to look forward to future Earls of Leicester projects, he offers: "I don't really want to keep rehashing Flatt and Scruggs songs. I think we can do it for a little while, but when we started this band we said that 'When this becomes work to us, we won't do it any more."

"We know that it has a shelf life, and we may have used a lot of it up already. But, while we've been here, we've made an impact, and the reception's just been great. And, we did what we set out to do, which was to put (Flatt and Scruggs) back in the big picture"

"They weren't just a musical group, they were a brand. They were one of the first brands in country music. They had sponsorships, they had TV shows and radio shows. They had some many things that were different from other bands. They had a woman manger (Louise Scruggs). They had a Dobro, which put them in a different genre, which allowed them to play more modern music of the time and give them another avenue, which gave them another way to go, which was closer to modern country music or even rock and roll."