Sam Bush is back with a new record, "Storyman," not that he ever went anywhere. Identified with The Telluride Bluegrass Festival, which he has played in one form or another for each year but one, he helped define the newgrass sound. Starting with Poor Richard's Almanac (along with Alan Munde and Wayne Stewart) in 1970, continuing to turns with New Grass Revival and Nash Ramblers, Bush has played fiddle, mandolin and mandolin variants (including slide mandolin) solidly since that time. 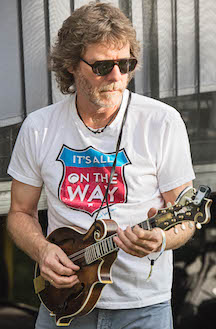 "Storyman," his first release in seven years, is a throwback in the sense that it is an album to be listened to and considered as a whole, distinct from the one-song-at-a-time consumption patterns of the popular streaming services of the day.

"The last five years or so, I've just been writing with my friends. I collected some songs and actually had quite a few of them, and for me, I still think about the entire package and tried to get the songs that really fit together. I still think of recording an album." Bush emphasizes, "I think of it as an album, building a project."

As for the delay between "Circles Around Me" and "Storyman," Bush let loose his signature chuckle and said, "2009 was the last one. You know 'sell no wine before its time'."

Bush's vocals are distinctive, but Bush knows when it works and when it doesn't. "Where's My Love" is a prime example. Bush recalled, "We cut 'Where's My Love' down in Florida at Destin Studios. There's a couple of songs like that when we got them when we could, and it really worked out. I wanted to fix a couple of slide mandolin licks on that song (after listening to a take), but I couldn't since I had caught the vocal."

Discussion of "Where's My Love" leads to an appreciation of Scott Vestal, one of Bush's sidemen in his touring band, and a real force on "Storyman." Bush says, "He's got a way that he presses the strings behind the bridge and makes kind of a vibrato tailpiece kind of sound. I don't know how he does it. I really don't."

"Vestal just plays for the song so well. On bluegrass songs, you'd swear it's J.D. Crowe. And he can improvise on par with anyone. And he didn't need to use his banjo synthesizer on this one. For me, he's the instrumental hero of this record."

Bush's varied influences are on full display on "Storyman." He's a country boy by breeding, but steps confidently into improvisation. These confluent threads run through the record. On the one hand, there's a spare number "Carcinoma Blues," co-written with the late Guy Clark. On the other is "Lefty's Song," an authentic throwback to storytelling songs as old as "Shady Grove" and "Goodnight Irene."

"It's a story of another time - a Sunday baseball player who forgoes his dreams and love to look after his deaf and dumb brother. "It's amazing that that song ever saw the light of day," says Bush, 64. "It was a true story about this guy Lefty in Kentucky."

"I wrote that back in the '70s with my friend Stephen Brines. Steve and I used to write together a lot. We literally wrote by mail. He would send the lyrics, and I'd sit in my kitchen working up tunes to go with them. On this song, The New Grass Revival liked it, but we never used it for some reason or another, and the song laid literally unused for 40 years. I got to thinking about this song. My daughter came down from New York where she lives, and we were going through all my stuff, and all of a sudden, there's that tape, a cassette tape, and I carefully rewound it with a pencil."

"I found the song and felt like it could be recorded," he says.

Bush, who once was described by No Depression Magazine as a "cubist mandolinist" stands astride the gap between newgrass and old time music. He's respectful of bluegrass and mountain music traditions, to the point where "Storyman" includes a nearly-forgotten form called a "country shuffle" in "Hand Mics Killed Country Music" on which he duets with Emmylou Harris.

Bush says, "It's a lighthearted thought, and I don't take myself too seriously. Some people might get offended by it, but we don't mean anything by it. I came up with that original thought. Emmy and I wrote this song after thinking about sitting around watching those advertisements on TV for Time Life records, the old black and white shots, and the country musicians identified with the instrument they played, and had it all behind the old single microphone."

So, Bush went to the source: "Pig Robbins, the great piano player in Nashville - he's the guy...who made that sound in the '60s and '70s on all these records. Of course he's still living and he plays great."

"I'd never recorded a country shuffle before, and as a matter of fact, I've never used a steel guitar on one of my records before. We were talking about this country shuffle. I called Pig Robbins and asked him to help us cut this song, to help us and guide us. I didn't want it to sound like a bluegrass song. I wanted to do a country song. He came in, and we cut it and he kind of helped direct us. I learned don't get a young guy to play like Pig if you can still get him. And he said "country shuffle? I haven't recorded one of those in 25 years."

But Bush is a master of the bluegrass form, as well, and another "Storyman" offering "Bowling Green" combines an origin story of Bush's father, together with samples of some of his favorite traditional fiddle tunes, Like "Soldier's Joy" and "Whiskey Before Breakfast." Bush says, "My father loved fiddle playing. Jon Randall came over and said 'I've got an idea for a song'. He pretty much had the first verse written out, already. We wrote with the idea that in between verses, we'd use fiddle tunes. My Dad called 'Soldier's Joy' 'Payday In The Army.' So, it's a song for my Dad."

Bush has enjoyed many collaborations, a strong touring band and great success in his career, but he's looking forward, not back: Of the "Storyman" process he says, "I had some other songs that were kind of electric stuff, rock and roll kind of songs, and I'll do them sometime." Play on.