Ladies and gentlemen, The Infamous Stringdusters

Nearly 10 years on, The Infamous Stringdusters have carved out a singular place for themselves in the bluegrass/jamgrass world. The Stringdusters tour aggressively, are fixtures on the festival circuit and released several intriguing recording projects since late 2015: an EP of covers, including Tom Petty's "American Girl," and a full-length album of songs collaborating with some of the finest female singers in the Americana genre ("Ladies and Gentlemen"). 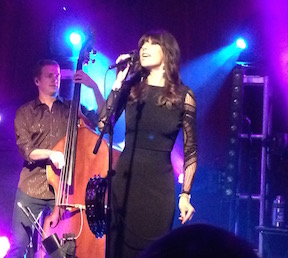 Along the way already this year, they headlined at Red Rocks outside Denver and continued their collaboration on the Grateful Grass project.

Their live shows lie at the core of The Stringdusters' success. The five-piece (Chris Pandolfi on banjo, Travis Book on bass, Andy Falco on guitar, Andy Hall on Dobro and Jeremy Garrett on fiddle) rip into 20-30 songs a night in their stage set and never let up.

The Stringdusters' fans are an integral part of their touring success. "The Jamily, we love the Jamily," says Falco. "It's really amazing when you get to the point where you know these people who know the music intimately. New fans are kind of cautious, but you get (The Jamily) kind of showing them the ropes, how it goes. We have a very loyal fan base, and they are just amazing people. They love to come out and have a good time, and they are really in tune with the music. It's a really special thing to see those faces out there in concert."

"They travel really well, they come along to the shows, and it's really inspiring."

Falco reflects, "We were at a point in our career when we could try something fun and different and challenge ourselves a little bit. It's really exceeded our expectations. All the ladies just did such a standout job. It was sort of big question, even for (the band) when we did it. How are we going to tour a record like that where every track has a different female singer, and that was a good question."

The answer was Nicki Bluhm. "She really just brought it all to the table," says Falco, "She's really versatile and really integrated into the band, and we really couldn't have been more pleased."

"The shows really flowed well and it far exceeded our expectations"

The band's lineup has been stable since 2011, which also impacted the "Ladies and Gentlemen" dynamic, according to Falco. "We do collaborations here and there at festivals, but to do something on this type of a scale is something that's totally new and different for us. We like to challenge ourselves and to grow as artists. It helps to write songs for other artists. We were writing songs for the ladies, and it's a different kind of perspective that we were trying to capture. It helps you grow as an artist."

In contrast to other years, The Stringdusters have pulled back on their constant club touring. Falco explains that sometimes, "It doesn't make sense for us to just get in the bus and go out for weeks at a time. It makes more sense to bounce around and hitting as many of the festivals as we can do."

"In the meantime, we are working on our next record. We don't all live in the same place. Generally, we write in rehearsal time, pre and post time. We add some time on the front or back end of festivals and get together that way."

The individual band members also work on individual projects, and Falco says, that feeds the energy of the collaboration. Falco lives on Long Island, New York and plays regularly with his brother there. Banjo player Pandolfi has issued a project under the title "Trad+," Garrett has a solo album, and Book appears with his wife Sarah Siskind as Sunliner near their home in the southeast.

Not long ago, The Stringdusters headlined a show at Red Rock Amphitheatre in Colorado: "That's got to be one of the greatest venues ever created," says Falco. The Stringdusters appeared with JJ Grey and Mofro. "His band is more a soul band kind of thing, and it really worked well. It was a really exciting show."

The two bands closed with Grey's "Lochloosa," a smooth three-chord progression that allowed the combined group to explore outer limits of the form: "He (Grey) let us have at it, and it was really fun. I come from an electric background, and his style is where I come from. It was really fun and a real honor to play at Red Rocks."

"There was a time in the industry where you toured to support a record," says Falco. "These days, it's the other way around."

"A record is still an artistic statement; it's a way for a band or an artist to put a collection of songs together, to make an album and say something musically. But on the industry side of things, it's expensive to make a record."

Streaming services have their advantages to getting artists known to allow fans to share in the music, but, according to Falco "It does change the dynamics on the business side, spending money on a record and figuring out how to make that work."

"It's good for fans put together songs to have something tangible," but, "when you are making a record, you're really sort of making your bread and butter going out and touring."

The live shows distinguish The Infamous Stringdusters, and they work hard to share them with their fans. Falco says, "All of our shows are multi-tracked. We develop as artists live, as a form."

With all these moving parts, The Infamous Stringdusters continue to expand their musical boundaries and cement their reputation as one of the finest live bands extant.