Freakwater tells its tales on "Scheherazade"

Janet Bean and Catherine Irwin have been together as Freakwater for over a quarter of a century, which gives their creative pairing at least the outward appearance of a marriage. And while Bean and Irwin haven't even lived in the same city for the entirety of Freakwater's existence, their simultaneous conversation via conference call to discuss their new album "Scheherazade," the duo's first new album since 2005's "Thinking of You" and debut for Bloodshot, finds them finishing each other's sentences, talking over each other and generally cajoling and regaling each other with a familial vibe that characterizes their long creative relationship. 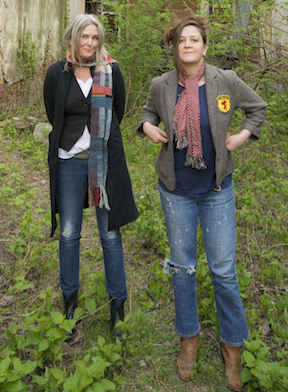 Case in point: Freakwater reunited after the 20th anniversary reissue of 1993's "Feels Like the Third Time," and played shows in 2014, which was, in fact, the duo's 25th anniversary year. When asked if they did anything to mark that momentous occasion, Irwin sought to clarify the year of their actual launch, and with 1989 verified as the year of the duo's first album, Bean reacted with mock indignation.

"Catherine!" she yelled. "You forgot our anniversary again! It's so indicative."

"It really is," says Irwin with a laugh. "Once you're so old, I feel like we don't really live in the past. Janet and I both have some sort of OCD involving numbers. I don't know what it is. I can barely add, but I do enjoy long sequences of numbers."

In recent years, the wheels of Freakwater have ground exceedingly slow, right up until they shift into high gear. With the release of "Scheherazade," Bean and Irwin have notched 3 Freakwater albums in 16 years and 10 albums total since their 1989 eponymous debut, not a terrible average by most yardsticks.

"We weren't making 'Chinese Democracy,' or whatever the hell it was," says Bean of the long gap between "Thinking of You" and "Scheherazade." "We will. The next one will be from the retirement facility."

Of course, Bean and Irwin don't exist in states of suspended animation waiting for inspiration to strike, so the Guns N' Roses reference is aptly placed. Bean is a member of Eleventh Dream Day and the Horse's Ha, and released her solo debut, "Dragging Wonder Lake," in 2004, while Irwin has two solo albums under her belt, 2002's "Cut Yourself a Switch" and 2012's "Little Heater," and she's moved into the visual arts as well. This has kept the pair individually busy while waiting for Freakwater's edgy, atmospheric electric/acoustic folk to collectively resurface.

The songs for "Scheherazade" began to bubble in early 2014. Bean and Irwin convened in their hometown, Louisville, Ky. (Bean has called Chicago home for three decades), and worked up songs with violinist Anna Krippenstapel, then tested the live waters.

"The three of us played in the cellar of this restaurant in Louisville, just to see how they'd go over," says Bean. "Then I came back down in November. We practiced again. Then we started recording."

"We had six or seven days of recording then we mixed it at the end of April," says Irwin. "We didn't spend a year in the studio."

One of the big departures in Freakwater's studio approach on "Scheherazade" was the idea of playing as a band during recording, something the duo and longtime bassist David Wayne Gay hadn't really done since 1999's "End Time." Since then, they've preferred to stock the studio with a rotating cast of guests, but with addition of Krippenstapel, electric guitarist Morgan Geer and drummer/pump organist Neal Argabright, the band construct solidified.

"We realized that whenever we went on the road we would bring someone in to play the color parts, and while they've always been really nice people, it hasn't always been for the betterment of the actual performance," says Bean. "When we did the anniversary tour for 'Feels Like the Third Time,' we brought Jim Elkington in, and he sounded so good, and he was listening and being super sensitive to what Catherine plays because she plays so beautifully you don't want to cover it up. We decided that when we went into the studio, we went in as a band, and we were prepared as a band. And when we came off of those shows, we were like, 'Wow, there really is something inherently special about the way we sing together.' It was kind of recognizing the things you lose sight of over long hiatuses or when things are sort of not as fun. We came off that, and we had this renewed energy about what is good about what we do."

As the new Freakwater songs evolved - including "Bolshevik and Bollweevil," with the irresistible folk lyric, "Come on home if you can find it, because the farm is blown away..." - so too did the idea of naming the album after Scheherazade, the mythical/historical wife of Persian king Shahryar who spun the tales of "One Thousand and One Nights" to avoid her demise at the hands of her husband, who killed his wives after their wedding night to avoid the infidelity that ruined his first union.

"If you stop talking, you die," says Irwin. "To me, that sums up both the beauty and the problem of Freakwater. It is true, in a way, that we probably wouldn't be able to do this anymore if we did stop. The idea that you have a story and you keep it going and if you stop, you'll be executed, that is the story of a band, in a way. It seems like a relevant idea, certainly based on our between song banter style."

The album's title helps to define Freakwater's songs within and also follows the tradition of the name itself throughout history.

"We created this image for the cover so you get this sense when you look at it that there's been some shit going on," says Bean. "When we were trying to think of names, Catherine came up with that one. So many things have been called that, but we couldn't think of anything recently, in popular music, and it's such a beautiful word."

"And it's also going to be great when we launch our line of perfume," says Irwin. "The idea of selling it as Freakwater doesn't sound quite as appealing. And then there's the awesome costumes we'll be wearing. People will be blinded, basically."

Considering their long hiatus and the number of musical/life activities that occupy their free time, it's a wonder that "Scheherazade," or even Freakwater itself, exist at all. Bean insists she and Irwin, like water searching for its level, will always find a way.

"Short of being hit by a bus," she says. "We agree to shows, thinking, 'We'll be hit by a bus before that happens, so we don't have worry about doing it.' So, I think we figured if we survived, we'd make another record. Goals have never been one of our, uh, goals."

"If we had a goal, we would have stopped a long ago," says Irwin. "Not having goals is the reason we're still doing this."