The Grascals embrace the change

The Grascals are a well-established collection of players, featuring a six-piece mix of some of the most talented musicians in bluegrass. What happens when there's some turnover in the lineup of an established band? It either gets better or goes home. With "And Then There's This..." on Mountain Home Records, there's not much likelihood of The Grascals sticking home, unless it's their own choice. 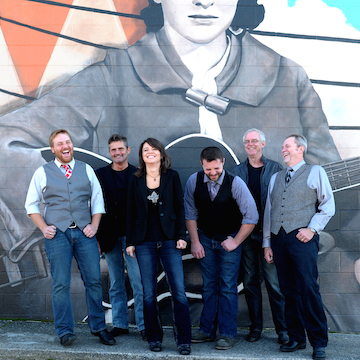 The pedigree of The Grascals extends back to The Osborne Brothers. Co-founder and guitar player Terry Eldredge started backing Grand Ole Opry staples Lonzo and Oscar in the 1980s and joined with The Osborne Brothers in 1988. Danny Roberts started The New Tradition band, and after many years with them and a bunch of session work, he joined up with The Grascals.

Along the way, The Grascals added some members and lost some others. But, the current lineup has been touring since 2013, and features Eldredge, Roberts, Kristin Scott Benson on banjo, John Bryan, bassist Terry Smith (another Osborne Brothers' alumnus) and fiddle player Adam Haynes, who played with Larry Stevenson's Band and Grasstowne.

Haynes and Bryan are the two newest Grascals, and the new record retools the band's sounds to take advantage of their skills.

Benson says that the re-cast Grascals have a different emphasis, due to the strong vocal skills of both Eldredge and Bryan. "I would say now that we are more vocally driven than some other bands that you might hear," Benson says.

This record is the first Grascals effort to feature Brayan's singing since he joined the band in 2013. Founder Jamie Johnson operated as the focal point of The Grascals stage show before he left, acting as MC and singing lead vocals. Now, with Bryan, The Grascals have a powerful tenor with great range in Bryan. "Bringing John in could never replace Jamie, and we knew that it was going to be a big transition," Benson says.

But Bryan "has just knocked it out of the park," Benson says. "The band's style is the same, but I think now the sound of The Grascals is very different. We just feel like we're super blessed. Because replacing a player is one thing, but replacing a singer is a big deal. It's effortless for him. (Bryan) is young, and he's got a lot of stamina. The youthfulness is a great asset to us all."

"And Then There's This..." features a wide range of tunes. The process of choosing songs for recording starts out simply, but in the end, what the band does with the songs establishes the aural fingerprint for a record and the stage shows that feature the selections. Like many bands, The Grascals collect songs that they think suit the style of the six-piece, but Benson says, "we are really putting it in the hands of Terry Eldredge and John Bryan because you can't expect a singer to sing a song that they don't believe in. Any band is driven by the vocalist when you are choosing material for a record."

"But we all do bring ideas to the group, and with six people, it creates quite a pool of songs to choose from."

The disc demonstrates the variety of choices band members tossed into the pool. The subjects range from loss to spirituality, from paddle boats (Carl Jackson's "Delta Queen") to trains (Williams (Bill) Castle's "I Like Trains"); there's a Brice Long tune, "A Place To Hang My Hat," originally recorded by Porter Waggoner, and the CD concludes with "Highway of Sorrow," a song first recorded by Bill Monroe in 1961 and co-written by Monroe and Pete Pyle. The Waggoner song shows The Grascals' focus on the songwriters. Benson says that the band did not even know Brice Long's tune had been recorded by Waggoner until an in-studio radio appearance when their version was followed up by Waggoner's. "We had no idea that Porter had recorded it. We weren't influenced by any artist cut, but by the songwriter's cut," says Benson.

"And Then There's This..." is designed to be heard and enjoyed as a whole, not just through its individual parts, says Benson. "There has to be balance there. But, for us, it's always just, what are the songs that we really like?"

According to Benson, recording studio time tends to focus the choices. "Once you get some time on the books, that's when this band gets serious about it. We'll just be listening for several weeks. The most time consuming part of the whole process is listening to material. It actually goes extremely quick once we start recording. We did all the vocal tracks in a day or so, with another day for our instrumental fixes, even though our material is chosen over several weeks or months."

Benson, a multiple winner of IBMA's Banjo Player of the Year award, is nonetheless modest about her playing; "My style is just a melody-driven approach. I try to play tastefully within whatever situation I am in. I never run out of ideas when I let that drive me, whenever I try to complement with what the singer is doing and honor the song."

Like most bands these days, particularly in unique musical genres like bluegrass, The Grascals record to support touring. This, of course, is the opposite of the historical model in which touring promoted album sales. But the economics of the music business have turned around, except for mainstream sales machines like Taylor Swift or Adele.

Benson thinks that this is the way to go and is happy for the current model. "We make our living by playing live. And therefore, we're out about every weekend." The Grascals stay relatively close to home in Tennessee and go on the road for, at most, one or two week stretches. A few times a year they will stretch a tour to include some festivals, and, this year, are even playing a festival in Haines Junction, Yukon Territories, along the Trans-Canada Highway.

But, for the most part, they don't stray far from home base. Part of the problem for a bluegrass band, according to Benson, is finding dates in the early part of the week, to support being on the road for weekend dates. Airplay supports the touring, and Benson credits Sirius/XM's Bluegrass Junction channel for extending the reach of the genre. "The best thing that's happened, airplay-wise, is Sirius XM. Now there's a 24-hour outlet nationally and internationally for people to hear bluegrass. That's the best thing for our exposure ever."