The Statler Brothers were an iconic vocal group in country music. They began by backing Johnny Cash (not a bad early gig, for sure), and went on to win the CMA award for Vocal Group of the Year an astounding 8 years in a row between 1972 and 1980. The group is in both the country music and gospel music halls of fame and has won three Grammy Awards.

Tenor Jimmy Fortune replaced Lew Dewitt in 1983, and continued with the group for 21 years. Now, Fortune has just released "Hits & Hymns," and it's an album that is a half Statler Brothers hits, half hymns and spiritual songs. 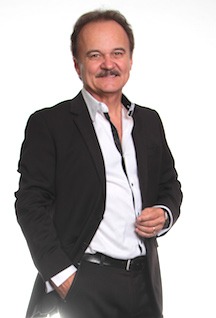 One wonders, though, why Fortune chose to make an album that's half one thing and half another.

"A lot of the Statler Brothers fans, they love the old hymns," he explains. "Songs today just aren't being written like that. And also we wanted people to be able to put a face with a name. Hearing songs like 'Elizabeth,' 'Too Much On My Heart' and 'More Than A Name On A Wall' were songs I wrote with the Statler Brothers. So, we wanted to let people know some of the things I did with the Statler Brothers. Because, let's face it, a lot of people don't even know I'm out there. I've been out there doing this thing for about 13 years now, but I've never done it on a big platform. I've been flying under the radar, so to speak. So this is kind of me coming out in the open with songs that are favorites of a lot of people."

Many of these songs, like "Far Side Banks Of Jordan" and "Precious Memories," are as much country classics, as they are spiritual favorites. Others, such as "How Great Thou Art," "Rock Of Ages" and "Victory In Jesus" are songs that will forever be sung in country churches everywhere. Although "Danny Boy" won't likely be sung in many churches, this favorite Irish ballad nevertheless has a hymn-like quality to it that also makes it fit.

In addition to a fantastic selection of songs, Fortune had help from some mighty talented musical folks. The Oak Ridge Boys, for instance, sing on "Life's Railway To Heaven," while The Gaither Vocal Band add vocals to "Just A Closer Walk With Thee." To give Fortune's take on "Amazing Grace" that little extra oomph, Vince Gill and Sonya Isaacs help out on it vocally.

A goal of this project was to take familiar material and present it in a new and different ways.

"One of the things Ben Isaacs, who produced the album, said – and I think it's brilliant – 'I want people to hear this, even though these songs have been done and recorded by other artists for so many years. When they listen to it, I want them to be hearing it for the first time.' And boy, that was a brilliant thing to say because when he told the musicians that it just opened up the floodgates of creativity."

This could very well have been an album of new songs, but Fortune knows that folks sometimes liken the music they enjoy to comfort foot. "People like familiarity," he says.

"There's one new song on here," Fortune notes. "It's called 'If I Was God.' We felt there was a powerful message in it, and it makes people think. The real premise of the song is that it's a good thing we're not God because we can't do the things God can do. And we don't have the wisdom and the grace and the forgiveness that he has. Thank God, God is God, and we're not."

"We wanted to put that on to let people know that I am still creating and writing new stuff."

So impressed was everyone with the recorded output from this project, it was decided to expand it project into another medium. "It started out just being a CD," says Fortune, "but when we sat back and listened to it, Bill Gaither said, 'This really needs to be a DVD as well.' So, it's kind of taken on its own wings and it's a 'God thing,' is the only way I know how to describe it. Things have happened with it that I can't explain."

Fortune is thankful to have the backing of Gaither, an icon in Christian music. Along with his wife Gloria, Gaither wrote some of the most popular Christian praise choruses, including "Because He Lives," "The King Is Coming," Something Beautiful" and "Let's Just Praise The Lord." He also founded the Gaither Vocal Band. And with his Gaither Homecoming series, he's remained relevant as both a touring act and a TV star.

"It's great to have an organization like the Gaither organization behind something like this because there's an audience out there. When it comes to business, there isn't anybody better than he is. He knows his audience, and he knows how to put it all together."

Gaither promotion has taken Fortune to the next level as a solo artist. "My wife does the business end of what I do, and we did it on a small scale. I've never went out and really promoted myself, other than just going out and doing concerts and a radio interview now and then. So when we got hooked up with Bill, he's got so many people around him that do their job and do their job well, it's like a well oiled machine. And when you start into it, already people are interested. And they say, 'I didn't even know you were out there. Still out there singing.'"

It's never easy to go solo, especially when you've been with such a popular group as the Statler Brothers. As good as it is to be part of a beloved group, one of the down sides is that you're sometimes seen as just one member of a collective, not as a valid individual artist.

Fortune believes Gaither fans will be drawn to this new music, just as longtime Statler Brothers fans will enjoy it. "There's also an audience out there that remained after the Statler Brothers stopped doing the TV show. We knew there were millions of people out there starving for a simplicity of music – being able to hear the words, for lack of a better thing to say – just to be able to feel those old songs again. And I think that's what we've accomplished in this."