Thanks to Wills, AATW remains the king

After over 40 years of touring and recording as the founder, lead guitar and front-man for Western Swing music's standard-bearers, Asleep At The Wheel, Ray Benson has a lot of irons in the fire these days. In fact, with his TV show Texas Music Scene a hit throughout the southwestern U.S. and touring in support of AATW's new release, "Still the King: Celebrating the Music of Bob Wills and His Texas Playboys," he is as busy now as ever. 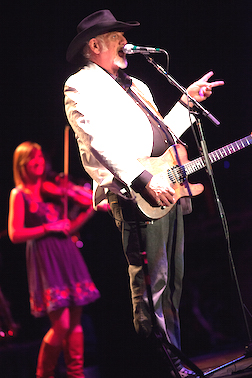 "Still the King," which came out in early March on Benson's Bismeaux label, is AATW's third album featuring songs from the Wills catalogue. One might wonder about the band going back to the well one more time.

"Well it's, a pretty deep well. Going back to our first albums, we have always included Wills music. Besides, it was my son, Sam (Seifert, co-producer on the project) who kept bugging me about it being time to do another Bob Wills project. He said that it had been 15 years since the last one, and there seemed to be no shortage of artists who wanted to participate."

Asleep at the Wheel sings

In some ways, each of the three Wills tribute serve as a type of time capsule in terms of what was going on in country music at the time of their release. The first two paid homage to older more established acts, while taking the opportunity to let some relatively new acts shine as well. In 1993's "Tribute," relative newcomers Brooks and Dunn and Garth Brooks were along for the fun, while in 1999, "Ride With Bob" featured Lee Ann Womack and the white-hot at the time, Dixie Chicks. "Still the King" carries this tradition even further by featuring over 10 acts that have recently, or are just now, coming onto the scene in a big way.

While many acts featured on "King" have had a ton of national success and some, like The Avett Brothers and The Old Crow Medicine Show have had a lot of national exposure in recent years, this album spotlights a few acts with a lesser profile (Kat Edmonson, Katie Shore).

"We never have any trouble getting artists to participate on these projects, but not all the folks that we asked could participate due to scheduling or timing or whatever. Some have to say no. Kacey Musgraves really wanted to be on here, but her schedule had gotten so crazy that she just couldn't get it in. We tried a few times, but we had to move on. I would have liked for that to have worked out, and she was disappointed since she loves Wills' music. Of course, Willie made it on. He's my best buddy, but his track on 'Navajo Trail' was cut almost four years ago. It's a pretty famous song from a Roy Rogers movie. We put the Quebe Sisters on that one, too. We were looking for an Andrews Sisters kind of sound. I've known the Quebe's a long time. They're great girls, so talented, and they have a love for the music. I knew that it would turn out great."

"It's fun to work with people who love and respect the music and who want to be involved with the project. Some of these guys, Merle, Willie and Lyle Lovett have been on all three albums, and some, like Vince Gill and George Strait, have been on a couple (including this one), and we always try to have any former Playboys that we can get to participate as well. There aren't many of them left, but we had Leon Rausch come sing again, and Billy Briggs came in to play a nice sax solo, at 92 years of age."

The tandem of Benson's participation as host of the syndicated "Texas Music Scene" TV show and his recent work with his son/co-producer seem to be a recurring theme in relation to the new record.

"Well it certainly has helped me keep more in touch with the Texas Music/Red Dirt things that are going on right now. I get to hear some of the groups that I may not have heard of too much, but, I've been making music for a long time and I have crossed paths with many of these acts often over the years."

"For example, I had never heard of The Devil Makes Three, but Sam said, 'You've got to hear these guys.' I did, and I loved what they do. I think they do a great job on 'Bubbles in My Beer.' Sometimes things just work out. I was looking for that roadhouse 1940's feel on a few of the songs, and that's what Amos Lee and Pokey LaFarge do, so they were naturals for their cuts."

The Time Jumpers contribution "Faded Love" was one of two songs repeated here from earlier tributes. Featured on the track along with Benson, Vince Gill, and Ranger Doug (of Riders in the Sky,) is Dawn Sears, long time Nashville veteran and vocal virtuoso in one of her last recordings before recently losing her long-time struggle with cancer. "We knew that she had been sick for a long time, but she came in that day and just nailed her part. She was just perfect. I'm so happy to have gotten her on the record and want to say that none of that could have happened without Vince setting everything up and using his studio. I've known him and the guys in The Time Jumpers a long time, Paul Franklin used to be in AATW, but it was a thrill to have them and especially Dawn, on the record, particularly on a song like 'Faded Love'."

Other than the continued efforts of the nine-time Grammy winning AATW, some trace the resurgence of Western Swing music and Wills in particular to the Wills tribute album put out by Merle Haggard back in 1970.

"Merle kind of set this tribute-type thing up in a way, and he's been on all our Wills tributes since the first one. This time he recorded his vocals at his home in California. It is a long way to Texas from there."

With Hag's well-documented love for this music, it seems fitting that he duets with Emily Gimble (AATW pianist and granddaughter of Texas playboy's fiddle great, Johnny Gimble) on "Keeper Of My Heart." "She knows the history of the music, sings like an angel and plays like one too," says Benson. " It was a no-brainer to have her on there."

One might wonder how it feels to share the spotlight over the years with so many other acts, but Benson sees that as a privilege. "I've always been blessed with a distinctive voice. It stands out a bit, but this has always been about the music for me and the rest of the band. We love Western Swing music and are proud to represent it. By working with all these acts over the years and the new acts today, we are able to bring this music to a new group of fans who might not hear it otherwise. I'm proud of that. I'm not sure we'll get to do this again, but like I said, it's a pretty deep well. We love this music and have never shied away from it. You never know."